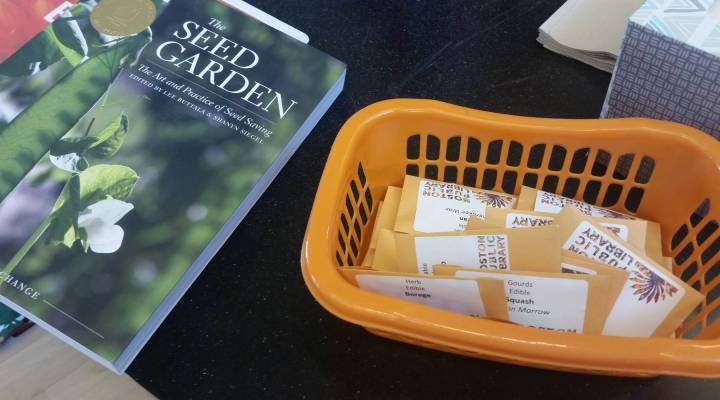 COPY
Library patrons in East Boston can check out gardening books and take seed packets home with them. Daniel A. Gross/ for Marketplace

Library patrons in East Boston can check out gardening books and take seed packets home with them. Daniel A. Gross/ for Marketplace
Listen Now

The word “library” technically means “collection of books.” But nowadays libraries lend out all kinds of stuff — from screwdrivers to spatulas.

Glenn Ferdman directs the Somerville Public Library in Massachusetts, and a couple years ago, he decided he owned too many guitars. So he told his staff to lend out his guitars as if they were books.

“What we discovered, to our delight, is those items started flying off the shelf,” Ferdman said.

Soon, donations added a ukulele, an African hand drum, even a telescope. He sees the project as part of a trend.

“Libraries have in recent years become places not only where you can passively absorb information,” he said, “but places where you actively engage with and create stuff.”

Ferdman thinks “libraries of things” are a low-tech alternative to high-tech hobbies. According to the American Library Association, there are similar projects underway in more than a dozen states.

Arun Sundararajan, an economist at NYU, said your local library is also part of the sharing economy. “People go there to get access without ownership,” he said.

Sundararajan believes that libraries can help reduce inequality. A guitar costs hundreds of dollars. But a library card is free, and it gives you access to community.

“It’s almost like the library…is really the gathering place of people with shared interests,” Sundararajan said.

One library in East Boston has even become a distribution point for packets of vegetable seeds for gardeners. Djaz Idakaar, a youth services librarian, said local kids work in a nearby community garden and take seed packets home.

“I have a lot of basil,” Idakaar said, shaking small brown packets of seeds. “This is borage, and these are tomatillo seeds.”

The seed packets are stored inside wooden drawers that used to house a library card catalog. But libraries don’t use card catalogs anymore. This is the age of the internet, after all.