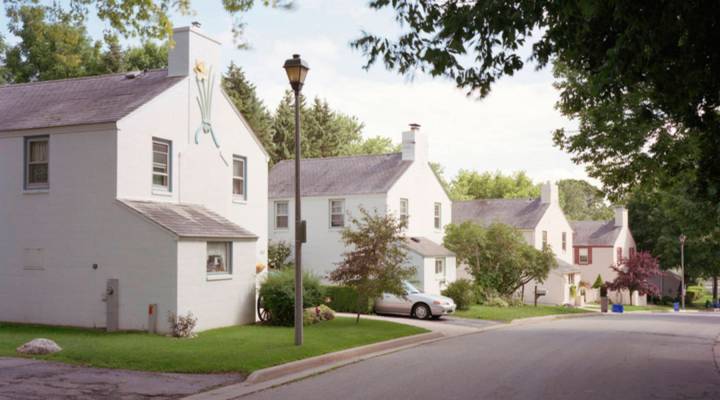 The U.S. government tried a different approach to public housing during the great depression by creating entire towns that were federally planned and subsidized. The idea was to build communities where poor Americans and displaced farmers could work. Only three of these “greenbelt towns” were built before the project ended. But those three towns still stand today as a reminder of the New Deal’s history. Jason Reblando is a photographer with a book coming out on the greenbelt towns, called “New Deal Utopias.” Marketplace host Kai Ryssdal spoke to him about this enduring piece of American history. The following is an edited transcript of their conversation.

Kai Ryssdal: How did you find these greenbelt towns?

Jason Reblando: I first started photographing public housing in Chicago. I was photographing in the high-rises on the South Side and I eventually found out about another public housing complex on the North Side of Chicago called Lathrop Homes. It was very idyllic and it had lush green courtyards. I found out that it was built in this “Garden City” style. And when I learned about that, I learned that it was developed by this Englishman named Sir Ebenezer Howard and his idea was to combine the best of the town and best of the country, meaning the social and economic advantages of living in community with each other, with the fresh air and open green spaces of nature. So those Garden City principles were applied to the greenbelt towns and the towns are located in Greenbelt, Maryland, Green Hills, Ohio, and Greendale, Wisconsin.

A gazebo in Greendale, Wisconsin.

Ryssdal: Tell me about them, when you go to them today, first of all can you tell that they were planned and organized and sort of built as these community centers?

Reblando:  Absolutely. I mean the first time I had visited them, you cross the border and I was just stunned. I really felt like I was in a different time. And they were these small modest houses and they looked like they were from England. They also have these lush courtyards, common green spaces. And they were conceived in 1935 and they were conceived as a solution to the Great Depression. So the idea was that it was a job creation program but also a housing program.

Ryssdal: They only lasted it should be said like 18-ish years, right? By 1952, there was the whole Communist thing and people were upset about the idea of communal living and communal cooperation but also they were expensive.

Reblando: Yes they were controversial from the start as far as cost overruns and also of the communal cooperative aspect that was kind of built into it. So by the 50’s they were transferred to private developers and homeowners. And I think that was probably a good thing as far as not having the government be the landlord forever. And I think people feel real ownership of the community.

Ryssdal: When you talk to people who live there, what’s the sense?

Reblando: They can’t hide their greenbelt pride. People really love living there, particularly the people that I met in Greenbelt, Maryland. They are still living in a cooperative model. So if your neighbor’s roof needs fixing, it comes out of this communal pot so it is cooperative.

Ryssdal: But you can’t just do any kind of roof you like, right? I mean with the money comes the rules.

Reblando: Precisely. So there are committees. I think that’s all within the auspices of historic preservation and preserving the character of the place. And that’s you know another way that people stay connected to the New Deal.