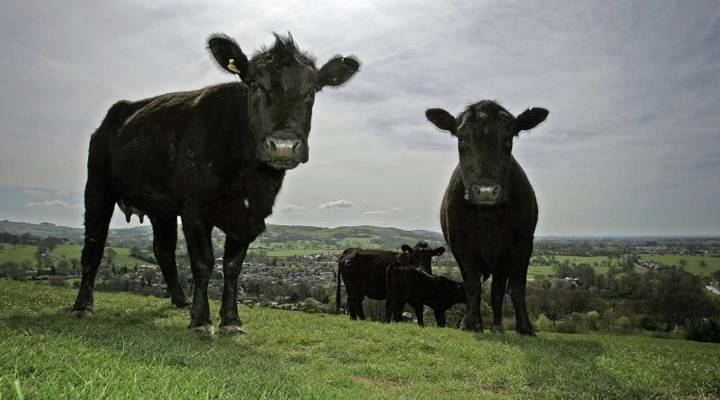 President Trump has promised a “big, big” free trade agreement with the U.K. once that country leaves the European Union in 2019. The British cabinet is, however, split over the prospect. Some ministers believe that Britain should clinch a deal with the U.S. at any cost. But others fear that a free trade deal would lift the existing European ban on the importation of some controversial American farm products and that could undermine British food standards.

American chlorine-washed chicken tops the list of products that are causing concern. European critics say that the American practice of rinsing slaughtered chickens with disinfectant to kill bacteria implies a lower standard of animal husbandry.

“In the U.K., we’re used to seeing beef cattle grazing outside in a natural situation, whereas in the U.S., they’re raised in intensive rearing pens and they’re given hormones to make them grow faster,” Krebs said.

The U.S. farm lobby dismisses these objections as protectionist and hypocritical.

But the big fear is that American farmers, benefiting from huge economies of scale, will flood the British market with cheap produce and trigger a race to the bottom. Food prices could plummet, dragging down animal welfare, environmental standards and even food quality.

Tim Lang, professor of food policy at City University, forecasts that a free trade deal between the U.S. and the U.K. will spark a battle over food culture in Britain.

“Since it has been a member of the European Union, Britain has ratcheted up its standards,” Lang said. “The people have got better food, there’s more diversity. There’s a Europeanization of culinary culture. And we’re going to see whether it becomes the McDonaldization of culture.”

Britain’s farm and environment minister, Michael Gove, insists these fears are misplaced and that the U.K. will not dilute its food standards in pursuit of any trade deal.

But the trade minister, Liam Fox, has been much less emphatic.

“We must keep an open mind on these issues, and anyway, a decision on the terms of any U.S.-U.K. trade deal is still a long way off,” he said.