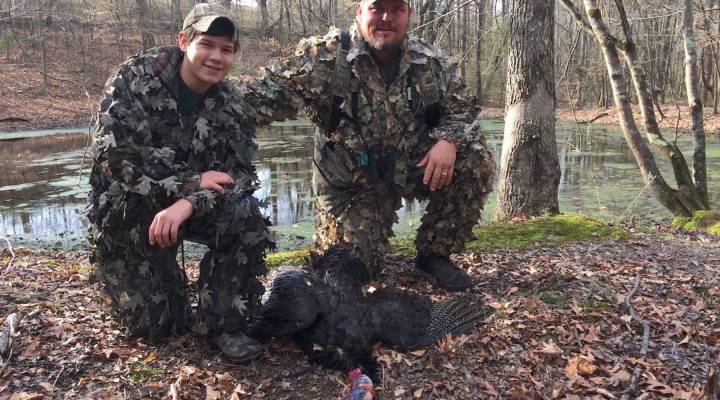 COPY
Leith Konyndyk kneels with his son's first turkey, which they took home to clean and turn into barbecue. Blake Farmer/for Marketplace
Way of life

Leith Konyndyk kneels with his son's first turkey, which they took home to clean and turn into barbecue. Blake Farmer/for Marketplace
Listen Now

Fewer Americans are waking up before dawn, putting on camouflage and toting a rifle into the woods. Young people, especially, are slower to take up what has become — for most — an expensive hobby. But many hunters hope to pass on a love of the game to the next generation.

Leith Konyndyk, an experienced turkey hunter, looks a little like a sound effects artist: he has a half dozen instruments in his camo pack meant to attract a big gobbler in the woods of Lincoln County, Tennessee. One is called a box call — a wooden paddle and what looks like a mini cigar box.

“The Native Americans probably would have had stuff like this,” he said. “There’s nothing special about it, but a lot of turkeys have died because of it.”

Konyndyk keeps his voice low as he describes learning how to use all kinds of turkey calls from watching his uncles.

“You ever seen a diaphragm call? This one is brand new, untouched.” He sticks a piece of plastic in his bearded cheek, which creates a loud cawing sound.

Konyndyk makes his living as a game warden and has a studious appreciation for one of the oldest industries in America.

“Hunting and trapping is why we’re here. If it wasn’t for beaver skin hats that people wanted in Europe, we wouldn’t have spread westward, and the Hudson Bay and Northwest Companies wouldn’t have ever established trapping posts,” he says. “[Hunting] had a lot to do with our foundation of who we are today, and I think that’s what we’re trying to pass on.”

Konyndyk has seen the national trend lines — a fairly steady decline in the total number of hunters since the 1970s.

According to U.S. Fish and Wildlife data, the number of licensed hunters is down from a high point of nearly 17 million in the early 1980s to roughly 15 million today. The national drop has come over a period that the country has grown by nearly 100 million people, meaning the percentage of Americans who hunt is down considerably.

Still, Konyndyk’s state of Tennessee is near its all-time high with 717,000 permitted hunters, and the participation rates vary widely by region. Census data from 2010 finds that hunting is most popular in the East South Central region, which includes Tennessee and Kentucky, where 11 percent of the population claims to hunt. In the Pacific region, however, just 3 percent told Census takers that they hunt.

The more pronounced drop-off is in young hunters. That’s why Leith Konyndyk goes out of his way to promote hunting to teens, starting with his two sons.

Today he’s just the guide on a special youth turkey hunt, loading a shotgun for his 14 year old, Lake. The teenager has never bagged a turkey, though he already calls hunting an addiction.

“I mean, your heart is pumping real, real fast when you’re aiming, getting ready to shoot,” Lake said.

The Konyndyks live near the Tennessee-Alabama line, where barns and fencerows still dominate the landscape. But Lake says most of his friends at school don’t hunt, and more often than not, they turn their noses up at it.

“You could talk to a girl about it and she’d [be] throwing up over there. I’m talking about it, not showing you a picture of a doe I just gutted or showing you a video,” Lake said. “I did that once for 4-H. It ended terrible.”

Lake said he field-dressed a dove in front of his class. Their disgust was obvious.

The headwinds against hunting are pretty simple: An industry analysis from IBISWorld published this year says that as the country continues to urbanize, exposure to hunting becomes more limited, and more people see the activity in a negative light.

Plus, fewer people have the connections it would take to get started, like knowing someone with land.

“Maybe people don’t have the opportunity they used to have to access and hunt those pieces of property,” Leith Konyndyk said.

But there’s also a strange thing that’s happening — even as fewer Americans hunt, hunters are spending more money doing it. Expenditures for hunting equipment increased by 17 percent from 2006 to 2011 and money spent on trips went up by 40 percent, according to the latest Census data.

“You’ve got all this stuff and people are bombarded with what boots to wear and what camo to wear and what scent to use,” Leith said. “When I was a kid, I remember wearing multiple pairs of socks, and you wore your boots. When they started not fitting, [you] just took off a pair of socks.”

Judging from his collection of gadgets, Leith has become a bit of a gear hog at this point too. But he says he tries to steer beginners toward what he sees as the character-building aspects of the sport.

“Part of taking kids hunting is there’s a reward to patience,” he said.

Leith and his son Lake are squatting against trees about 20 feet apart. They’re trying to blend in as a big red-headed turkey follows a group of hens strutting through a swampy area.

A gobbler is in range. Leith gives the signal and Lake takes aim, with one shot.

He hit the target.

Leith lets out a celebratory “woo!”

“Congratulations, man, on your first bird,” he tells his son. “Well, go get him. I can’t even get up. My heart is racing.”

A few minutes later, father and son take a photo together, posing with Lake’s first kill: a portrait that many people treasure but fewer have these days.

This article was first published by Nashville Public Radio.