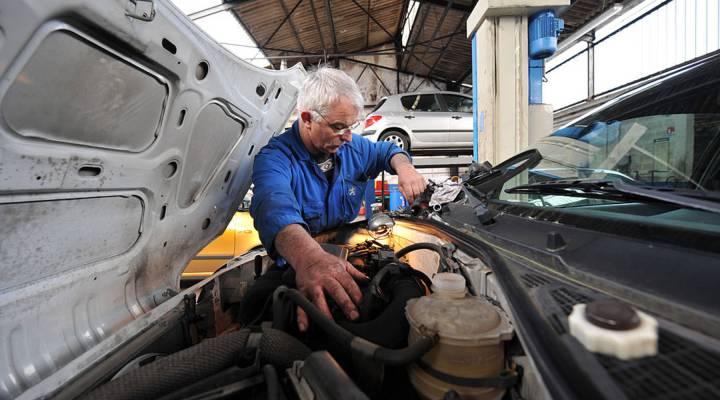 COPY
Marketplace's Chris Farrell discusses a new report on how policymakers and businesses can maximize the economic benefits of an older workforce. Mychele Daniau/AFP/Getty Images

Marketplace's Chris Farrell discusses a new report on how policymakers and businesses can maximize the economic benefits of an older workforce. Mychele Daniau/AFP/Getty Images
Listen Now

As the U.S. population ages, some older Americans need to stay in the workforce longer.

“People are living longer and as a result they have to finance a longer period of retirement years,” said Lori Trawinski, with the AARP Public Policy Institute.

The 80 and over demographic is the fastest-growing group in the country, according to the AARP, with those that are 100 years old or older following closely behind. “So as a result of this, employers are going to face shortages of knowledge and skills,” Trawinski said.

At the same time, the rising share of retired people in the U.S. can also be a damper on economic growth. “So it will be very important for employers in this country to find ways to retain the older workforce,” Trawinski said.

One way that employers can keep older workers is through  flexible retirement. “An individual who may be close to retirement age chooses to stay with an organization in some capacity in a different work arrangement or schedule,” explained Lenny Sanicola, with World at Work, an HR professional association. “It offers employers the opportunity to retain people that have a lot of historical knowledge.”

Vivian Low, who is 67 years old, is one of the flexibly retired. The California-based nurse wanted to spend more time with her grandchildren, but didn’t want to stop working completely.

“I’ve always wanted to be a nurse,” she said. “I love being able to be of service to patients.”

So when it finally came time to retire, Low didn’t — at least not all the way.  She kept one foot in the door at the hospital. “It depends on the tasks that need to get done,” she explained. “I could have a week when I’m here as little as four hours to eight hours. And then I could have a week where I’m here 25 hours.”

Low said she sees the benefit of that every day. “Sometimes I’ll get a call with you know ‘we can’t remember why we decided to do x y or z’ and I can say ‘well you know we tried this ten years ago and here’s what went well and here’s what didn’t,’” she said.

Right now the arrangement that Low has at her hospital is not common. A study from the Government Accountability Office estimates that 5 percent of employers offer “phased retirement,” a form of flexible retirement where a person’s departure from the job is phased in over a period of time. Only about one-third of employers at least occasionally offer some form of flexible retirement to certain employees, according to World At Work.

But experts predict flexible retirement will become more common in the U.S.. “We have a population that is aging rapidly, so we’re going to have many more older people than we have in the past,” said Trawinski. Birth rates meanwhile, are at a record low.

Sanicola says the idea is not without its challenges for some companies. “Sometimes you have a stacking effect where older folks are not exiting and new employees can’t move into new positions,” he said. “But it depends on the needs of the company.”

Knowledge and skills possessed by older American are also sometimes overlooked, said Trawinski. But America is getting older. Inevitably, so must its workforce.