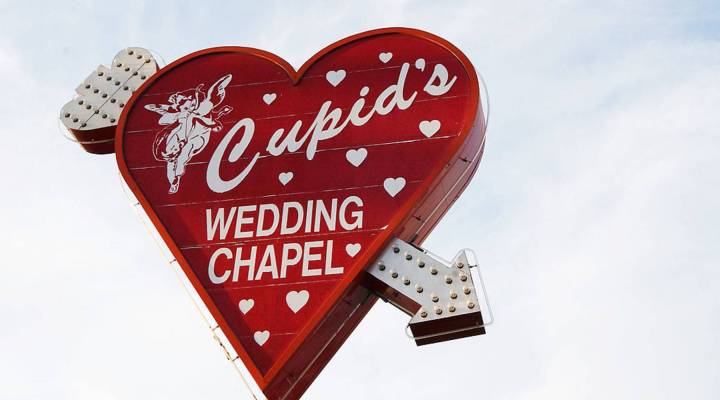 Wedding bells are not tolling as loudly nowadays as they used to. As marriage rates in the U.S. have fallen, so has the business of weddings. Even Las Vegas — the destination for spontaneous weddings — has taken a hit.

The trend has been almost 60 years in the making, according to the Pew Research Center. The number of Americans 18 or older who are married has been declining since 1960, when 72 percent of adults were married. That percentage has dropped down steadily over the years to 50 percent by 2014. But even as marriage rates have declined, the amount brides and grooms — and their families — spend on individual weddings has increased.

Let’s do the number on marriage, weddings and joint finances:

Following a decade of declining marriage rates, Las Vegas decided to hike their marriage license fee in order to generate more revenue for advertizing weddings. In 2015, the fee went from $60 to $77. The $17 increase consisted of a $14 marketing surcharge and $3 technology fee. The increase was supposed to bring in $1.1 million a year for advertising.

Last year — in 2016 — Las Vegas created its very own Wedding Chamber of Commerce, but still, the numbers have yet to climb.

“Rome wasn’t built in a day,” Aimee Stephens, the director of marketing for Vegas Weddings, told KTNV, a local TV station, earlier this month. “They’re marketing it, and putting forth the extra effort, but I think it’s going to take a little more time.”

Elvis in a chapel is not the only inexpensive alternative

Businesses are rushing to provide cheaper alternatives to the traditional wedding for cost conscious couples. For the quirky couple who loves their cheesy tacos, there is the  Las Vegas flagship Taco Bell store wedding – just $600! Taco Bell is set to announce more details come August 7.

If you are more of a pizza person, then a wedding at &pizza in Washington, D.C. might be more your thing. To celebrate this year’s Pi day, the pizzeria offered a free 60 minutes of cake, booze and pizza to couples willing to tie the knot on its premises. According to the New York Times, about 60 couples applied and seven ended up having their wedding there.

Last year, a bride in England fulfilled her childhood dream when she married her husband at a local McDonald’s. The happy couple and their 30 guests enjoyed Big Macs with fries after the ceremony.

Last year, the cost of the average wedding reached an all-time high at $35,329, even as the average number of guests dropped to 141, according to The Knot annual survey of 13,000 grooms and brides. At the same time, an increasing number of people are opting out of throwing an expensive wedding to celebrate their conscious coupling.

There are other financial reasons besides just the high costs of weddings that come up when we discuss the decline in marriage rates. One of the reasons is that young people today have a lot more debt than the generations before them. On average, 2016 graduates left college with $37,000 in student loan debt.

Marriage rates are especially low among lower income groups, according to Bradford Wilcox, a visiting scholar at the American Enterprise Institute.

“So, not only are they earning less, comparatively speaking, but they’re also less likely to pool their incomes and to build common assets as married families,” he said. On average, the data show that married men earn about $16,000 more a year than their single peers.

Shannon Moore guards a collection of wedding dresses during the ‘Running of the Brides’ event at Filene’s Basement April 29, 2011 in Washington, DC. Filene’s held this year’s sale event where they display upwards of 1,700 wedding dresses on the same day as the British royal wedding.

Back in 2013, Gallup found that married Americans — especially those in their younger twenties — tended to spend more money if they were married.

“Americans who have never married spend significantly less, particularly for those younger than 50, suggesting that if the marriage rate increases, overall spending in the U.S. may increase and benefit the U.S. economy,” Frank Newport and Joy Wilke of Gallup wrote at the time. “Married Americans report a daily spending average of $102, followed by $98 among those who are living in domestic partnerships, $74 by divorced Americans, $67 by those who are single and never married, and $62 by those who are widowed.”

Married couples that were 18 to 24 years old tended to spend on average $105 a day, whereas single people that age spent just $54.

Some spend it in secret

Pooling money is great, but what if your significant other has a secret account? One in twenty people have a credit card or an account that they keep secret from their partner, according to AARP. Out of the 1,000 people surveyed at the beginning of this year, one in four spent at least $500 without telling their partner. Baby boomers were twice as likely as millennials to spend money without checking with their partner.

Not always happily ever after

Money is one of the leading sources of tension in relationships and marriages. What’s more, disagreements over money have been proven to be an accurate predictors for divorce.

If you’ve tied the knot but aren’t sure it it will last, you could invest in something called divorce insurance to protect your money. Back in 2011, Marketplace interviewed John Logan, CEO of WedLock Divorce Insurance. At the time, to protect $1,250, you’d have to pay $15.99 per month.

Logan came up with the idea after going through a divorce himself.

“What happened to me is about 10 years ago, I went through a world-class, ugly divorce,” he told us. “And after the dust settled, I took stock of where I was. And I was next to broke, I was about to lose my home. And I said to myself, ‘Well, gee whiz, I can’t be the only person that this has ever happened to.’”