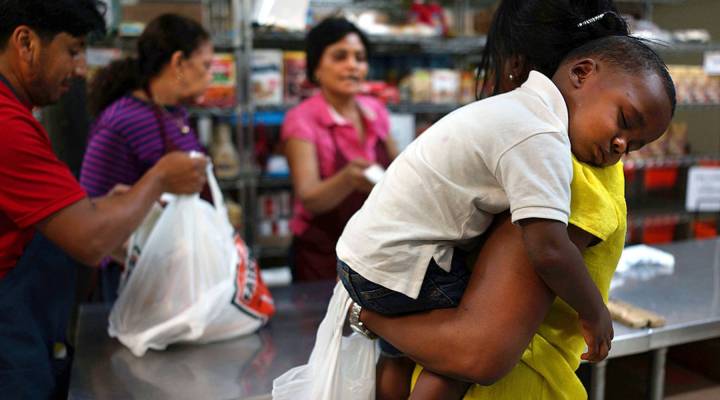 COPY
A mother and her child at the West Side Campaign Against Hunger food bank in New York City.  Spencer Platt/Getty Images

A mother and her child at the West Side Campaign Against Hunger food bank in New York City.  Spencer Platt/Getty Images
Listen Now

Gross domestic product goes up, but it doesn’t necessarily drag our standards of living up with it. Every year, the nonprofit advocacy group Prosperity Now issues a scorecard on the prosperity of Americans by looking at factors like opportunities to get higher-paying jobs and the ability to save and to build wealth. While the latest survey shows a decrease in poverty, it found that one in four jobs in America are still low-wage, and that the American dream is still out of reach for many.

Andrea Levere, president of Prosperity Now, joined us to talk about the struggles Americans have with saving money and what her nonprofit is doing to help.

David Brancaccio: The U.S. government’s main measure of economic growth, gross domestic product, goes up a lot, goes up a little each quarter. Many Americans, though, are not feeling it. You see that in your data?

Andrea Levere: Yes. And the power of the scorecard is that it looks beneath the national numbers into specifics. So while we see positive trends in unemployment and the poverty rate, we also see other trends such as the fact that today one in five households experience real changes in the cash flow that comes into their household from month to month. And 44 percent of these households were unable to set aside any money for emergencies.

Brancaccio: You know, the economic experts come on this show — I wouldn’t said on a daily basis, but frequently — point out that you should have at least six months savings in case something bad happens. Most people don’t have anything close to that.

Levere: One of the most powerful metrics that we’ve developed is a measure called liquid asset poverty, and that measure says, “Do you have enough in savings to be able to exist at the poverty level for just three months if your main source of income is disrupted?” Thirty-seven percent of American households are in liquid asset poverty, and that rises to 57 percent of African-American households and 61 percent of Latino households. And that matters both for how these households could manage, but also for the overall economy because that level of financial insecurity, we believe, links directly to limitations on growth.

Brancaccio: So you have some of these broad and more specific policy recommendations — raising the minimum wage, the Earned Income Tax Credit even at the state level. But what’s this about offering a prize for savings?

Levere: One of the areas we do a lot of work in is children’s savings, because we believe that starting a child with a savings account can help break the intergenerational transfer of poverty. And so we have several programs around the country that engage families and households in building these accounts by offering prizes you save in an account. And it makes you eligible for a special prize. One of the great rules of behavioral science we’ve learned is people hate losing more than they like to get something, and so we can keep them engaged in this process.