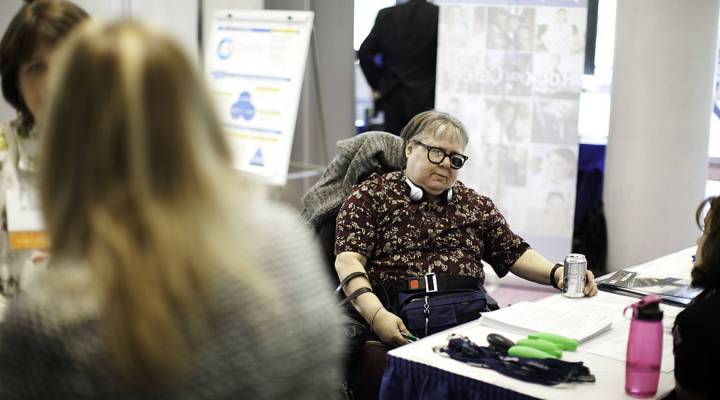 If you’re a person with a disability, you’re much likelier to have a harder time finding employment.

According to the Department of Labor, in 2016, the unemployment rate for the general population was 4.6 percent. But for people with disabilities? It was stuck around 10.5 percent. That’s about where it was in 2015, too, meaning that despite the ebb and flow of the labor market, employment prospects didn’t change too much for people with disabilities.

“I don’t really see the employment rate for people with a significant disability going up. It just seems to have plateaued,” said Greg Thompson, the executive director of the Personal Assistance Services Council in Los Angeles. “And unfortunately there’s a lot of disincentive for somebody with a significant disability to return to work because they lose all their benefits.”

Thompson was injured in a water skiing accident in 1977, when he became quadriplegic. After his injury, he went through rehabilitation at Rancho Los Amigos in Los Angeles.

While there, Thompson learned to live with his injury. “Rancho basically was a lifesaver,” he said.

Thompson, who is also a licensed clinical social worker, decided to co-found a program at Rancho Los Amigos that would help people with disabilities meet long-term goals — like find jobs.

“Employment seems to be the key for everything,” said Thompson. “Because it’s very difficult for a person with disability to live on the current Social Security disability checks. It’s very hard to find an accessible house that’s affordable. So when you’re not working, it’s extremely challenging.”

Carlos Benavides also uses a wheelchair. Like Thompson, Benavides became quadriplegic after an injury. Before that, he worked as a graphic designer at a Fortune 500 company.

“I probably won’t be able to go back to that type of employment due to the fact of being in a wheelchair,” said Benavides. “There are so many deadlines in graphic design and graphics that I cannot compete in that format. I’m not able to load paper. I’m not able to reach over my head.  My range of motion is very limited.”

Instead, Benavides became a full-time instructor and disability advocate. He sees his job as helping others understand disability, and not see it as an aberration.

Unlike Benavides, Hector Ochoa wasn’t injured later in life. He was born with osteogenesis imperfecta, also known as brittle bone disease.  Ochoa, who is 33 years old, has sustained over 100 bone fractures to date.

After graduating from high school, Ochoa tried to enter the workforce.

“I was more interested in looking for a job rather than continuing with my education,” he said. “And I quickly learned that employment or finding a job was not that easy, being a person with a disability.”

Ochoa graduated from high school in 2001. He wasn’t able to find a steady job until 2010. Now, he works for an independent living center in Los Angeles. He enjoys his job, and feels secure in it. Still, he thinks that his situation is fortunate; there are too many other people living with disabilities who are really struggling to find work.

“I think individuals who are qualified and have the education behind them and are still struggling to find employment, that is what baffles me,” said Ochoa. “And this is just my personal opinion, that the disability is certainly the reason why the individual is not getting the job. Because if they’ve studied, they have their college degree and they’ve done everything necessary, and they bring the skill set and knowledge to that particular position, and they meet the minimum requirements of the job and still don’t get that job, what else is left to think?”

Benavides acknowledges that the way someone with a disability works may not look like the way someone without one works. According to Benavides, it’s hard for someone who uses a wheelchair to sit for eight hours straight, as you might have to do in an office job.

Benavides likes to say there are only two types of people in the world: people with disabilities, and people who are temporarily able-bodied.

“Either by age, by an accident, whatever, they’re going to eventually end up using some type of disability apparatus,” said Benavides. “Whether it be a wheelchair, crutches, cane.”

“And my job and my goal… is to make sure that by the time that person gets there, that I’ve already paved the road to make it easier for them so they don’t have to go through all the different trials, and different situations, and different scenarios that we had to get to.”