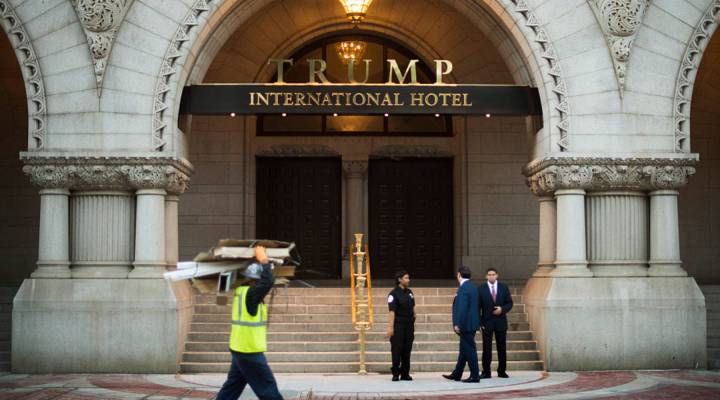 COPY
A construction worker carries away trash as security staff patrol outside the Trump International Hotel in Washington, D.C. during the hotel's opening in 2016. JIM WATSON/AFP/Getty Images

A construction worker carries away trash as security staff patrol outside the Trump International Hotel in Washington, D.C. during the hotel's opening in 2016. JIM WATSON/AFP/Getty Images
Listen Now

When it comes to President Trump’s business dealings, there are still a lot of unanswered questions, including whether the president is breaking the law — and violating something known as the emoluments clause — by receiving payments from foreign governments. Not directly, but by way of their business at the Trump International Hotel in Washington, D.C., which opened last year on the historic site of the Old Post Office and is still operated by Trump’s company. And that’s not the only headache the flashy new hotel is causing. Since Trump was elected, the hotel has become a magnet for the powerful and the curious. And that’s led to complaints from others in the business that the president’s place has put them at a competitive disadvantage.

The hotel, just four blocks from the White House, is pure Trump. It’s grand and gaudy with a nine-story atrium. Gold, marble and crystal are everywhere. Lawrence Bruckner, a Trump supporter from Thompson, Illinois, took it all in over lunch recently.

“There were some wonderful people there and the chandeliers, and we had a senator sitting beside us there,” he said. Like lots of people, Bruckner didn’t really come for the food or expensive liquor (you can get a crystal spoonful of Hungarian wine for $140). He was drawn to the hotel by the celebrity of Trump. And that’s a problem for the attorneys general of Maryland and the District of Columbia. They’ve filed suit against the president.

“The president’s hotel, by virtue of it being the president’s business, provides an unfair playing field to his business over that of other competing businesses,” said Karl Racine, the attorney general for the district.

For example, Racine said, the Embassy of Kuwait moved an event from the Four Seasons hotel to the Trump hotel. And he said the Trump hotel may be taking business away from other hotels and city-owned facilities, including the convention center.

In spite of the Trump hotel’s celebrity, “It’s a pretty modestly sized hotel in a very large hotel market,” said Heywood Sanders at the University of Texas at San Antonio, who follows the hotel and convention business. “The Trump hotel has 263 rooms in a city hotel market that has over 31,000 hotel rooms available,” Sanders said.

And it’s a market that just happens to be one of the strongest in the country right now. People flocked to Washington, D.C. in the first half of this year, starting with Trump’s inauguration and the protests that followed. The average room rate for D.C.’s downtown core was $242 a night last year, Sanders said. Average room rates for this year aren’t available yet.

He said the market is strong enough that there are 16 more hotels in the pipeline. That means everybody who’s already in the game is doing what they can to stand out in the crowd.

“They’re going to employ every single option to remain competitive. And sometimes that does not mean reducing your rate and other times it might,” Ferguson said.

That rate can easily top $600 a night at luxury hotels like the Four Seasons, the Willard InterContinental and the Trump hotel.

No one’s complaining about losing customers to the Trump hotel — at least publicly. Business is one thing. Dissing the president is something else. Washington Attorney General Racine said legally, it doesn’t matter how much of an advantage the Trump hotel might have over a competitor.

“So long as it’s adversely impacted in a manner that is unfair, that makes the level playing field not fair and just, that’s enough,” he said.

Even though sometimes the Trump name is a disadvantage.

Back at the Trump Hotel, Mike Olson, a health care executive from Eau Claire, Wisconsin, said he went to a business dinner here recently.

Olson said, as far as staying at the hotel? Not likely.

“I hope Trump does very well,” he said. “I hope he’s a successful president. But I just have some trouble at this point supporting his businesses.”

At this point, that’s not a problem. He’s got options. Thirty-one thousand of them. 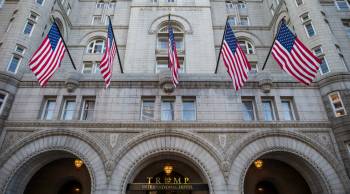 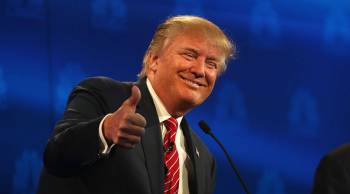