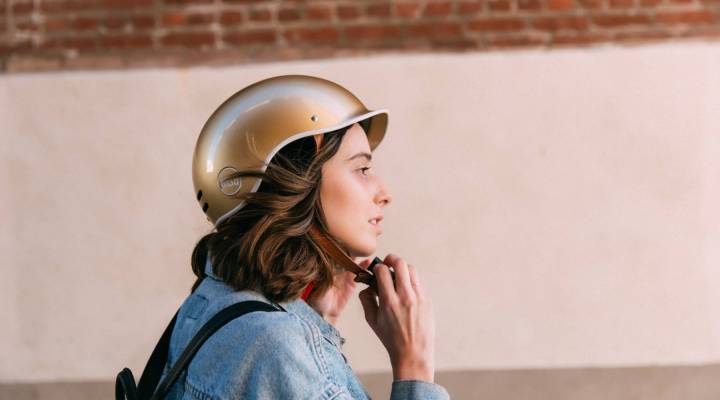 In the middle of downtown Los Angeles’ bustling Arts District, you’ll find the headquarters of Thousand occupying one of the few work/live lofts left in the area.

It’s a company that makes bicycle helmets, but think less duck-billed head gear and more Steve McQueen in the 1960s.

Gloria Hwang, the co-founder and CEO of Thousand, thinks designing a bike helmet people will eagerly wear is the key to keeping more people safe on the road. Marketplace’s Adriene Hill spoke with Hwang about the inspiration for her company and why it’s not as easy as just designing a better-looking helmet. Below is an edited transcript of their conversation.

Gloria Hwang: My story is I’ve been a longtime biker in Los Angeles and I never wore a bike helmet. And if I’m honest, it’s just because I just thought they looked kind of dorky so… it’s not a good reason.

Hwang: But it was my reason. And then a friend of mine passed away from a really bad accident. It was a head-first injury, in New York City; he wasn’t wearing a bike helmet. And for me I was just… afterwards, it was just that feeling of: I need to start wearing a bike helmet to be responsible to myself, to be responsible to people around me. And I went on the market to find something I really liked, and, you know, could kind of represent. And I think I found things I thought were kind of passable, and I really thought to myself “Hey, you know if you make a bike helmet people actually want to wear, I think you can solve a public health crisis. You can prevent a lot of injuries and fatalities every year.” And beyond that, I feel like you can really encourage cycling within cities because I thought people were like me. Like, the main reason they didn’t want to bike was because they don’t want to feel unsafe. So if you could give people way to feel safe then maybe they’d bike more.

Hill: Did you have any experience with bike helmets or designing?

Hwang: Not at all.

Hill: Okay, you’re like, I just want to make a cool-looking bike helmet?

Hwang: Yeah. You know what, my background was in philanthropy. I was actually former Toms. So I was in the “Giving Department” there. And my job was trying to help things have social impact that the company was doing. So my background is trying to find new ways to do good in the world. So the mission, that was in my background. But design was not. Again, design was something I just had to learn to make this happen.

Hill: And describe your helmet. How did you make — what’s it look like, for folks who can’t see.

Hwang: Going back to the whole like equestrian, vintage, moto thing, I really just try to put those two together. For me it was thinking, the coolest thing for me to find would be like a 60s or 70s scooter helmet in someone’s basement. And can we take that concept and make it for today?

Marketplace’s Adriene Hill tries on a Thousand helmet at their headquarters in Los Angeles.

Hill: So you have this idea for design. You want it to look like this sort of vintage scooter helmet… about like keeping it safe. Like I can’t just look good; it actually has to do its job. How did you do that?

Hwang: The helmet development process takes a year and a half. You have to pass CPSC testing in the U.S. which is, like, 20 different tests. We also sell a lot in Europe. So we have CE testing, which is an additional 20 other tests. So that whole testing process takes like four months. And the really crazy thing about bike helmets is you have to build everything to production level before you can test it. So that means you have to invest all of the money in design, in all the molds. You have to build the whole thing of what you’re going to sell to the public, and before you can, you have to test it. And if that fails, you’ve got to go to the beginning again.

Hill: So how much does it cost to develop a new helmet?

Hill: Where did you guys come up with that?

Hwang: While I was at Toms, I had this idea and I was like, okay, I’m going to start working nights and weekends on it. And I put together a Kickstarter concept. At the time, I was trying to raise twenty grand. By the time that campaign closed, we had close to a quarter of a million dollars. I actually thought Kickstarter was broken! Because pledges were coming in but they were all from people I didn’t know. So I just thought I was a system glitch.

Hill: And are most of your sales coming direct to your website? Or coming through bike shops?

Hwang: It’s a little bit of both. So a lot of the shops that we sell to aren’t bike shops because we felt like the customer experience in a bike shop… and probably our customer isn’t going to bike shops a lot. Our customer rides a couple of times a month. They’re biking to work. They’re not like bike aficionados. We kind of fall into a more progressive area because we’re thinking more about how do people behave nowadays than they did maybe 10 years ago or 20 years ago.

Hill: How often do you think back to your friend who passed, that sort of started this idea?

Hwang: I would say really often. He actually hired me at Toms. He hired me as an intern and it was one of those things where when you’re like young, in your 20s, you don’t really believe in yourself a lot. He was the first, kind of, grownup that made me think I could and should believe in myself. So, I think it’s kind of … sorry …. again, creating something for him, it feels kind of full circle in a lot of ways. Because you just get the letters and you’re like, this is kind of worth it, you know? Just, like, even one life saved, one hospital trip avoided. Worth it.

Marketplace’s Adriene Hill and Gloria Hwang of Thousand discuss redesigning the bike helmet on the roof of the company’s headquarters in Los Angeles.