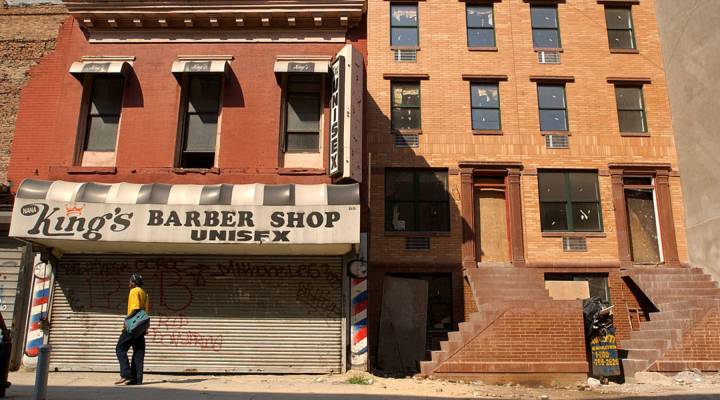 What’s in a name, you ask? Well, kind of everything, at least if you’re asking someone from Harlem, in New York. Backlash has been swift and fierce against what was supposed to be a simple, catchy acronym: SoHa, short for South Harlem. That is what some realtors in the city have taken to calling part of the neighborhood.

Some residents have said this kind of backdoor re-branding smacks of gentrification. But the practice of creative neighborhood renaming is actually quite common in real estate, and in some cases can speed up economic development.

Ron Smothers owns a Denny’s restaurant at the corner of Crenshaw and Coliseum in South Los Angeles. Smothers, a former Army officer, has owned restaurants here since the late 1970s, back when the area was still known as South Central.

“South Central, whenever anyone says South Central, you knew what they were talking about. It was not a good place,” recalls Smothers. During the 1980s and 1990s, Smothers said South Central had become synonymous with riots, gangs and crime.

In an effort to get away from its past reputation, in 2003 the city council voted to rename the 16-square-mile district, dubbing it South Los Angeles.

Since then demand for affordable property has created all kinds of new development.

“I think it was done with the realization that it would only help,” said Smothers, “because South Central had become an ugly word. And, it hasn’t hurt. If anything I’d have to say it has helped contribute to the progress we’re seeing.”

Ron Smothers owns a Denny’s restaurant at the corner of Crenshaw and Coliseum in South Los Angeles.

On the other side of the country, “what can it hurt?” wasn’t the attitude some New Yorkers felt when references to SoHa started turning up on businesses and awnings. Unlike South Central’s name change, renaming the neighborhood SoHa was not a city council decision.

“I mean, I’m a real estate broker and I understand it,” said Danni Tyson, an agent with Halstead. “It’s to make the place seem hip, different. You know, it’s not Harlem, it’s SoHa, it’s really cool.”

Tyson was the first to notice when Keller Williams, a national real estate brokerage, began using the term SoHa, a name which many locals have come to view as a slap in the face.

“To come now, yesterday, and rename our community. Where do they get off at? It is disrespectful to us,” said Cordell Cleare, a fourth-generation Harlem resident, who spoke at a protest last month.

Critics claim these re-branding campaigns are a kind of ploy to raise rents and push out current residents. State senator Brian Benjamin introduced legislation barring the renaming of neighborhoods without community input.

“You know, we’re happy to have newcomers, but not at the expense of those who have been here before,” Benjamin said. Especially in a place as culturally significant as Harlem.

“You want to preserve that,” he said. “You don’t want where Malcolm X used to give some of his most famous speeches and rallies on 116th Street, to be re-named SoHa, you want it to be Harlem.”

Benjamin notes that Harlem, with its plentiful supply of brownstone homes, is seeing its property values rise fast enough, even without re-branding. After significant backlash, Keller-Williams ultimately stopped using the SoHa name.

In other cities, however, a new name can mean a new neighborhood. Take for instance, NoMa in Washington, D.C.

“It’s the area north of Massachusetts Avenue, that’s what it stands for,” said Robin-Eve Jasper, the President of the NoMa Business Improvement District.  Just 5 years ago, the area was an industrial no-man’s land.

“There was almost nothing here, but a few derelict warehouses, mostly not in use, and just vacant lots,” she said.

Five years and billions of dollars later, NoMa is now home to 7,000 people and a booming market for apartments and office space. While the name does sounds a bit trendy, Jasper likes it better than the original idea, Capitol Hill North.

“It was authentic to where the neighborhood was,” said Jasper, “there wasn’t something that was being obliterated in order to pick up that identity and was better than fake Capitol Hill.”

Jasper concedes that the success of NoMa has pushed up prices in surrounding neighborhoods, something the city is trying to address through mixed-income zoning.

But whether you’re talking NoMa, SoHa or some other acronym, the renaming trend isn’t slowing down, though some names will stick, and others won’t.