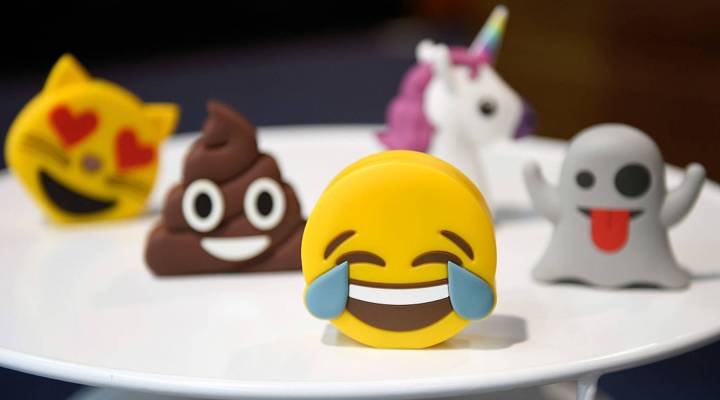 Batteries designed as emojis are displayed at the Philo booth at CES 2017. David Becker/Getty Images

Batteries designed as emojis are displayed at the Philo booth at CES 2017. David Becker/Getty Images

Today is the fourth world emoji day. It was first celebrated on July 17, 2014 by Jeremy Burge, the founder of Emojipedia. Why July 17? Because that’s the date on your calendar emoji.

The little cartoon symbols have come a long way from when they first appeared on phone keyboards. These days they show up everywhere, even at work.

According to the workplace messenger app Slack, the above emojis are just a few on my list of  “frequently used.” Yup, I emoji at work. I use emojis to let my co-workers know that I have seen their message, that I have done something they have asked of me, that I agree with what they have just said, and to celebrate or commiserate when need be.

I am not alone. According to a 2014 survey by mobile messaging app Cotap, 76 percent of American workers have used emoji in a professional setting. A majority of them — 64 percent — used happy face emoji. That should come as no surprise as the main reason people use emojis at work is to come across as more personable and soften the tone of their digital communications.

Even senior management seems to be coming over to the pro-emoji side. Last year, OfficeTeam surveyed 300 senior managers and found that 61 percent thought it was ok to use emojis in work communications.

“Anecdotally, it does seem that the general usage and acceptance of emojis is growing as the years go by. Many people have become accustomed to communicating with emojis in their personal lives, so it’s not surprising that this might spill into their work lives too,” explained Brandi Britton, district president of OfficeTeam.

According to another survey by OfficeTeam, this time of more than 350 workers, 19 percent used emojis all the time because they helped them “show the feelings behind the message.” Another 22 percent used them just occasionally with co-workers, but not in formal communications with their boss.

“As companies adopt different technologies for workplace communications, like instant messaging tools, it can be easier and more common for employees to use emojis with one another. But in some companies or types of industries, emojis continue to be no-nos, especially in more formal environments or those with frequent client communications,” warned Britton. “It may be tempting to go wild with the winking face or stuck-out tongue emojis at work, but consider the corporate culture, audience and topic before sending.”

Since it is emoji day, and so many people have started to incorporate them into their work communications, we figured it was a good time to do the numbers on emojis:

Who decides what emojis end up on your phone? The Unicode Consortium.

Since we can’t have people running around creating emojis left and right, the job has fallen to the Unicode Consortium. Emojis are just a tiny fraction of what the Unicode Consortium oversees. The consortium’s main purpose is to standardize scripts for all characters used in modern softwares and technology — ensuring that software applications can work in any language in the world. A consortium membership buys companies or individuals access to the Unicode email lists. Memberships come at different levels — full membership for companies like Apple, Slack or Twitter is $18,000 per year. Nonprofit companies can get a membership for $12,000. Among other cheaper memberships is the $75 individual membership and $35 student membership. The most expensive memberships come with more access to information, committee meetings and even a right to vote in some cases.

There are about a dozen people on an emoji subcommittee, Mark Davis, president and co-founder of the Unicode Consortium, told the Los Angeles Times last year. The subcommittee meets twice a week for 45 minutes to consider some of the 100 or so emoji proposals that are sent in throughout the year.

According to the consortium’s website, there is a total of 2,623 emojis.

More emojis are coming later this year. To mark world emoji day, Apple’s Tim Cook tweeted a preview of some of the new emojis. Among them are a woman with a headscarf, a man with a beard, a breastfeeding woman, a zombie and a mind blown emoji. There will also be new animal emojis such as zebra and a T-rex.

Of course, emojis have not been without controversy.

In May 2016, Google pointed out that while women are more likely to be frequent emoji users, there were fewer female professional emojis for them to use. As a result, the company sent the consortium a proposal to suggest adding 13 professional female emojis — including a female farmer, scientist, mechanic, doctor, nurse, factory worker and a businesswoman.

“For millions of people around the world, emoji are an important means of communication — and a strong representation of culture,” Google wrote in its proposal. “Yet the roles of people in the workplace cannot be communicated with emoji. This is especially true for women.”

With growing popularity, it was only a matter of time before we got a movie about emojis. When this reporter informed her co-workers of emoji world day, one asked: “Is this a made-up holiday to promote ‘The Emoji Movie?’” Strangely enough, the marketing powers that be at Sony have decided to release the movie on July 28 rather than on emoji day. ¯_(ツ)_/¯

Before there was “The Emoji Movie,” there were Kimojis — the Kim Kardashian emojis. The Kimoji app was first rolled out in December 2015 with a price tag of $1.99. According to Quartz, the app was on track to make more than $2.8 million worldwide in 2016. Other stars to make similar emoji — or stickers as they are sometimes called — apps include Stephen Curry and Justin Bieber. At one point, even Charlie Sheen got in on the game, rolling out a line of his own personalized Sheenojis.

We leave you with a bitmoji of our very own Kai Ryssdal.