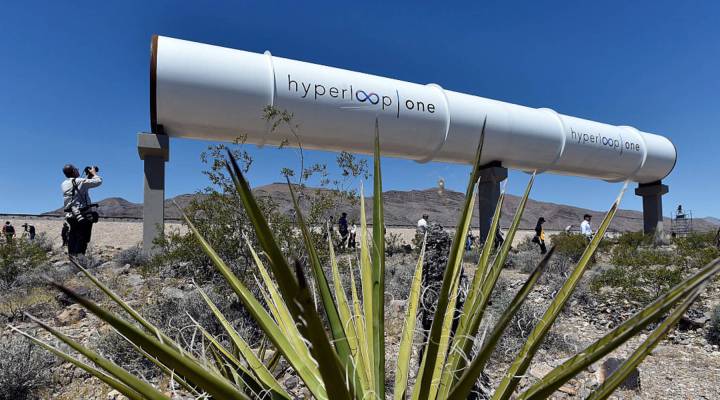 COPY
Hyperloop tubes are displayed during the first test of the propulsion system at the Hyperloop One Test and Safety site in 2016 in North Las Vegas. David Becker/Getty Images

Hyperloop tubes are displayed during the first test of the propulsion system at the Hyperloop One Test and Safety site in 2016 in North Las Vegas. David Becker/Getty Images
Listen Now

The world is one step closer to ultra-fast travel. Hyperloop One completed the first full-systems Hyperloop test, sending a vehicle down a vacuum track at 70 miles per hour. It happened at the company’s test track in the Nevada desert on May 12, the company announced on Tuesday. Marketplace Tech’s Ben Johnson talked with Hyperloop One co-founders Josh Giegel and Shervin Pishevar about what’s next for the technology and how it could be used. The following is an edited transcript of their conversation.

Ben Johnson: The company just announced what you’re calling the first new mode of transportation in over 100 years. What happened?

Josh Giegel: Over the last 10 months in the desert, we’ve had a group of about 200 engineers, technicians and fabricators building a full-scale tube. We had our first Kitty Hawk moment like the first time the Wright brothers had their plane fly. And now we’re getting ready to move into the next phase of testing, which will take us up to about 250 miles an hour.

Johnson: What is the eventual consumer-facing goal of the company, and when are you going to arrive at that destination, so to speak?

Shervin Pishevar: The dual vision is to do cargo and people so you can essentially turn cities into metro stops, change the definition of where people live and work. And on the cargo side you could have real-time efficiency in the economy, so when people order something, it could be manufactured, distributed and delivered in a 48- to 72-hour period.

Johnson: But where are you planning on putting this stuff?

Pishevar: We would love to have Hyperloop One building in the U.S. But at the same time we have to build it where there is support to do that.

Johnson: So we’re talking about …

Pishevar: We can’t comment on where we think the specific conversations are going. But if it happens in the Middle East first, I think that wouldn’t be surprising. But there’s a lot of progress in our conversations with governments around the world. So we feel pretty good about that.

Johnson: You guys have been tied up in this lawsuit. Your former CTO and co-founder and three other former employees filed a breach of fiduciary duty and misuse of corporate resources lawsuit. I understand that’s been settled. It’s hard enough for transportation companies to gain the basic trust of riders. How will you establish trust when one of the main narratives about the company is this infighting and accusations of being financially irresponsible?

Pishevar: The key is building and showing people that it works, and that’s why what we’ve announced this week is we’ve made history by actually building the first Hyperloop working full-scale in the deserts of Nevada. And our goals are to go from building to making this the fastest, cheapest, safest form of transportation in the world.

Johnson: So essentially you’re saying the proof will be in the pudding for you guys.