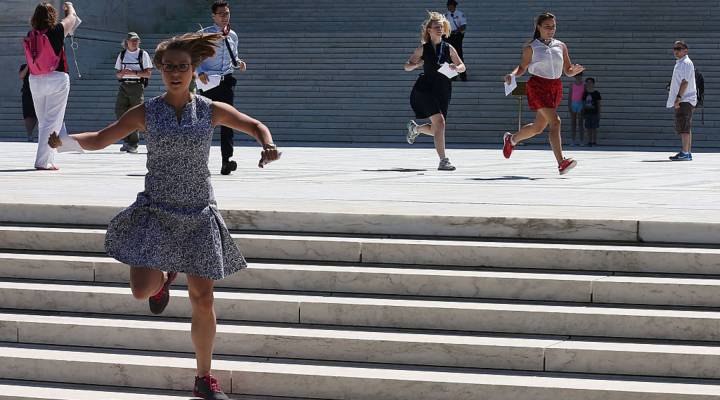 COPY
Interns run with a court decision to reporters stationed outside of the U.S. Supreme Court June 29, 2015 in Washington, DC. Mark Wilson/Getty Images
Brought to You By

On a recent hot summer morning 20-year-old Richard Van Vliet was working the soil at the Oregon Food Bank’s vegetable garden on the outskirts of Portland. “We’ve done a little bit of planting,” he said, taking a pause from digging a trench between the crop rows, “so we’ve got everything from tomatoes to potatoes to strawberries.”

Van Vliet, who is a student at Duke University in North Carolina, is working for the Food Bank as a summer intern along with fellow Duke student Tracey Ding. The nonprofit doesn’t pay them for their work — which includes duties on the farm, as well as coordinating volunteers and administrative work. Duke provides a $1,000 stipend and a dorm room at Portland State University.

“I decided to do this because I wanted some work experience,” said Van Vliet, “and I think it’s great that Duke gave me an opportunity to do this for free — basically, to pay for me to be able to come out here.”

Ding said an internship like this — working with a nonprofit to address a social problem like hunger — would be rare in his native China, where most summer work for students is narrowly tailored to their field of study, and typically paid. “Because our internship is working with NGOs that concentrate on serving and volunteering, I think not getting paid is kind of reasonable,” Ding said.

Richard Van Vliet and Tracey Ding are students at Duke University, spending their summer working for the Oregon Food Bank in Portland. The nonprofit doesn’t pay them, but Duke provides a $1,000 stipend.

According to Edwin Koc, research director at the National Association of Colleges and Employers (NACE), 42 percent of interns are unpaid this summer, down from 49 percent in 2011, when the organization started surveying employers about whether they pay interns.

Koc said it’s unclear whether the Great Recession led more employers — nonprofit, government or for-profit — to offer unpaid internships. “There was the assumption that in a period of economic distress employers would use cheaper labor, and increase their hiring of unpaid interns,” said Koc. “The logic of the assumption is pretty good, but there’s no evidence to really support that.”

The current system of training and acclimating young people to the work world has its antecedents in the Middle Ages, explained Andrew Wender Cohen, a labor historian at Syracuse University. Starting around the age of ten, he said, children in cities and towns could be apprenticed to Guild masters — a weaver, parchment-maker, baker, or blacksmith, for example. The apprentice’s family would typically pay the master, who would be expected to provide room and board. In some cases, apprentices were paid or provided with a set of tools at the completion of their training.

“Families couldn’t necessarily afford to feed all the members of the household, so this was a way of getting rid of children who had gotten too old to live in the house and not work,” said Cohen. The vast majority of apprentices were boys; girls were often sent out as servants, though they could also sometimes be apprenticed in specific crafts open to women.

“The families would sign what were called Terms of Indenture, in which the child owed labor to the master, and in turn was taught the mysteries of the trade,” said Cohen. “It was paternalistic, inherently coercive: You’re living in the master’s house, he has disciplinary power over you. Try and escape — they can have you carted back by the constable.”

In the industrial era, union apprenticeships provided education and on-the-job training for young people learning a trade. And in the late nineteenth century, “intern” was used to refer to medical school graduates training under the supervision of experienced doctors on hospital wards, prior to being certified and practicing medicine on their own.

Today’s summer internships are a boon for employers, said management professor Peter Cappelli, director of the Center for Human Resources at the Wharton School.

“Since the 2000s, employers have backed off employer training,” said Cappelli. “And they can be picky — they want to hire people who’ve already got work experience. How do you get it when nobody wants to hire anybody and give them work experience? You do it for free. And only kids who are reasonably well off can work for nothing. Somebody’s got to be supporting you.”

Carlos Vera of the advocacy group Pay Our Interns said that many low- and middle-income students have to support themselves and earn money for tuition in the summer. So they miss out on networking and job opportunities that wealthier students can get from unpaid internships — which are common in the nonprofit and government sectors, and also in for-profit fields like advertising, film, fashion and public relations.

“People say, ‘Interns are not here to get paid, they’re here to gain experience,’” said Vera. “That’s nice, but experience doesn’t pay the bills. Experience isn’t going to pay the rent or the suits you have to wear, the transportation or the food you have to feed yourself, while taking on this unpaid internship. And that’s a big inequity issue.”

Pay Our Interns recently issued a report on Capitol Hill internships. Vera himself did several unpaid internships in Congress and the White House during his time at American University in Washington, D.C., where he said he struggled to balance a full course load, a part-time job, and unpaid internships. He recommends negotiating if you’re offered an internship without pay: “It doesn’t hurt during the interview to say, ‘You know, I really want to take this. However I cannot financially do it.’ You might not get $12 an hour, but you might get a stipend or something.”

Cappelli points out that internships must comply with rules under the Fair Labor Standards Act. In general, unpaid internships at for-profit firms should primarily benefit the intern — through training, education, and exposure to work and the workplace. The employer shouldn’t derive significant benefit from the intern’s work. The rules governing unpaid interns at nonprofits and government agencies are different in some respects.

“A lot of colleges brag about the internships they have, but if you’re a parent, you want to think carefully,” Cappelli said. “You’re paying college tuition for your kids to work someplace for free. And that makes it about the most expensive summer job you could possibly imagine.”

Interns also aren’t supposed to displace paid full-time workers, though Cappelli said it’s hard to determine if that’s the case in many situations. “Particularly in the summer, when a lot of employers would hire summer workers, if you can get unpaid interns to do it, does that mean you’re not going to hire kids in the summer? Maybe it does.”

NACE’s Koc said for students, there are some clear advantages to doing paid versus unpaid internships in the summer, especially at for-profit companies. He said paid interns are more likely than unpaid interns to receive a job offer after their internship. And they earn $10,000-per-year more on average than former unpaid interns. 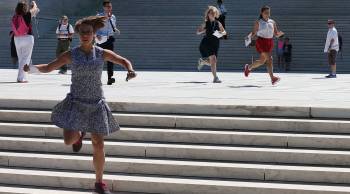