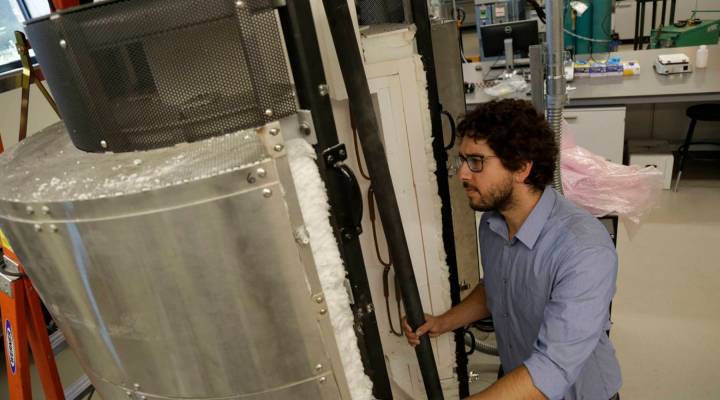 COPY
Aaron Palumbo looks into a furnace he helped develop in a lab on the University of Colorado campus in Boulder. His company, Big Blue Technologies, received a $3.6 million ARPA-E grant in 2014. Dan Boyce for Marketplace

Aaron Palumbo looks into a furnace he helped develop in a lab on the University of Colorado campus in Boulder. His company, Big Blue Technologies, received a $3.6 million ARPA-E grant in 2014. Dan Boyce for Marketplace
Listen Now

House lawmakers are preparing next year’s federal finances after hearing President Trump’s budget wishlist. A House appropriations subcommittee has just moved forward with a budget for the Department of Energy with includes deep cuts to energy innovation programs.

This isn’t quite the massive paring back proposed by the Trump Administration, but this latest House proposal does slash funding for renewable energy programs by about $1 billion. It also cuts all funding to the Advanced Research Projects Agency – Energy (ARPA-E).

Since 2009, ARPA-E has been giving government grants to energy projects with serious potential which may be too early stage to attract private investment.

“Our company wouldn’t exist, the four jobs that it created would not exist without the ARPA-E grant,” said Aaron Palumbo, co-founder of a startup called Big Blue Technologies, which is developing a much more energy efficient way to extract magnesium from raw ore. Magnesium is a light metal which goes into products ranging from aluminum cans to F-150 pickups.

“It’s important for the entire manufacturing supply chain,” Palumbo said. But breaking into the commercial mining industry is tough, Palumbo said, with big barriers to entry. The business began through a $3.6 million ARPA-E grant in 2014 and Palumbo doesn’t think it could survive without grants for a few more years yet.

That’s the promise of ARPA-E: Get projects like Palumbo’s standing on their own. More than a billion dollars in ARPA-E grants have been going to energy technologies all across the spectrum, from renewables to natural gas and LED lighting, and many more.

Axing the agency is short-sighted, said Elizabeth Noll, the legislative director of the energy and transportation program at environmental advocacy organization the Natural Resources Defense Council. “It really is going to negatively impact the United State’s ability to maintain its technological leadership,” she said.

ARPA-E has generally had broad bipartisan support. But the Trump Administration and other opponents argue it’s not the merit of the projects being funded, but the act of funding them.

“Really, it’s just not a legitimate function of the federal government,” said Nicholas Loris of the Heritage Foundation, a conservative think tank. The worldwide energy market is worth trillions of dollars and is only expected to grow, Loris pointed out.

“Any energy technology that can capture a sliver of that market will stand to be rewarded tremendously,” he said.

In other words, according to the House budget, energy companies are already making a killing, let them pay to foster innovation.

It’s not all cuts in the Department of Energy’s budget. There are big increases in other areas, like nuclear weapons infrastructure and environmental cleanup.

Correction (July 13, 2017): A previous audio version of this story misstated Elizabeth Noll’s name. The audio has been corrected.