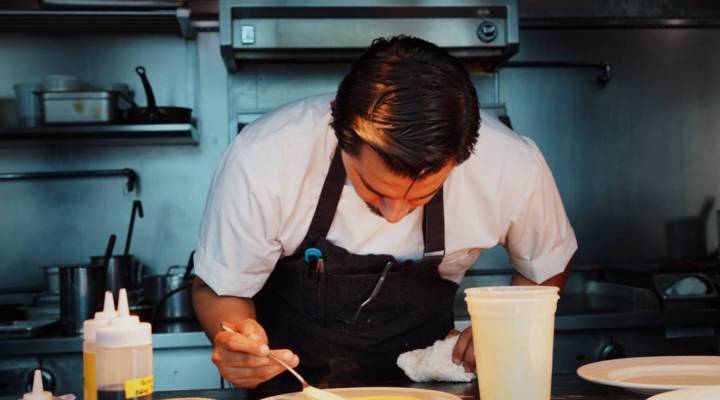 COPY
Food preparation at 71Above, in Los Angeles, CA. Liana Cabrera/Courtesy of 71Above

Food preparation at 71Above, in Los Angeles, CA. Liana Cabrera/Courtesy of 71Above
Listen Now

The June job report was, overall, pretty healthy. Wages went up by 2.5 percent, compared to a year ago.  In fact, there’s a lot happening on the wage front, especially with the minimum wage. On last week’s episode, we heard from two women living on the minimum wage: One in Los Angeles, where the minimum just went up to $12 an hour on July first, and one in New Orleans where it’s $8.25 an hour.

We also heard from a lot of listeners who shared their own thoughts on the minimum wage. On Facebook, Joe Drozal wrote: “It’s only going to get worse if we as a society continue to insist that the only jobs with merit and deserving of social standing are professional white collar jobs that require a degree. Attempts to give everybody a degree does not solve income inequality, it actually exacerbates it.”

And on our site, we heard from small business owner Mark Pearson who said, “none of my employees make anywhere close to minimum wage, not because the state forces me to pay more, but because they are the most important part of the success of my business.” For Pearson, the minimum wage should be a starting point, not the end point.

Many of your comments brought up that the minimum wage affects not only the employee, but also the employer. Restaurateur Emil Eyvazoff, who owns the restaurant 71Above in downtown Los Angeles, said that this can have big consequences in the world of fine dining, where labor can be a huge expense.

“A fine dining restaurant, by definition, has more labor in the front of house,” said Eyvazoff. “With servers, cocktail bar backs, waiters, bussers.”

And that’s not even taking into account all of the people who make the food, which can take hours, if not days, in an upscale venue. Eyvazoff has to think a lot about labor, but he also believes that his employees need to have a sustainable, livable wage. He’s just not convinced that minimum wage policies are the best way to do that.

In order to better understand the numbers behind this argument, Marketplace Weekend host Lizzie O’Leary spoke with Michael Strain, the director of policy studies at the American Enterprise Institute, who is also skeptical about minimum wage policies. An edited transcript of their conversation is included below.

Michael Strain: I think that the minimum wage often does eat into profit margins. I think that’s a reasonably good outcome in many cases. It’s the outcome that a lot of minimum wage supporters hope happens. You know especially in the context of you know really large really profitable companies.

O’Leary: Labor costs, you know, vary significantly by industry, even at the lower end of the wage spectrum. What’s to stop employers from just saying, well okay, I’m going to have a bunch of robots serve food then.

Strain: Well, I think that’s a real risk. You know, I went into McDonald’s recently, and and for the first time saw that they had some kiosks that were up in the lobby and you could type in your order. You didn’t have to talk to a cashier. You could place your order with a machine. I go into drugstores all the time, and go to an automated cashier. Not a human being. Same thing at grocery stores. Same thing in movie theaters. So you know, this is not just something that might happen. I mean, this is something that is happening. And if you think about the decision that the business has to make: You know minimum wages are going up, that means that my labor costs are going to be X and they’re going to be higher than they used to be. That makes the price of investing in machines, the relative price may go down. And so, you know, on the margin you’re going to see businesses start to make those decisions.

O’Leary: You had this line in a Q&A that I read, which I found completely fascinating, which was businesses want to make money on their workforces. And we may not like it, but that’s the reality of it. So assuming that’s true, and you know that is part of the equation for an employer, is there some magic margin that they’re shooting for, that they should be shooting for where they say, yeah, I want Lizzie to produce kind of X thing for me, and I want to make a certain amount of money on her?

Strain: I don’t know if there’s a magic margin, or even a margin that’s constant across firms, or a constant within industry, or even constant, you know, over time, across the same worker. But I do think that businesses need to make decisions about whether a worker will add value to a firm in excess of what the firm is paying the worker.

O’Leary: I want to ask you a question I asked Gary Burtless last week because I think this is very important depending on sort of how one sees the minimum wage, and where it fits into our national policy discussion. What do you think the purpose of the minimum wage is?