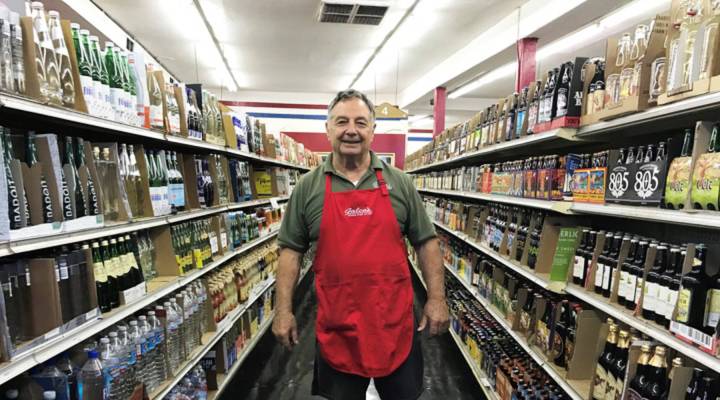 If you’re looking for a rare soda pop, an unusual flavor, or a brand that’s hard to find, Galco’s Soda Pop Stop in Los Angeles probably has it. The old-school shop became a favorite among Angelenos over the years. Galco’s has been a family-owned business since opening its doors in 1897, but it didn’t always specialize in soda. The store started it’s life as an Italian grocer in Downtown Los Angeles. Now, it’s moved to the Highland Park neighborhood, where Marketplace host Kai Ryssdal visited the shop. He talked with Galco’s owner, John Nese, about the history of the shop and the soda pop it sells. The following is an edited transcript of their conversation.

Ryssdal: How did it come to be that you’re a soda pop store?

Ryssdal: Because it was a business decision, right?

Ryssdal: Was there a moment where you knew that you had to change stuff?

Nese: Well I mean it was like, all the little stores around us are closing and it’s just a matter of time until we’re closed too. And I remember thinking about beer, and craft beers were a big thing in the ’70s and ’80s. But you have to be 21 to buy a beer. If you sell sodas, if you have the money in your hand you can go anywhere and buy a soda. So it gives me a broader audience.

Ryssdal: How do you find them though? You just pick up the phone?

Nese: Well I can give you an example, a lady called and she says, ‘I heard about you and I’m looking for a mint soda, for my Kentucky Derby party.’ And I said, ‘you know I’m sorry I don’t have any mint sodas.’ This is like 18 years ago. She says, ‘Well I know where to find them. I lived in Pittsburgh. They’re all over Pittsburgh.’ And a few weeks later I get a call from this fellow, Paul Bowser, at Natrona Bottling and he’s going, ‘Hi. There’s a lady out in your neck of the woods and she wanted to buy a couple of cases of my mint julep but I don’t sell cases I sell pallets. And she said maybe you and I can do some business. And so I’m going to send you samples.’ He sent them. Oh my goodness. It was actually made with real mint. It was absolutely delicious.

Ryssdal: You know what’s funny is that, and maybe this is false romanticism, but that’s the way business used to be. A guy called a guy and said, listen I got this thing.

Ryssdal: Show me around. Tell me what we got.

Ryssdal: Well I’m a ginger ale guy. I used to be a root beer guy.

Nese: Oh you used to be?

Ryssdal: Well, root beer is my soda of choice, but ginger ale is good too.

Nese: This is Jamaica’s Finest. The hot, hot, hot and the regular. These are made with ginger root oil.

Jamaica’s Finest, one of Galco’s many ginger ale options.

Nese: But there’s a difference. It’s made with root oil. That’s the key. Most ginger sodas today are made with extracts and flavors. And what they do is they use capsaicin, the pepper, to make them hot.

Ryssdal: Which is cheating, right? Right? I mean come on it is.

Nese: Yeah it is. It’s an inexpensive way of making it. Fifty, sixty years ago all sodas, even 7-Up, was made with lemon and lime oils and the zest. Today it’s all extracts and flavors.

Ryssdal: So there’s Dad’s Root Beer. There’s Bubble Up, what is Bubble Up? It says, ‘Kiss of lemon, kiss of lime.’

Nese: Oh yeah there’s a story for everything.

Ryssdal: You’re saying that like I should know it. I’ve never had a Bubble Up in my life.

Ryssdal: You know what’s funny is all these bottles actually, they’re not the ginormous Coke and Pepsi bottles that you see. They’re all like 12 ounce single serving things. I guess that’s intentional?

Nese: Well originally they were six and a half ounce.

Ryssdal: Oh is that right?

Nese:  Originally a bottle was a six and a half ounce bottle.

Galco’s motto is “Freedom of Choice,” Nese’s strong belief that customers have a right to choose from more than just big-business products.

Ryssdal: Oh there is actually Coca-Cola, you have Coca-Cola here.

Ryssdal: Are those are the cane sugar ones? No? Sorry. What? You’re looking at me like I have three heads, what?

Nese: Well let me say this, everybody thinks Coca-Cola coming out of Mexico is cane sugar.

Ryssdal: Yeah, is it not? What? There’s that look again! You’re the soda expert, I don’t know!

Nese: No, no. When the United States government sues the Mexican government over the right to import corn syrup into Mexico, and Mexico doesn’t use corn syrup and we win, where do you think it’s going? It’s going to the enterprise zone. That’s where it’s going. So Coca-Cola and Pepsi Cola will own the bottling plants in wherever it is down there, in the enterprise zone, they can ship them back here. It’s cheaper!

Ryssdal: You sound frustrated with the global economy.

Nese: Oh my goodness, there was a lawsuit that was supposed to take place here in Los Angeles. It never went to trial. It was settled and the results were sealed. Four months later, they came out with “made with real sugar.” What they did, the cane sugar people and the corn syrup people, in order to get federal subsidies, is they came to an agreement. They lower cased sugar and made a generic term for any kind of a sweetener so anybody could use it. It’s still corn syrup.

Ryssdal: So when it says “real sugar?”

Ryssdal: And if it says “cane sugar?”

Ryssdal: Alright. Do you have kids who are going to take this over when you’re gone?

Nese: My daughter is very successful in her chiropractic business. She’s very good. My grandchildren, oh yeah, they’re interested in working. But the problem is they’ve got to start at the bottom.

Ryssdal: Well you put them to work in the stockroom, right?

Nese: No I want put them to work. I said, ‘what do you want to do?’ They said, ‘Oh we want to be the soda samplers.’ And I said, ‘no you’re going to start where everybody is supposed to start.’

Ryssdal: John thanks a lot. I really appreciate your time.

Nese: Well, thank you. Thank you very much for coming.