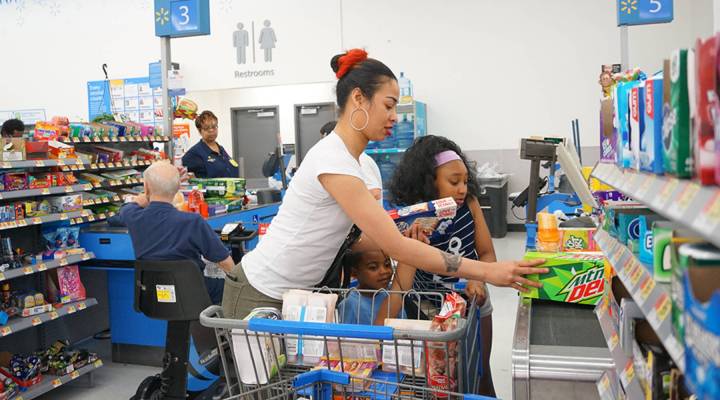 COPY
Latoya Roberts and her three children shop at a Walmart in a suburb outside of Pittsburgh. Erika Beras/Marketplace

Latoya Roberts and her three children shop at a Walmart in a suburb outside of Pittsburgh. Erika Beras/Marketplace
Listen Now

Jamie Aronton doesn’t have a bank account. Instead, she uses Money Mart, a check cashing spot in Pittsburgh, to direct deposit her salary onto prepaid debit cards. She makes $12-an-hour in a housekeeping job and said that by the time her deposits come through her cards are pretty tapped out.

“I can’t afford to save anything right now. I work paycheck-to-paycheck,” she said.

Nearly half of all Americans don’t have enough money saved to cover a $400 emergency expense. And millions of Americans are unbanked. Walmart is banking on people like them to use its prepaid debit card, called Moneycard Vault, which is tied to a prize-linked savings service.

The way the Vault works is simple: Users deposit money on Walmart prepaid debit cards, which they get at the retail giant. The cards can be used  anywhere, but customers can only get cash back when they shop at Walmart. There are no fees so long as there is money on the card, and it’s linked to a Vault savings account. As an incentive to save, Walmart runs a sweepstakes every month with cash prizes for those who save.

“It’s actually kind of an old idea but it was new to us when we first heard about it,” Matthews said.

Prize-linked programs have been successful for decades in Europe and Latin America. But they only started making headway in the U.S. a couple years ago, mostly through credit unions. Brigitte Madrian, a behavioral economist at Harvard University, says these programs appeal to our human nature.

“When people face decisions that are complicated and hard and that don’t have a deadline the natural tendency is to procrastinate,” she said.

Madrian says the hardest part of saving is starting. But programs like Walmart’s push people to become proactive, even if saving just a small amount each month. And the possibility of winning a prize is not only a good incentive but can also give people the luxury of dreaming.

“Just the idea that they might win gives them the license that they don’t feel they otherwise have to think about how their lives would be changed and all the many ways it might be better if they did win the lottery,” she said.

Factory worker Dawn Paquin makes $1,200 a month and said saving seemed impossible. Then she started using the Walmart Vault, putting a bit aside here, a bit aside there.

“Once they got me saving, it’s kind of addicting,” she said.