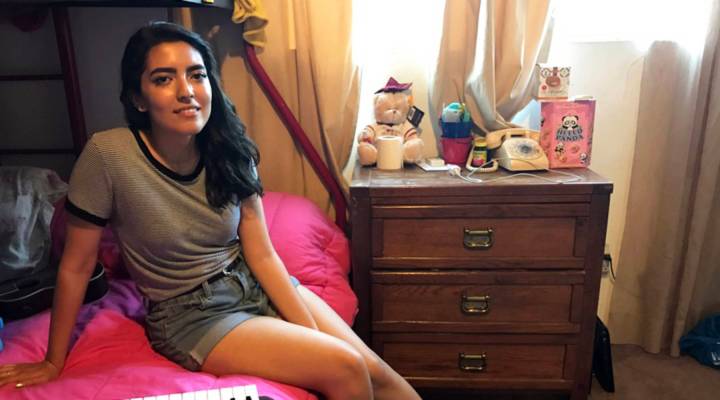 COPY
Eighteen-year-old Martha said a big reason she's staying at home for college is to help support her mom, who's undocumented and fearful of deportation. Reema Khrais/Marketplace

Eighteen-year-old Martha said a big reason she's staying at home for college is to help support her mom, who's undocumented and fearful of deportation. Reema Khrais/Marketplace
Listen Now

Many of Carlos’s childhood memories were on made on Pacific Boulevard, a street in the largely Latino neighborhood of Huntington Park, California.

“We’re all kind of raised here. That was a big one right here,” he said, pointing to a clothing store. “When we were younger, that’s where you’d go get your uniform for school.”

This year, Carlos came to this street to prepare for school in a different way. He would set up shop at Tierra Mia, a coffee spot, and order the usual, a mango smoothie.

“I’ve come here a lot for interviews for colleges. I had my Princeton interview here,” Carlos said.

Carlos — a chatty 17-year-old with a small build — met with alums from different schools to put a face on his laundry list of accomplishments: student body president, founder of the mock trial club, preschool and Planned Parenthood volunteer, distance runner and, of course, a straight-A student. His efforts paid off — he’s been accepted to Princeton, Columbia, Yale, Harvard, and seven California schools, including UCLA and Berkeley.

Carlos, who was born in Mexico, is undocumented, which is why Marketplace is not disclosing his full name. He explained that he wanted to feel protected from detainment or deportation, especially given the recent crackdown on illegal immigration. When making the decision where to go, Carlos weighed everything from financial aid packages and academics to distance and student climate. But in the end, he said one thing tipped the balance: his safety.

“It’s so unpredictable at these times that having that type of protection in a campus — like being a sanctuary campus — is really reassuring,” Carlos said. He said it was important to choose a school “where you can be kind of safe and be able to just focus on your studies, rather than focus on whether or not you might not be there the next day or something.”

This fall, he’ll be going to Yale, where campus police aren’t allowed to ask about immigration status and the school has vowed to support undocumented students if they need legal help. His brother is already a junior there, so Carlos knows his parents won’t worry as much. But he said he’ll worry about them.

“At any time I’m over there, something might happen to my parents,” he said. “And it’s something you have to just kind of keep in the back of your head all of the time.”

Eighteen-year-old Martha knows the feeling, which is why she’s sticking close to home in San Diego.

Currently, Martha, who was also born in Mexico and is undocumented, lives in a two-bedroom apartment with her parents and two younger siblings. Her room, which she shares with her 14-year-old sister, is coated in pink , down to the bunk bed.

She gets the bottom bunk, which is where she’ll keep sleeping once she starts college in the fall at San Diego State University.

“I feel like I should be home, like I always have that weight on my shoulders. Like guilt. My mom needs me right now,” Martha said.

Martha’s mom, Nancy, who is a housekeeper, said she’s been afraid to leave the apartment since the election.

“Because she’s scared that at whatever place they could retain her and take her away,” Martha said, translating for her mom. “She doesn’t have a life outside home and work.”

So, Martha runs errands and gets groceries for the family. There was a time when she felt like she shouldn’t even think about going to college. But her mom said she wanted Martha to have what she couldn’t: an education.

“I can’t just give up now,” Martha said. “Or else everything they [her parents] did for us would be, like, useless.”

Come this fall, Martha said she wants to study math.

“Calculus was amazing for me, so just to keep going is going to be mind-blowing,” she explained.

Meanwhile, Carlos was considering majoring in physics at Yale, but thermodynamics and fluid mechanics have become more of a hobby lately. Instead, political science has been on his mind.

“I think if you asked me, like, three years ago, if I would’ve been interested, I would’ve been, like, ‘no’ ’cause I always hated politics,” he said. But after the election, Carlos said he realized that undocumented people need a stronger political voice.

“I saw the struggles that we had as a group of people, and maybe I can do something to help change that,” he said.