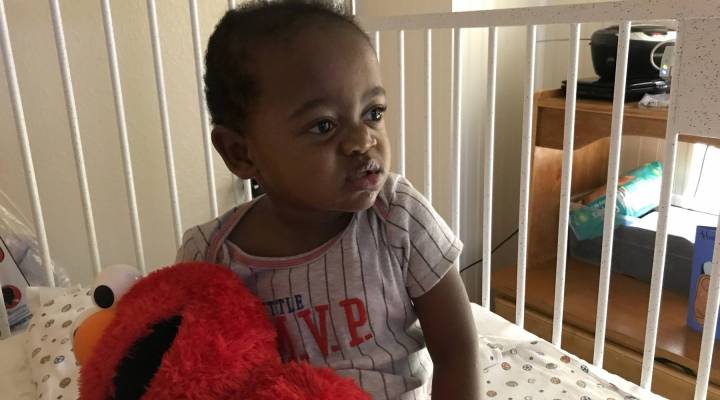 COPY
Patients at Totally Kids Sun Valley live in the sub-acute hospital so that they can receive 24/7 care. All are dependent on either feeding tubes, breathing machines, dialysis or some combination of these treatments to stay alive.  Eliza Mills/Marketplace

Patients at Totally Kids Sun Valley live in the sub-acute hospital so that they can receive 24/7 care. All are dependent on either feeding tubes, breathing machines, dialysis or some combination of these treatments to stay alive.  Eliza Mills/Marketplace
Listen Now

If you didn’t know what you were looking for, you might miss Totally Kids Sun Valley Specialty Healthcare. The hospital shares a parking lot with a church, tucked away in a mostly residential neighborhood. From the outside, there’s no indication that behind the stucco white walls and green courtyard are 45 children who live in the hospital, kept alive by machines and the 220 medical staff who work in the facility.

Totally Kids Sun Valley is a pediatric sub-acute center— a skilled nursing facility that is often the place children go after a visit to the pediatric or neonatal intensive care unit.

The kids who live there are all reliant upon ventilators, feeding tubes, dialysis or other medical machinery. They range in age from just a few months to 21-years-old, with a variety of different medical issues that require long-term care — from congenital abnormalities or organ failure to spinal cord and brain injuries.

Totally Kids Sun Valley is one of only five sub-acute pediatric hospitals in Southern California. There’s frequently a waiting list for one of the 45 beds. Hospital owners Bob and Michelle Nydam keep a close eye on their patients, the unfolding healthcare debate in Washington D.C. and what it could mean for the specialist facility.

Running a small hospital is, in many ways, like running any other small business. Then come the complications — mostly human, because, as Michelle Nydam puts it, the hospital is responsible for the emotional well-being of the kids who live there. “Sometimes it’s an internal conflict to provide the quality of care and have a budget,” she said.

“The patient budget that comes from Medi-Cal is about 95 percent,” said Michelle Nydam, who is the hospital administrator as well as the co-owner.

Bob Nydam said that money goes into paying the 220 staff and keeping the hospital running. “In terms of the facility, we have to be up and running all the time,” Bob Nydam said. “Since kids are on ventilators and respirators, this can never shut down, so we have backup systems to our backup systems.”

Without funding from Medi-Cal or Medicaid, families with children in hospitals like Totally Kids Sun Valley would largely be unable to afford the level of care required to keep the children alive and well.

Changes to Medicaid could change things significantly for hospitals like Totally Kids Sun Valley. Bob Nydam says he’s concerned about cuts to Medicaid in the American Health Care Act. “The burden would go even more on the states” he said, “a state like California, we’re fortunate…but we use a lot of our own operating budget to fund these services. And if [funding] is going to cut back, it’s going to come from somewhere, and I don’t know where.”

That worries Michelle Nydam, too. Without Medi-Cal, prospects for the hospital would be dim. “We wouldn’t exist,” she said, “and so what happens is that now you’ve got the kids that we take care of going back to the NICU, or the ICU…what you’ve got then is a cost that’s five times more than what it is here and you’ve got the ICU units full. I don’t know what they’d really do with kids that really need the high level of care.”

Cuts to Medicaid could mean job loss and budget cuts for places like Totally Kids Sun Valley. The Nydams aren’t the only ones pondering the ways that cuts to Medicaid could impact their business. In states that took the ACA’s Medicaid expansion, opioid rehabilitation, nursing home care and other small health care facilities could be hamstrung.

For people who think of health care as a visit to the doctor’s office or a big regional hospital, the difficulties that small facilities face are largely invisible.

“I do think there’s a layer that goes unseen, and I think that people want it to go unseen, because it’s hard to look at,” Michelle Nydam said, “I don’t think we all want to think of ourselves as getting old, and being in a [skilled nursing facility], and here, I think people don’t want to think of their kids as being in a pediatric sub-acute. It’s easier to look away, and I think people want to look away. But you have to focus on the healing.”