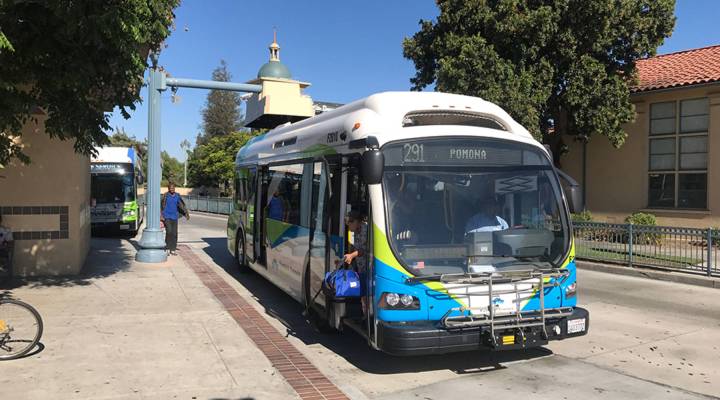 COPY
An electric bus pulls up to the Pomona, California transit center. Proterra sold its first electric buses on the west coast to Foothill Transit, the group in charge of running Pomona's buses. Andy Uhler/Marketplace

An electric bus pulls up to the Pomona, California transit center. Proterra sold its first electric buses on the west coast to Foothill Transit, the group in charge of running Pomona's buses. Andy Uhler/Marketplace
Listen Now

More than 70,000 transit buses run across the U.S. and most of them run on gas. But the Los Angeles County Metropolitan Transit Authority, the second largest agency of its kind in the country, said it’s going to replace more than 2,000 of its buses with electric ones to help the state reduce greenhouse gases.

Well, they’re going to need to get those buses from somewhere.

Some of them are bound to come from a brand new factory in Walnut, California —  just outside of Los Angeles. The company that makes these electric buses is Proterra. It has a good problem: it can’t build buses fast enough to keep up with demand.

Plant manager Paul Mottram has about 30 people working for him in a 150,000-square-foot warehouse where the buses get assembled. Assembled, not built. The company outsources most of the parts — the body, axles, seats and tires. Workers in Walnut are more electricians than mechanics, connecting high voltage lines needed to get the bus up and running.

“They’ll be carrying out a lot of activity underneath the bus,” Mottram explained as he walked from work station to work station. “You’ll see a lot of cabling and electric infrastructure going into place, and very quickly from this point on it will transform into a good looking bus.”

The 150,000-square-foot Proterra electric bus warehouse in Walnut, California has about 30 people working there, for now. Electric bus makers are scrambling to ramp up production to keep up with demand.

In order to meet incoming orders, Mottram is interviewing five people a day to ramp up the staff. But Proterra’s most important and innovative work is not assembling the finished bus. It’s building the battery.

“Probably two thirds of our R&D goes towards high voltage systems, including battery pack,” said Proterra CEO Ryan Popple. He got interested in the idea of electric vehicles after spending four years in active duty in the Army, hanging around in oil-dependent countries in the Middle East.

“One of the impressions that I took away from the Army that was very hard to forget was just how unsustainable or how tenuous our current energy paradigm is,” he said.

That interest in alternatives to fossil fuel led Popple to Telsa, where he worked on the finance team. At Proterra, the technology challenges are different than for an electric sedan. The battery pack for a 40-foot bus is about the size of a twin mattress. His latest model gets about 350 miles per charge.

A regular diesel engine bus costs about $500,000 and lasts 12 years. An electric bus could run you up to $800,000. But Popple said the savings in fuel costs over the life of the bus make up the price gap.

Unlike the market for Teslas, Popple’s clients — cities, counties and states — care more about reliability than novelty.

Proterra’s first electric bus shuttles people around the grounds. The company takes every new employee out for a spin to give a sense of the difference between traditional buses and electric vehicles.

“The goal is to make sure that it’s still a bus,” he said. “We don’t think we’ll have too much luck selling a hover bus or something like that at this point. It needs to be a heavy-duty city transit bus, it’s gotta last 12 years in industrial service.”

Proterra sold its first buses to Foothill Transit in Pomona, California in 2009. Now, about every other bus at its depot is electric. And they’ve ordered another 15.

Driver Luis Rios said he doesn’t think about the buses being different, anymore.

“It’s pretty much the same,” he said after dropping off a bus full of passengers.

Now, however, he does have to make sure to plug the bus into the charging station when his shift is over. No Foothill Transit bus hits the road without a full charge. He doesn’t have “range anxiety,” the insider term for being afraid your battery will run out.

“We already know the limits and how far you can go with a percentage of the charge,” he said.

Having sold some early adopters on the technology, electric bus companies like Proterra now have to come up with packages for financing, maintenance, and longer battery range to make it easier for other bus fleets to make the switch.