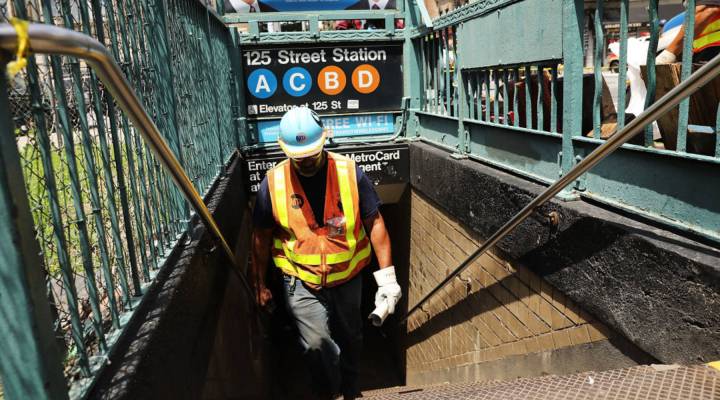 Fourth of July weekend is one of the busiest travel weekends of the year, which means there are going to be lots of people using airports and interstate highways. But there’s another part of our transportation network that tends to be forgotten — public transit.

New York Gov. Andrew Cuomo declared a state of emergency over the problem. But that raises the question: What would it cost to fix the subway? And why should this matter to people outside of New York City? Marketplace Weekend host Lizzie O’Leary spoke to David Bragdon, who’s the executive director of the TransitCenter, based in New York. The following is an edited transcript of their conversation.

Lizzie O’Leary: What is causing this?

David Bragdon: The basic root of it is lack of proper maintenance and taking care of what we have. And also, then, expanding capacity as ridership has grown.

O’Leary: I mean, does it all just boil down to money?

Bragdon: Actually, I think to be honest, it’s also how money gets spent. There’s no question that more money is needed for transit. But I think it’s also fair to say that money needs to be spent more effectively. And we’ve starved transit in most places. It doesn’t have a steady stream of funding, and so has not been able to establish itself the way it does in other parts of the world.

O’Leary: I mean, someone listening to this interview in Illinois or Michigan, where my father’s from, might say, “Well, I don’t care if Lizzie has trouble getting to work on a Monday or Tuesday. Why does this matter in a national context?”

Bragdon: Well, metropolitan regions are the driver of our economy now. If New York goes off line and people can’t get to work in New York — what is New York, 10 or 12 percent of the national GDP? It’s a very important part of the economy, and that tends to be the case for the metropolitan areas in just about any state. And if they’re not functioning, and transportation is a big part of how they function, that’s a big problem for the economy. So transit really is important to everybody in this country whether they use it or not. There is something that they do that depends on it.

O’Leary: There are other places, I mean, I think of London, which have old and giant subway systems. And, I know that there are folks in London who would complain about it, but not in the way where every day in New York, you know, derailment, delays. How do other places fix this, and have they done that successfully?

Bragdon: They have, and it’s, you know, it’s not a technical issue. London, Paris, Tokyo, they’re all the largest city. They all have national governments that help to fund transit, and transit is seen as central part of life for the population. We’re in a country where we actually have a federal government that is hostile to urban areas. The federal government, the way it’s constituted in terms of the Senate and the representational system, urban areas are at a big disadvantage.

O’Leary: Or rural areas get, you know, just as much political representation, they would say.

Click the audio player above to hear the whole interview.