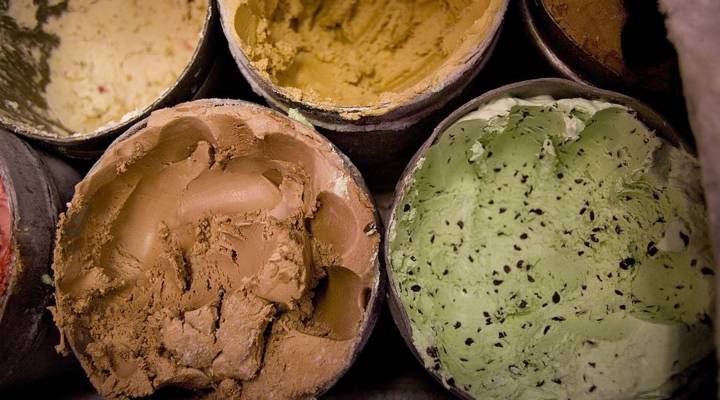 COPY
“Sometimes my husband jokes that I’m running a gelato non-profit, and it certainly does feel that way,” said Uli Nasibova, owner of Uli’s Gelato. David Paul Morris/Getty Images
Brought to You By

There’s a lot more to the favorite summer treat than sprinkles and hot fudge. The story behind ice cream includes American presidents, ice cream truck wars and different stops across the country. Amy Ettinger is a journalist and ice cream lover who toured the country for her new book, “Sweet Spot: An Ice Cream Binge Across America.” She and Marketplace host Kai Ryssdal took a deep dive on the classic frozen treat. The following is an edited transcript of their conversation:

Kai Ryssdal: We should say here that you are just the latest in a very long line of ice cream aficionados in this country. I mean, it goes way back.

Amy Ettinger: We have been eating ice cream since the beginning of the country, starting with George Washington. He had an absolute love for ice cream. He started serving it at his official functions in New York and Philadelphia, and it took the elite in this country by storm.

Ryssdal: And he at one point, you say, spent the equivalent of, like, $3,000 in a summer or something on ice cream?

Ettinger: He spent about $200 on ice cream, back then.

Ettinger: Yeah. And it wasn’t easy to make ice cream back then. He had ice houses built, and so did Thomas Jefferson. It was obviously well before electrical refrigeration. And I do sort of wonder if that part of it, the aspect of “This is really difficult and yet we can do it” was why they loved it so much.

Ryssdal:  This skips ahead a good deal in the chronology. But there is something visceral about ice cream. I mean, I hear, like, ice cream bells on a truck or something going by and I’m 15 again, running down from the pool to the Good Humor truck.

Ettinger: Absolutely. That sounds just triggers something, and sometimes it can actually be negative associations. In New York City, they go insane from all the sounds of the ice cream truck.

Ryssdal: Talk to me for a second about ice cream trucks today, because, as you said, New York City, they go crazy because it’s too loud. But there is actually an entire industry of how you get the routes and where the trucks are. And they’re expensive.

Ettinger: You know, I, as a consumer, never really thought about the business part of  ice cream until I started researching what goes on with these ice cream trucks, especially in New York City, where the people who are driving these trucks, that’s their business. That’s their livelihood. And so you have what has turned into some very bloody turf wars. I rode on the back of an ice cream truck, one of those sort of very classic hard trucks. She serves those pop prepackaged novelties. And she’s Maria, the ice cream truck girl. She took over her dad’s route. Her dad was a Good Humor man in the 1940s, and she took over his route, and she’s competing with a lot of the Mister Softee trucks who are now moving into what she considers her territory. So she’s been arrested. She’s got into a bloody fist fights with them. She’s taken their keys and thrown them on their truck so they can’t drive around on her route anymore. And at the same time, the soft serve trucks are fighting. I talked to the vice president of Mister Softee, and he said things are so rough and tumble on the streets of New York City that “I cannot offer enough incentive to my drivers to go into New York, because they’re worried about what’s going to happen to them.”

Ryssdal: I don’t mind telling you that I think that has put me off ice cream trucks forever. That’s incredible.

Ryssdal: New York’s a tough city, we all know that. A detour now though to Milwaukee, Wisconsin, and custard. So first of all, is custard ice cream? And if not, what’s it doing in an ice cream book?

Ettinger: I always think of it as sort of a delicious cousin to ice cream. It’s very, very similar, obviously. It’s a little eggier. And you’re not going to find good custard in the supermarket grocery aisle. We live in this age where almost anything can be delivered to you at any moment of the day, and frozen custard cannot.

Ryssdal: Why did you have to go to Milwaukee to get what you deem genuine custard?

Ettinger: It is considered the custard capital of the world, and there is very good frozen custard in other parts of the country.

Ryssdal: Yeah, because we’re going to get letters here about custard. The custard fans out there, I’m going to hear from them.

Ettinger: Absolutely! But there is a very large concentration of custard stands that are owned by different families in Milwaukee, so I felt like that would be a way for me to test the different custards and really see what all the fuss is about.