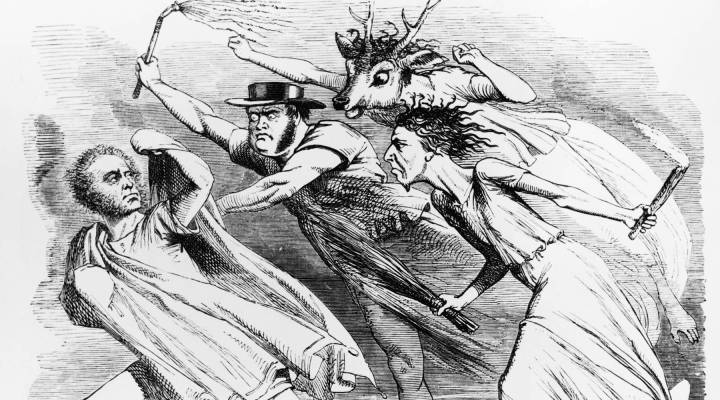 COPY
Greek tragedies — like that of, say, Orestes — can teach us a lot about bankruptcy. Punch Magazine circa 1858/Hulton Archive/Getty Images

Greek tragedies — like that of, say, Orestes — can teach us a lot about bankruptcy. Punch Magazine circa 1858/Hulton Archive/Getty Images
Listen Now

He joined Marketplace Morning Report host David Brancaccio to discuss his latest book, “The Wisdom of Finance: Discovering Humanity in the World of Risk and Return.” Below is an edited transcript of their conversation. Click the audio player above to hear an extended version of their interview.

Brancaccio: So the humanities can be a teaching tool for understanding things that might seem boring but actually guide our lives at different levels. I’m thinking, reading the book, “Insurance. Really, insurance?”

Desai: Yeah. I mean, insurance is the most mundane thing for most people in the world. What’s wonderful about insurance, as I was writing the book, I came to realize that, you know, risk and insurance are the core of finance. And it turns out that risk and insurance are the core of a lot of people’s lives. And in fact, the story I tell is the story of Charles Peirce who’s this remarkable philosopher and the founder of pragmatism who ends up at the end of his life going around the country saying, “We are all insurance companies,” which is very jarring to everybody and they think he’s crazy.

Brancaccio: I know he gives a lecture at Harvard, and people were, like, “Oh, this guy’s lost it.”

Desai: And then Peirce shows up, he gives this lecture, and he’s driving the first-order conditions for pricing insurance policies, and everybody thinks he’s completely crazy. But what he understood is that the problem of an insurance company is the problem of a human being, which is there’s chaos and there’s randomness in the world, and you’ve to figure out how to navigate it. And pragmatism is the philosophy which says go out and sample, get experience, don’t introspect. And that is exactly what insurance companies do. So that’s the sense in which he meant it as we are all insurance companies.

Brancaccio: This really surprised me: The study of bankruptcy, you argue in the book, is clearly about how to deal with failure. But it’s also about resolving, you say, conflicting commitments that we made.

Desai: I told a story of American Airlines, which was the last airline to go bankrupt. The first CEO said for a long time he’ll never go bankrupt, because it was his duty to make sure every obligation gets paid off. Of course, he gets dragged into bankruptcy at the very end, they switch the CEO. The second CEO comes in, restructures all the obligations, guts the pensions. But American Airlines goes on to live another day. So the idea there is, you know, who’s the hero of that story? Is it the guy who said, “I have to stand by all my obligations,” but took the company down? Or the guy who said, “I actually got to manage these conflicting obligations”? I traced that and I make a correspondence between that and, you know, Martha Nussbaum’s really remarkable work, “The Fragility of Goodness,” where she looks at all the Greek tragedies and she says, “Fundamentally, this is about undercutting the idea that you have to follow duty.” Most Greek tragedies are about people who have these conflicting obligations, and it’s a mess, and you have to navigate them. And she says that’s a good life. If you don’t have conflicting obligations, you’re doing something wrong. So that’s the sense in which bankruptcies are really illustrative, I think.