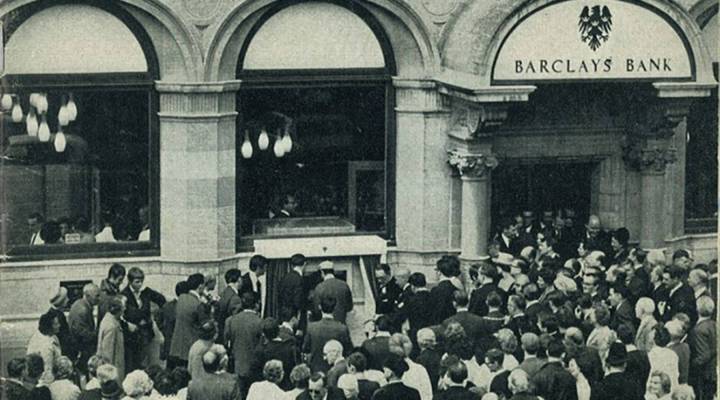 COPY
People gather to see a demonstration of the "robot cashier" in Enfield, England.  Courtesy of Bernardo Batiz-Lazo

People gather to see a demonstration of the "robot cashier" in Enfield, England.  Courtesy of Bernardo Batiz-Lazo
Listen Now

From the entrance of Chase Bank’s World Trade Center branch in Manhattan, you can’t see any teller windows. They’re tucked around a corner, sometimes covered up by a remote-controlled curtain.

Instead, you’re greeted by a row of ATMs.

“This is the branch of the future,” said Weston Guy, the branch manager.

The ATM screens look like really big iPads standing upright on kiosks. And they let you do things a lot of other ATMs don’t — like pay your credit card bill, get five dollar bills or withdraw several thousand dollars.

“You don’t have to use the teller anymore,” Guy said.

At Chase’s new ATMs, you’ll soon be able to get cash using your smartphone.

A brief history of the ATM

The first ATMs weren’t quite as sophisticated.

On June 27, 1967, in a suburb of London, Barclays Bank installed a machine that allowed customers to withdraw cash using paper vouchers. The British press called it the “robot cashier.” Soon, other banks in the U.K. and Sweden came out with their own machines.

A lot of bank tellers despised the new machines. Some even resorted to sabotage.

A users guide for the first ATM.

At Barclays, the bank’s technicians kept finding the machines’ keypads sticky. Turns out, tellers had been sneaking outside and covering them in honey, said Tom Harper, the founder of the ATM Industry Association. “It was just a great fear of automation,” he said.

In the early days of ATMs, tellers didn’t have much to worry about when it came to losing their jobs — the machines were not exactly user-friendly.

“They were very fragile,” said Bernardo Bátiz-Lazo, who teaches business history at Bangor University in Wales and co-wrote a book about ATMs with Tom Harper. “If one component didn’t work, the whole machine shut down.”

It took a while for the technology to mature. Once it did, ATMs started to catch on. In 1980, there were about 54,000 of them globally, according to the U.K.-based research firm RBR. By 2000, there were more than a million. Today, it’s more than 3 million.

Before the debit card, there was Barclaycash.

Self-service wasn’t a new concept when ATMs were introduced — gas stations had self-service pumps and for decades, there had been cafés called automats, where you could put coins in a machine and a sandwich would pop out.

But ATMs went a step further. They upended a central relationship in people’s lives— the one they had with their banks.

Before ATMs, banks were open every day except Sunday from 9 a.m. to 3 p.m. You had to go to the tellers to get cash, so you got to know the staff.

“Banks used to encourage that,” says Barbara Kahn, who teaches marketing at The Wharton School. “They used to give you toasters and have all sorts of fun things for you to do in the bank if you would open new accounts. It was a social activity.”

ATMs changed that dynamic and laid the groundwork for banking away from the bank — on the phone, online, and ultimately, on your smartphone.

So what happened to the bank tellers? Between 1970 and 2010, banks were building a lot of new branches. The total number of tellers in the U.S. doubled, but there were fewer people working at every branch.

Now, because of mobile banking and new ATMs, more than 100,000 teller jobs have been lost in the past decade, according to the Bureau of Labor Statistics.

The role of the bank employee has also changed, says Ken Justice, an executive at PNC Bank. “The conversations that are taking place today with a banker are more about life events,” Justice said, “You know, ‘I’m getting married,’ or ‘I’m going to buy a house,’ or ‘I’m thinking about retirement planning.’ And those are all conversations that go beyond, ‘Hey, when you cash that check, can you give me five 20s and three tens?'”

It’s a familiar story. “Automation will replace, and has replaced, historically, any kind of routine job,” says Louis Hyman, who teaches financial history at Cornell University. The idea in the long run, he says, is that machines will free humans from repetitive work like cashing checks and counting bills.

As for the robot cashiers? They’re still changing. Banks are testing next-generation ATMs that you can operate with your fingerprint, your mobile phone, and even a scan of your eyeball.