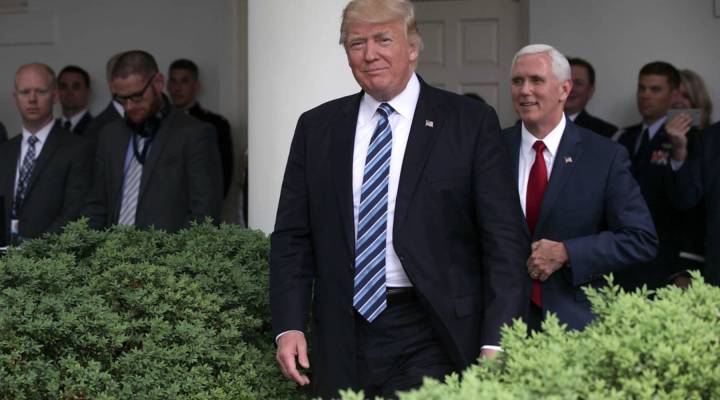 COPY
John Paul Rollert, a professor of business ethics, says President Trump, above, with Vice President Mike Pence, has been chafing at a “series of customs and norms around public disclosure.” Alex Wong/Getty Images

John Paul Rollert, a professor of business ethics, says President Trump, above, with Vice President Mike Pence, has been chafing at a “series of customs and norms around public disclosure.” Alex Wong/Getty Images
Listen Now

One of the president’s main pitches for his presidency was the assertion that business management equates to government experience. While, yes, a for-profit business is not the same thing as government, consider this thought experiment for a moment: In a way, the president’s transition from running the privately owned Trump Organization to the U.S. government is sort of like going public. And like companies that go public, the president has been met with all sorts of unexpected challenges, not the least of which is public scrutiny. In order to play out this thought experiment, Marketplace host Kai Ryssdal called up John Paul Rollert, a professor of business ethics at the University of Chicago Booth School of Business. The following is an edited transcript of their conversation.

Kai Ryssdal: So let me tell you where this interview came out of. We were sitting around the morning meeting one day, and we got to thinking about the presidency vis-a-vis a publicly traded corporation, and how when companies go public, it is painful for them because then they have to answer to shareholders, they have to answer to Wall Street, they have to answer to a whole bunch of different people. And somebody at the meeting said, “That’s kind of like what’s happening with the president. He now has to answer where previously he never did.” What do you make of that argument?

John Paul Rollert: Well, I think you’re exactly right. I mean, as a person who, for decades, has run a privately held company, he can keep most of his business doings to himself. And now he finds himself in this situation where he’s entirely obligated to make known his deliberations, his hiring decisions. And for someone who has always conceived himself as a dealmaker, it’s hard to make good deals if you essentially have to give a counterparty all the information that you have at your disposal. But I think, in respect to the presidency, the question is: Who exactly is on the other other side of the deal?

Ryssdal: You used an interesting word. You said the president is obligated to make those disclosures, to have those conversations. Yet, I think what you’re seeing, and let’s just pick this example of the White House press briefings now being off-camera and sometimes without audio included, it appears that lesson has not yet been learned.

Rollert: Well that’s true, but I think that what you’re referring to are a series of customs and norms around public disclosure that we see the president chafing at. Now, it’s true a lot of these customs have kind of recent parentage. I think it’s only during the Clinton administration that you actually had daily televised press briefings. But I think the broader idea, that the public has a right to know the deliberations of the president, and the people around him, and how he’s coming to his decisions seems to me a pretty important democratic norm.

Ryssdal: Extend for me, then, my somewhat imperfect metaphor of the presidency and the publicly traded corporation that I started with. What’s the impact on the presidential bottom line, if you will, of a continued deterioration of norms and transparency?

Rollert: Well, you know, it probably depends on whose perspective you take. I mean, certainly presidents love to keep a lot of their deliberations private. But I’d like to believe that most of them recognize that when you’re a democratically elected leader and you’re making decisions that certainly don’t have unanimous consent, you owe it to the broader public to explain how you reach those decisions.

Ryssdal: The market has a way of correcting corporate behavior. You know, if you put out a bad product, consumers won’t buy it. You will pay a price. What’s the remedy here for this type of behavior, on the part of the executive?

Rollert: Well, I mean, the most obvious market correction comes on Election Day. But of course, for them to reach intelligent decisions in the same way stockholders need to be able to reach intelligent decisions, you actually have to have the correct information about the ways in which decisions are being arrived at. In the same way that the SEC mandates that publicly traded companies make that information available to stockholders, the law and certainly custom, demands that that information is made available to voters, and it should.