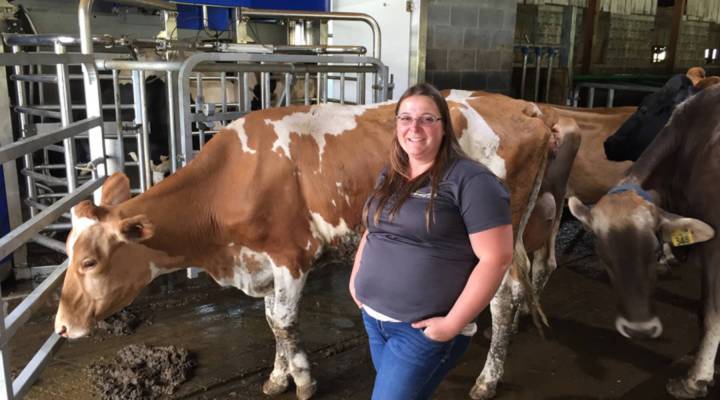 COPY
Dairy farmer Vickie Baker stands in the holding area in her barn, where cows wait to be milked by a robot. They go through the gate behind her to stand in a cow-sized chamber where the robot attaches milkers to them. Annie Baxter/Marketplace

Dairy farmer Vickie Baker stands in the holding area in her barn, where cows wait to be milked by a robot. They go through the gate behind her to stand in a cow-sized chamber where the robot attaches milkers to them. Annie Baxter/Marketplace
Listen Now

Vickie Baker is a farm consultant in southwestern Pennsylvania who sees dairies struggling to find workers all the time. It’s hard to attract people to physically demanding, dirty farm work. That’s especially true at dairies, where cows need to be milked year-round, several times a day, including the middle of the night.

But Baker also has first-hand experience with the problem. A few years ago, one of two workers she and her husband employed to milk 60 cows at their business, Maple Bottom Farm, abruptly quit.

“After 16 years of working for us, she sent us a text message and gave us two weeks notice,” she said.

Locals weren’t interested in the work. Many dairies rely on immigrant labor, often undocumented. But Baker said the few Hispanic immigrants she employed didn’t feel at home in that part of rural Pennsylvania and moved away.

“We knew at that point in time that we were either going to have a robot or we weren’t going to milk cows,” she said. So last year she and her husband, Mike, took out a loan and invested in an automated milking system that cost about $250,000.

The cows decide when to be milked — their udders feel full or they’re keen to get raspberry chocolate pellets as a treat during milking.

The first step is to pass through something like a security gate. Each cow’s ear holds a digital tag with her personal identification number, which gets scanned.

“There’s only one for each cow in the U.S.,” Baker said. “It’s like a cow Social Security number.”

If the cow’s not due for milking, she can’t gain access. If she waits too long, the Bakers get alerts on their phones and go nudge the cow.

Next, the cows make their way into a kind of lactation waiting room to await their turn at the robot. Some are more aggressive than others in pushing to the front of the line. When a cow’s turn comes up, she passes through another gate into a small, closet-sized chamber, where a robot scans her ID and pulls up her data.

“It just recognized her as cow 430,” Baker said as a cow stepped forward. “Her name is Pita, like pita pocket.”

A robotic arm swoops underneath Pita. Its laser eye shoots a red light, searching for her teats. It’s been trained with a joystick to locate the teats on each cow’s udder.

The robot cleans the teats and preps them for milking. Then it attaches teat cups, and the milking begins.

It’s a remarkable contrast: This futuristic robot working on a nearly 1,400-pound, living, breathing creature that is swishing its tail and sometimes relieving itself. Flies buzz all around.

A computer screen shows how much milk Pita usually produces, what she’s producing currently and the flow rate of her milk.

The robot does all the Bakers’ milking now. It can handle the size of their herd. But Baker doesn’t think robots can solve the labor shortage across the board, especially at bigger dairies.

“One unit costs $250,000. If these farms milk a thousand cows, they’re going to need 25 robots,” she said. “That’s an upfront capital investment no dairy can afford today.”