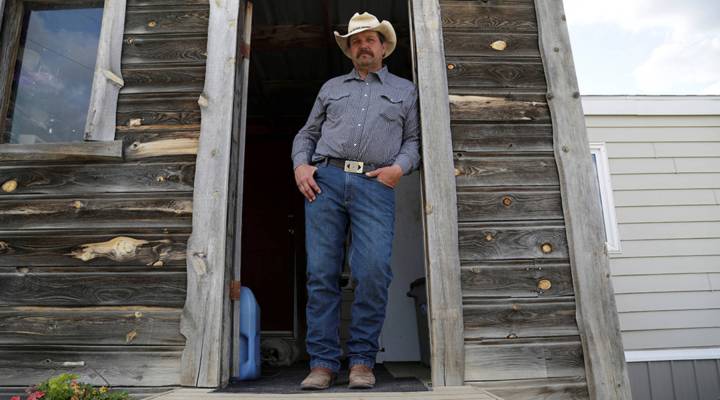 COPY
Rancher Matt Knox on his family land near Winifred, Montana. Knox is part of Missouri River Stewards, a group which wants the Trump Administration to reduce the size of the Upper Missouri River Breaks National Monument and prevent further regulations on farms and ranches. Dan Boyce

Rancher Matt Knox on his family land near Winifred, Montana. Knox is part of Missouri River Stewards, a group which wants the Trump Administration to reduce the size of the Upper Missouri River Breaks National Monument and prevent further regulations on farms and ranches. Dan Boyce
Listen Now

President Trump has ordered Interior Secretary Ryan Zinke to review whether more than 20 large areas designated as national monuments should remain protected. The goal is to determine if monument status too greatly restricts access to public land and economic activity, like timber cutting or oil and gas drilling.

The Upper Missouri River Breaks National Monument in Montana is one of the areas under review. Nearly 400,000 acres in northern central Montana, it gained national monument status in the very last days of the Clinton administration in 2001, cited for its historical significance and rare ecosystem. The law that made that possible, the American Antiquities Act of 1906, is only four paragraphs long, and just one of those paragraphs gives the president power to set aside land of historic or scientific interest as a national monument.

Matt Knox is a Montana rancher who’s been against national monument status for the Montana site since talk of it started. From a bluff that’s part of his family ranch, the expansive view includes land that intersects and overlaps with the federally protected area.

Strong winds blow across the breaks — rough, broken land, deeply cut by the winding Missouri River. Think Western movies, bone-dry gorges with a few stands of evergreens. Though in early June, the land still holds on to a soft blue-green hue of spring.

Knox said he and other ranchers want to manage this land as they have for generations, without a lot of government oversight.

“We cuss the county commissioners, we cuss the state legislature, we cuss the governor,” he said, “and we reserve our, most of our cussing for the federal government.”

Matt Knox has been against national monument status for the Montana site since talk of it started.

He’d like Zinke to shrink the footprint of the monument, saying the Antiquities Act is supposed to protect specific sites, like the Statue of Liberty or Gettysburg.

“The original intent was not to set aside huge swaths of land,” he said.

“I think it’s really important to find a place that is as it was and is unchanged,” she said, “and that is the Missouri River.” Fugere owns Missouri River Outfitters and paddles tourists in canoes to ancient rock drawings, remains of teepee camps and historic vistas.

She gestured toward an area of the national monument that’s important to the story of westward expansion.

“You go down there, and you see the same rocks that were described in Lewis and Clark’s journals,” she said.

Fugere worked summers in the area for years and bought the guide business a few months ago. She’s now part of the state’s multibillion dollar tourism economy. She’s afraid of the area losing protected status.

Nicolle Fugere owns and operates Missouri River Outfitters in Fort Benton, Montana. She leads canoe tours into the monument and wants current protections to remain just as they are.

Chris Mehl, who directs research at a Montana firm called Headwaters Economics, looked at 17 national monuments in the West before and after they received the federal designation. He said the local economies diversified and expanded.

“All net new jobs are in services,” he said. “Everything from health care and accountants and lawyers on the higher-paying end to folks who work in a hotel or the tourism industry on the lower-paying end.”

But the number of people who work in agriculture around those areas is shrinking. That would likely be true with or without national monument status, yet for ranchers like Knox, the switch from an economy that makes use of the land to one that relies on people looking at it is disheartening. Back on his property, Knox just wants to hold on to his way of life. His worst-case scenario: The Upper Missouri River Breaks goes from national monument to national park.

“A national park would be a disaster for us,” he said. “We don’t want to be an inn holder in a national park and flip hamburgers for a living. That’s not what we do, that’s not who we are.”

He said scaling back the acreage covered by the Upper Missouri River Breaks National Monument would send a signal that ranchers like him can have a future in the area working the land.