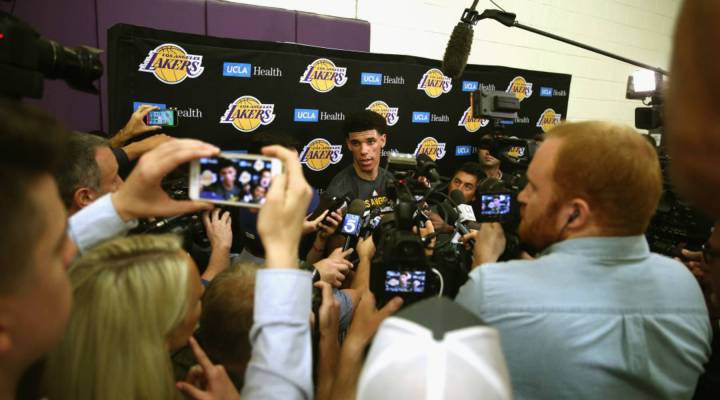 The shoes were Nikes, but to basically every kid in America, they were “Air Jordans.”

Michael Jordan was, and still is, the brand. His net worth today is $1.3 billion.

The lucrative partnership is an example of how Nike leveraged an athlete’s popularity to sell shoes. Back then, what mattered most was Jordan being a great player. Nowadays, how good you are on the court is only one factor in a star athlete’s earning potential.

“These guys now see themselves as businessmen, professionals,” said Todd Fischer, Senior Vice President of Global Sports and Entertainment at GMR Marketing. “They play basketball but then they also understand that they have that platform to do other things with, and they are thinking beyond their playing careers.”

The average NBA career lasts less than five years, so the earning window for a pro basketball player is short.  In fact, social media savvy kids who are good at sports start developing their personal brands in high school, according to Denise Lee Yohn, author of the book “What Great Brands Do.”

“Athletes have become much more aware of their long-term earning potential and they want to start early and feed that,” she said.

Most stars will sign with a large company like Nike, Adidas or Under Armour. But some want to try to make it on their own.

Lonzo Ball is expected to be one of the top three picks in this year’s draft. His father, LaVar, has been outspoken about his belief that his kid’s brand is going to be worth billions. And he doesn’t want to share the wealth with those big companies.

You can pre-order a pair of BBB sneakers that will be autographed by Lonzo and ship in November, or you can buy shirts or hats with the company’s logo. It’s no Nike swoosh, and the Balls aren’t Nike.

They can’t lean on economies of scale like those larger brands. They’re not filling millions of orders, so they can’t just manufacture a bunch of products on the cheap in China. If you want a pair of Lonzo’s autographed shoes, they’re going to cost you $995.

Correction (Jan. 9, 2019): In a previous version of this article, LaVar Ball’s name was misspelled. The text has been corrected.