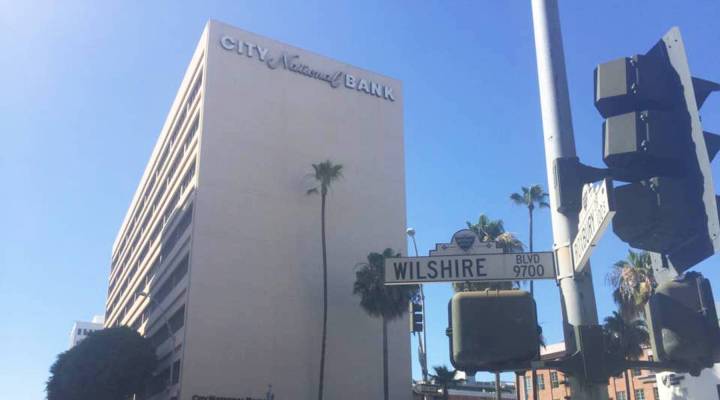 The bank began building its reputation 60 years ago as the go-to lender for the entertainment industry.

“Los Angeles needed a bank that would reach out to a community that was not well served by the biggest banks,” said CEO Russell Goldsmith, himself a former movie executive.

Its status was further cemented when the bank famously put up the ransom money for Frank Sinatra’s kidnapped son. Since then, it’s expanded its base of wealthy clientele beyond showbiz.

City National’s 30 local branches are found mostly in high-end enclaves like Brentwood and Bel-Air in West Los Angeles. But in October, it’s opening its 31st in South Los Angeles, a lower-income region. The bank will fill a Crenshaw district strip mall storefront currently occupied by a payday lender.

“This is really, to some people, a bit of a surprise, to bring a private and business bank into the Crenshaw district, but we think it makes good sense for everybody,” Goldsmith said.

One reason: something called the Community Reinvestment Act. The federal law requires banks to prove they’re serving low-income and minority borrowers. In 2015, when City National wanted regulators to approve its merger with Royal Bank of Canada, it beefed up its CRA commitment, pledging $11 billion in products like mortgage and small business loans. A Crenshaw branch can help it achieve that goal.

“If you just took a casual walk around the neighborhood, you’re not going to see much representation by financial institutions,” said Hassan Nicholas del Campo, microfinance director at Rise Financial Pathways. In a recent study, the nonprofit community lender counted just 16 banks in a large swath of South LA where half a million people live. That’s just 10 percent of the national average. To make things worse, there are 64 payday lenders and 18 pawn shops.

“They just kind of go hand in hand with these low-income communities,” del Campo said.

The payday lender that City National will replace can charge 460 percent interest rates on two-week loans. Still, there’s plenty of people walking through its door.

“As much as we are advocated against these predatory types of services, the reality is that they are needed,” del Campos said. “They do serve a purpose. The trick is, how do we introduce products that compete with these predatory services and at the same time educate consumers about other alternatives?”

In opening a new branch in an underserved area, City National is parting ways with most banks.

Since the recession, banks have closed more than 6,000 branches and cut small business lending by 20 percent. Immergluck said the CRA was passed 40 years ago to prevent those kinds of things.

“But the law has been tepidly enforced,” Immergluck said. “Basically, there was a de-emphasis of CRA during the Great Recession. Banks were under less close observation.”

City National’s commitment has earned praise from fair-lending advocates. Paulina Gonzalez at the California Reinvestment Coalition said the bank sat down with community members and hammered out a strong deal. But in a neighborhood where a new rail line is bringing all kinds of new development and displacing longtime residents, there’s worry the money won’t go where it should.

“City National, just like any bank in that community, is going to have to ensure that the lending it is doing is serving the current small businesses that are located there, and not just those new businesses that come into the area,” Gonzalez said.

With specific goals for small business lending and other services in its CRA pledge, Gonzalez said the bank has a blueprint to make sure that happens.