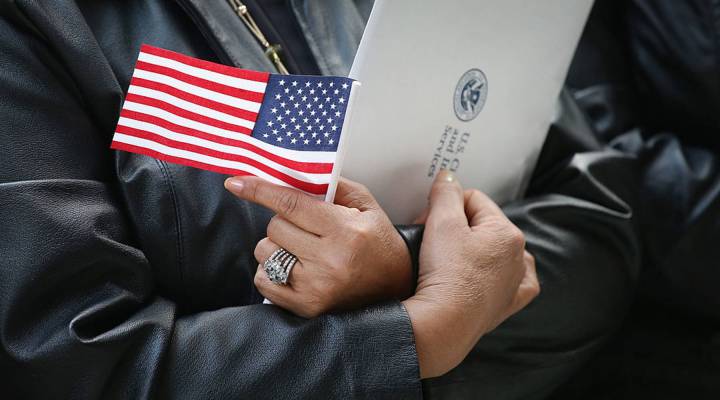 For this latest installment of our series, we hear from an Australian immigrant to the U.S, who has lived in the country for almost nine years, but struggled to stay in America after last January. Due to her ongoing green card application, this person asked not to be named, but Marketplace received verification of her story.

I decided to move to the U.S. almost nine years ago to pursue acting and producing.

I also nanny, which I find is a great job, because obviously acting can be a little unpredictable. And I love kids. Kids are amazing.

The working visa that I’m on I have to renew every three years. And what happened to me at the start of the year was a little frustrating and stressful.

We got a new president in January, and I went back to Australia to do my visa interview, and I let the family that I worked for know that I’d probably be gone for three weeks, and they were completely fine with that. Three weeks rolled around, and I still did not have my visa approval. It turned out that there were administrative delays with the processing, and they couldn’t really provide a clear indication of when my visa would come through.

The family that I’m working with now I’ve been working with for a year. And I was worried I was going to lose my job.

I mean, they were amazing, they just piecemealed help together.

For two and a half months I was unable to get back into the United States, which obviously was incredibly stressful. I’ve lived here almost nine years. I have my apartment here, my job, my car, my life. But I just had to wait in Australia. So every day I was checking the news pretty frantically, because the whole immigration climate was a little up in the air.

I think with loss of wages and legal fees and whatnot, I was down probably $12,000.

I am in the process of going for a green card now so that I don’t have to deal with these renewals anymore. That’s another whole story though. I have to go back to Australia again for my interview for my green card. And again it’s a little unpredictable. It could take a week. It could take two months.

It’s a very uncertain time for foreigners in the United States. It feels like we’re welcome, but we’re not really welcome.

In my community, none of us feel 100 percent confident about our ability to stay here, which is something that I haven’t felt in the entire time I’ve been here until January.