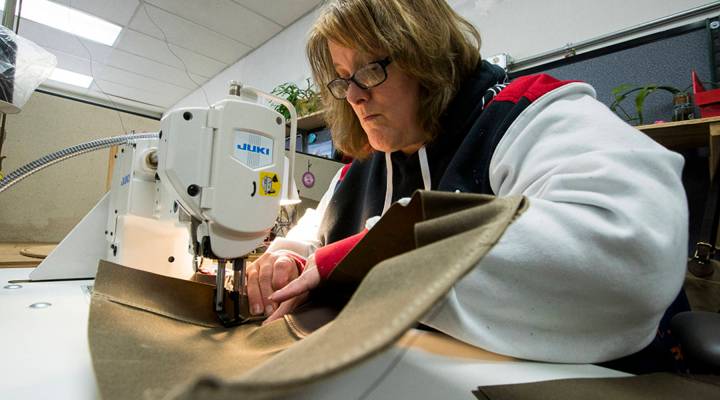 Three decades ago, Duluth, Minnesota, was in the doldrums. A steel mill had just closed. Unemployment was more than 20 percent. Someone posted a billboard on the way out of town that read: “Last one out, turn out the lights.”

“We were as Rust Belt as they come,” recalled Andy Goldfine, who in 1984 rented an old three-story brick building, bought a bunch of used sewing machines and started a company called Aerostich. His vision was to make motorcycle gear for hard-core riders to wear over their work clothes.

“I thought if we made a summer coverall that could give me access to my motorcycle on more than weekends, so that I could start commuting easily in street clothes,” he said, “that maybe other people would like that as well.”

Think James Bond unzipping a wetsuit to reveal a tuxedo underneath.

Employees at Aerostich work on motorcycle-related gear at the company’s home in Duluth.

It took about 10 years for the idea to catch on, but now, Aerostich ships around the world. Downstairs, there’s a small retail store.

Walk upstairs, and it’s like walking back in time.

Light streams through big windows on to an open floor where sewers handmake the gear. This is the kind of light manufacturing that started to leave American cities decades ago for cheaper labor overseas.

But now, because of changes in technology and consumer tastes, smaller-scale manufacturing is making a comeback in urban areas around the country.

In Duluth, Aerostich employs more than 60 people. Its most expensive coverall sells for more than $1,000.

“It’s exporting products around the country, and importing capital into Duluth,” he said.

In the last few years in a blue-collar neighborhood in Duluth, several small manufacturers have joined together to brand themselves as a “craft district” that includes Aerostich, breweries, potters, even a shoemaker. Many of these production jobs pay around $10 to $15 an hour.

And while data is hard to come by, anecdotally, this kind of small-scale manufacturing is spreading nationwide, from New York and San Francisco to smaller cities like Cincinnati and Portland, Oregon.

“I wouldn’t say a boom, but we’re definitely seeing growth,” said Adam Friedman, who directs the Pratt Center for Community Development in New York, which founded a group called the Urban Manufacturing Alliance to promote this kind of development.

Two-thirds of manufacturers employ fewer than 20 people, according to the U.S. Census.

There are challenges to bringing manufacturing back to cities, mainly the cost of real estate or rehabbing old buildings.

But other factors are pushing the trend forward. Technologies like 3-D printing and computer-controlled machine tools are shrinking the size of factories and making them more environmentally friendly. That means they can return to dense urban neighborhoods that otherwise might not want them.

Like products made by a small manufacturer down the street from Aerostich called Frost River, which makes heavy-duty canvas and leather packs.

“When I make something, I want it to look really nice,” said Rose Lerann, a sewer who assembles the packs. “If it doesn’t look nice, then you don’t want anybody to have it, you know what I mean?”

Lerann added she has pride in what she does, a pride in making something that’s slowly returning to American cities.