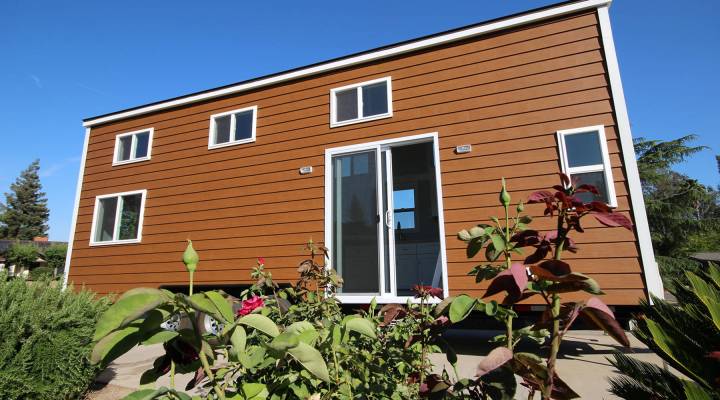 Tiny homes seem like a perfect answer to most of millennials’ problems. They are affordable. They are minimalistic. The are trendy. Except there’s one problem: Tiny homes are not considered homes when it comes to bank loans, making it hard for potential owners to find financing.

“When the tiny house movement started, people were borrowing money, they were getting whatever they could from relatives, cash on hand,” said Bob Clarizio, owner and founder of Titan Tiny Homes. “And they were going to a tiny house company and saying, ‘Build me a house. I don’t care where I have to park it or anything. I just want one.’”

Because tiny homes are portable and their owners could just pack up, get in and move somewhere else, the U.S. financial system does not consider them houses. Instead, they fall into a category with recreational vehicles and mobile homes called manufactured homes — homes that can be made in factory and then moved as needed. Often, they are paid for upfront or bought with funds obtained through a personal loan.

But that could change next year.

The Federal Housing Finance Agency has proposed a pilot program that would allow Fannie Mae and Freddie Mac to provide financing for buyers of manufactured homes. According to Bloomberg, the program could go into effect as early as January. And when it does, it could transform the tiny home industry.

For those binge watching shows like “Tiny House, Big Living,” “Tiny House Nation” and “Tiny House Hunters” all weekend, it might come as a surprise that buying a tiny home is harder than it looks. Most people just assume that they can rent a piece of land and put a house on it. They don’t think about matters such as financing and zoning laws.

“They make it look easy,” said Chris Galusha, president of the American Tiny House Association. “They are like, ‘Ta-da! We’re putting a tiny home here.’ Nobody realizes that behind those shows, there’s a lot of time spent with people negotiating or checking with building officials or taxing authority and stuff like that.”

Inside of a tiny home.

The hope among the tiny home community is that changes to manufactured home financing would be the first step to legitimizing the industry, with zoning and building regulations to follow closely behind.

“I’m always in favor of having guidelines like building codes and regulations, because that protects everybody,” Galusha said. While it might seem counterintuitive for a business association to wish for regulations, having no regulations can create all kinds of safety hazards.

What’s more, banks are more likely to provide loans for products in regulated industry than an unregulated one.

Traditional lending tends to be collateral based, according to Todd Nelson, business development officer at LightStream, a division of SunTrust Bank.

LightStream provides unsecured loans to people who have good or excellent credit. Typically these loans are used for home improvement or swimming pools and, in some cases, tiny homes.

In the three and a half years since LightStream became part of SunTrust Bank, it has issued more than $5 billion worth of loans, but tiny homes make up only a small part of LightStream’s portfolio, according to Nelson.

Clarizio, the tiny home manufacturer, said companies that do not assist their clients with financing could be losing out on business.

As Titan Tiny Homes got off the ground, Clarizio kept running into the same obstacle over and over: How do you sell a home to people who can’t afford it and cannot get a loan to purchase it?

“We were able to find finance products but nothing that was kind of the cure for the issue. It was more of a Band-Aid,” he said.

“A lot of people feel that they need to hunt down this mythical creature of financing for their tiny house or whatever it is that they [are] trying to build that’s just unconventional,” he explained. “But the real issue is finding a bank that already backs the product — so it’s really the manufacturer’s job. It was our responsibility as Titan Tiny Homes to go and find a loan product that was going to work for our customers. It really makes everything so much easier.”

The bet on financing seems to have paid off. Titan, which has been in business since 2015, is on track to sell 60 homes this year.

What if Titan Tiny Homes did not offer financing?

“Oh, we would be out of business,” Clarizio said matter-of-factly. “That’s what I mean, there would be no growth.”

According to him, once potential customers are able to get financing through Fannie and Freddie, the demand for tiny homes could transform the industry. At the moment, many of the clients are limited to specific companies that can work with their current financing options. However, once financing is easier to come by, customers could have more freedom to shop around and find the tiny homes most suited to their needs.

“It will become less of a fad by the hour,” Clarizio said.