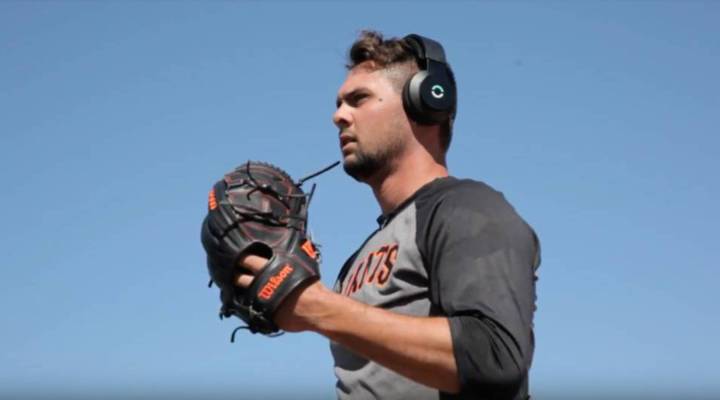 COPY
Tyler Beede, one of the Giant’s top minor league pitchers, wears headphones that deliver electricity to his brain during practice. The team is testing the technology to see if it improves athletic performance. Photo courtesy of Halo Neuroscience

Tyler Beede, one of the Giant’s top minor league pitchers, wears headphones that deliver electricity to his brain during practice. The team is testing the technology to see if it improves athletic performance. Photo courtesy of Halo Neuroscience
Listen Now

The San Francisco Giants, who started the season with the worst record in the National League, are adding a little extra juice to their routine.

About a third of the major league roster, including some big-name players, are working out while using high-tech headgear that sends a weak electric current to the brain, said Geoff Head, the team’s sports scientist. The team is testing whether the technology, called transcranial direct current stimulation, or tDCS, improves athletic performance.

Tyler Beede, one of the Giant’s top prospects in the team’s minor league lineup, wears sleek black headphones while he hurls practice pitches. The silent device over his ears is releasing a faint electrical current into his brain.

“It’s a very unique feeling,” Beede said. “You put it on and it does have that kind of tickling, zapping feeling on your brain.”

Electrodes hidden inside a $750 headset are placed above the area of the brain responsible for controlling movements — the motor cortex. The brain region sends electrical signals from neurons to targeted groups of muscle fibers, causing them to contract. The technology is kind of like plugging the brain into a 9-volt battery to give, in theory, your neurons a little extra juice so they’re primed for action.

The team tried out the headphones in a number of training exercises for two weeks alongside a control group.

“It’s a very unique feeling,” Beede says of the device. “You put it on and it does have that kind of tickling, zapping feeling on your brain.”

Head, the team’s sports scientist, noted the players were able to shave a fraction of a second off their times while running 20-yard dashes. He said even a tiny advantage, like two hundredths of a second, can be “the difference between safe and out.”

Wiring the brain received a pretty bad rap last century when electroconvulsive therapy was used to deliberately induce brain seizures in order to treat mental illness. But tDCS uses a very low-voltage electrical charge. Some people who have jury-rigged their own devices have reported experiencing minor burns, fatigue and nausea.

Ted Zanto, a neuroscientist at University of California, San Francisco, is researching the central question: Does it work?

“To some extent yes, but there’s high amount of variability,” Zanto said.

He said more than 1,000 studies have looked at how tDCS might improve physical actions, depression, chronic pain, even creativity. But the results are inconsistent.

“The effects are highly variable, because everyone has slightly different thicknesses of scalp, thicknesses of skull, different amounts of cerebrospinal fluid, and that’s what the current has to travel through before it even gets to the brain,” Zanto said.

He said there are a lot of unanswered questions. Still, he expects more expensive gadgets to flood what’s now an unregulated market. And as the Giants’ use of the tDCS devices in training shows, elite athletes in a number of sports aren’t waiting for concrete data.