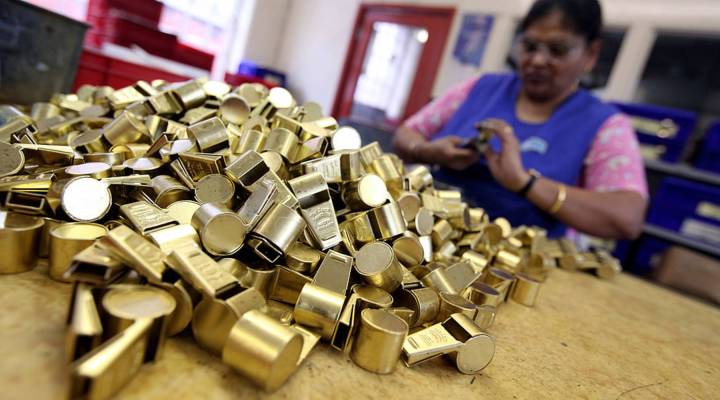 COPY
About half the factory workers at Acme Whistle Co. are immigrants. Oli Scarff/Getty Images

About half the factory workers at Acme Whistle Co. are immigrants. Oli Scarff/Getty Images
Listen Now

After the Brexit vote about a year ago, our partners at the BBC checked in with Simon Topman. Topman is the managing director at the Acme Whistle Co. in Birmingham, England, which does about 40 percent of its business in Europe — and the future felt pretty uncertain back then. After the huge upset in the U.K. general election yesterday, Marketplace host Kai Ryssdal called Topman to check in. An edited transcript of their conversation is below.

Kai Ryssdal: Well, here we are the next day, as it were. What’s your gut telling you about this election?

Simon Topman: Well, it’s telling me, like all businessmen who want security and comfort of knowing exactly where they are, it’s telling me that I don’t. A hung Parliament. What does that mean in terms of government policy, in terms of the U.K. leaving Europe? Heavens, it really is an up-in-the-air situation. And if this election was called to solve some of those problems, it certainly did the opposite.

Ryssdal: Let’s talk about some of the issues you face running the Acme Whistle Company. As we said in that piece that aired last year after the Brexit vote, something like 40 percent of your product goes over to Europe. How worried are you now about hard versus soft Brexit, and all of that?

Topman: Temporarily, the pound has fallen because of all the uncertainty. And that, of course, is very good for me, because it means my product prices overseas are going down. However, that’s just the short term. The fact of the matter is, we no longer know, if we ever did, exactly what sort of negotiation is going to go on between the U.K. and Europe. But what I am sure of is it will take a longer time to sort out than might otherwise have been the case. The politicians have got to get their act together, and until they do, they’re ain’t going to be nothing happening.

Ryssdal: Have you spoken to your European suppliers and/or customers today?

Topman: Yes. Some of them are quite happy. And there’s a sneaking little bit of happiness in me, too. Because it could well be — and certainly my European distributors are hoping — they don’t want us to leave at all, in reality. And if the deal can be a little bit closer, and a little bit better, and a little bit softer, they are happy. And so am I, really, because we are Europeans at the end of the day. And for us to fall out with Europe isn’t a good idea, in business terms.

Ryssdal: We’re speaking to you late afternoon, England time. What has the word on the shop floor been today?

Topman: Well, the thing that bothers them most, I’ll tell you, is immigration, because there is a big feeling here in the U.K. that we have too many immigrants. However, half my factory workers on the shop floor are immigrants of one kind or another. The workers don’t get it, really. They are worried about trying to get an appointment with the doctor, trying to get the children into school. That we will be flooded with immigrants who will take all those places, and they’ll be pushed out when the truth of the matter is, we need those workers. Because we aren’t generating them ourselves. And if, as a result of leaving Europe with a bad deal, and the immigration has to stop, business will find it very, very difficult to cope with that.

Ryssdal: One more question about uncertainty: The prime minister does seem to have survived, for now. But that’s clearly up in the air. How worried are you about more domestic political upheaval and the Acme Whistle Company?

Topman: I’m sure that there will be lots, and I don’t like the idea of it. Who knows what regulations could ensue, what tax policies could ensue. There’s one thing I do know, is, in a long life of whistle-making, whenever I’ve seen political turmoil, I’ve never seen taxes go down, or business do better. So it does concern me, I can tell you.

Here’s the original feature on Topman from the BBC’s Andrew Bomford, who spoke to him last year, right after the United Kingdom voted to leave the European Union.