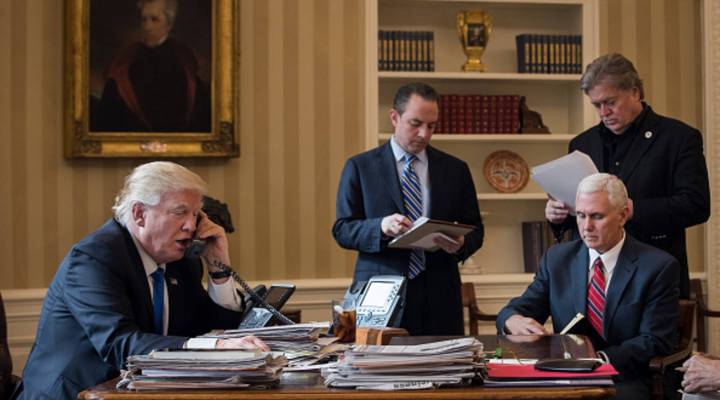 There are lots of reasons people go to work in the White House: Serve their country. Be a witness to history. Change the world. Whatever the reason, ending up in front of a grand jury or testifying before Congress is not on the list.

There’s no indication that any of President Trump’s aides, advisers or other staff will end up in court. But the prospect alone is enough to put a chill on hiring.

“Anyone who is thinking about a senior post in government in an area that might touch Russia would be thinking about this,” said Max Stier, president and CEO of the Partnership for Public Service, which works to make government more effective and also tracks government hiring.

Stier said the White House isn’t short on resumes, but this administration isn’t hearing from the best and brightest. Stier said that’s partly because of the Russia controversy. Another factor:  The White House rules out anyone who’s said anything negative about the president. And the Senate has been slow to confirm the nominees Trump has put forward.

But, Stier said, “That’s only a relatively small part of the story. At least until now there have not been very many nominations. And so unless people are nominated, it’s difficult to put the blame on the Senate and their delays.”

It can also be difficult to work in an administration that’s under investigation.

“So there is, I think, a nervousness,” said Joe Lockhart. He was President Clinton’s press secretary during the Monica Lewinsky scandal. “You do have to be careful. What you write down. What you email. What you say. For my purposes, it taught me not to take notes. And just rely on my memory. Which, thankfully, was a whole lot better then than it is now.”

Lockhart never had to testify in the investigation. And he said 98 percent of the people in the Clinton White House had nothing to do with the Lewinsky scandal. Still, everybody had to be on guard, even junior staffers.

“Not so much because you’re doing anything wrong,” Lockhart said. “But once you get into being talked to by the FBI or the Justice Department or at a congressional hearing, you more often than not need someone to legally represent you.”

And lawyering up is expensive.

But the Trump administration’s hiring problems go way beyond the White House. There are about 2 million federal workers at agencies and departments overseen by hundreds of undersecretaries and assistant secretaries. Most of those positions are still unfilled and require Senate confirmation. Without those key people pushing the administration’s agenda, “the government is going to have a tendency to kind of trundle along in the same direction it was beforehand,” said Grant Reeher, a political science professor at Syracuse University.

Add in all of the other uncertainties and distractions, Reeher said, and career government workers might be “less likely to want to work 80 hours a week. Because you’re just not sure where the whole thing is going.”

To be fair, staffing a new administration is always a challenge. And investigations are pretty routine. Watergate. Whitewater. Iran Contra. But typically, it’s hiring first, then scandals. It can be much harder when it’s the other way around.