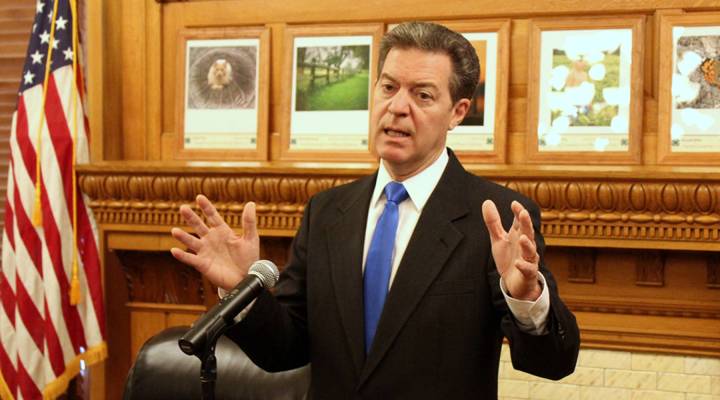 COPY
Kansas Gov. Sam Brownback pushed the tax cuts in 2012 and has defended them since. Lawmakers voted to override his veto and roll back many of those tax cuts this week. Stephen Koranda

Kansas Gov. Sam Brownback pushed the tax cuts in 2012 and has defended them since. Lawmakers voted to override his veto and roll back many of those tax cuts this week. Stephen Koranda
Listen Now

Kansas lawmakers have made a big reversal on taxes. They voted to end a five-year experiment with income tax cuts. They had to take the unusual step of overriding Republican Gov. Sam Brownback’s veto to get some of those taxes back on the books.

The cuts were passed with a promise of economic growth, but after wrestling with budget deficits, a majority of lawmakers decided they’ve had enough.

In 2012, Brownback signed tax cuts that reduced income tax rates and eliminated income taxes for more than 300,000 business owners. He said the cuts would spur economic growth while allowing the state to fund core services.

“We soon will have a new, bold course in our state’s tax policy based on the people’s ability to work, invent and create,” Brownback said at the time.

But now, Kansas has been facing a two-year budget deficit approaching $900 million, and even some conservatives who don’t like tax increases said it was time for a change.

“I look at this as bittersweet. I don’t like the bill. I hate the bill, but we have to move forward as a state,” said Republican state Rep. Dan Hawkins, who voted to override the veto.

Some conservatives pushed back, saying lawmakers should reduce the deficit with budget cuts instead of tax increases.

In the end, there were enough people who wanted to reverse the tax cuts, like Democratic state Rep. Jim Ward.

“I think it’s very exciting that Kansas is turning the page on the tax experiment. That’s over, and we’re back on the road to fiscal responsibility,” said Ward.

It’s a blow to Brownback, who has continued to defend the tax cuts, pointing to an unemployment rate below 4 percent. He said raising taxes will hurt the state’s economy.

University of Kansas political science professor Patrick Miller said Brownback made this conservative economic model his brand — a signature policy that other states could copy.

“He put all of his eggs effectively in one basket, which is an unusual move for a governor but also a very risky move that can either pay off quite handsomely or blow up in your face like it did for Sam Brownback,” Miller said.

Miller and others said that this isn’t a complete fix for the state budget. There are likely more tax and budget tweaks that will be needed in the coming years.