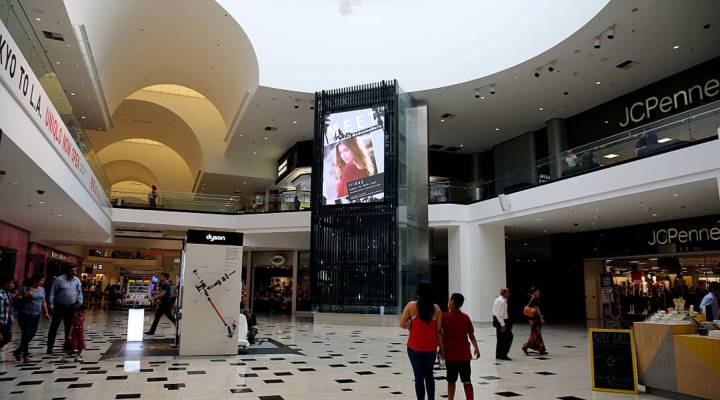 COPY
Many malls are still thriving because they’re staying ahead of the curve in the new retail reality. Above, a picture of the Glendale Galleria. Rachel Murray/Getty Images for NYX Professional Makeup

Many malls are still thriving because they’re staying ahead of the curve in the new retail reality. Above, a picture of the Glendale Galleria. Rachel Murray/Getty Images for NYX Professional Makeup
Listen Now

It’s a warm Thursday afternoon at the Glendale Galleria northeast of Los Angeles, and the mall is packed.

As online shopping surges and traditional mall retailers close thousands of stores, some malls are going away. Up to a quarter of the country’s roughly 1,200 shopping malls will close within the next five years, according to a report out last week from Credit Suisse.

Still, many malls, like the 40-year-old Glendale Galleria, are still thriving because they’re evolving with the new retail reality. Pointing out the giant Target store behind him, Gardner said the Galleria has a history of staying ahead of the curve.

“So it’s three levels, and it was the first multilevel Target in a shopping center,” Gardner said. “And we actually take a lot of pride in the fact that we do have a lot of firsts.”

The Galleria boasts the first Apple Store, first Disney Store and first Panda Express. Today, the mall is home to nearly 200 mostly mid-level stores and dozens of places to eat. It’s just across the street from another mall, the Americana, which has a majority of high-end shops. The two malls form a sprawling retail stronghold, but Gardner won’t provide specifics on store sales figures or much else.

“Well, what I can tell you right now is that we have only one vacancy in the center,” Gardner said.

But according to research firm Green Street Advisors, which tracks things like sales per square foot and vacancy rates, the Glendale Galleria is one of the country’s top 100 shopping centers. One way it’s stayed on that list is by making big changes. A few years ago, mall owner General Growth Properties spent $57 million bringing in new stores and moving existing stores around.

“We ended up moving, I think, 42 stores,” Gardner said. “Alike stores are by each other, because, you know, business spurs business.”

Stores like Skechers and Hollister, once separated for competitive reasons, are now next to each other, which makes things easier for shoppers. The mall also added Bloomingdale’s and surrounded it with luxury stores like Mitchell Gold, which sells high-end furniture.

Those replicas of national monuments made out Legos scattered around the mall? They’re not just decoration. They’re selfie-spots, geared toward landing the Galleria on Instagram.

“We’re coming to center court here, and you can see probably about a dozen people here taking pictures of what I believe is the Capitol building,” Gardner said.

The shift towards shoppertainment is only part of the solution

“Everybody’s tried everything,” said retail consultant Harry Friedman at The Friedman Group. “The malls are in trouble, no question about it. They’re trying to reconfigure as fast as they possibly can.”

Friedman said retailers also need to rethink the whole idea of a store.

“The smart guys are going to go to a much smaller footprint and absolutely have nothing on site,” Friedman said. “There will be showrooms. Retail’s going to shrink.”

Paying a lot of rent to park a bunch of merchandise at the mall doesn’t make sense when retailers can use a website and a warehouse. Customers are increasingly browsing in stores and then buying online.

“What physical stores offer is a physical environment to actually inspect, maybe feel the clothing, test drive something, listen to the stereo speakers to see how they sound,” said Anthony Dukes, a marketing professor at the University of Southern California. “That’s something that online retailing can’t do.”

The last time Dukes visited a mall was when he had to walk through one to get to a restaurant.

“I can’t even remember the last time I went to an enclosed mall for shopping,” Dukes said.

The last time he bought something online? “Yesterday,” he said.

At the Glendale Galleria, Gardner, the general manager, said the mall isn’t hurting for foot traffic. It’s the other kind of traffic he’s dealing with.

“The trouble with going to the Galleria — it’s parking,” he said.

So, the Galleria is piloting a parking app. For once, a digital solution to a brick-and-mortar problem.