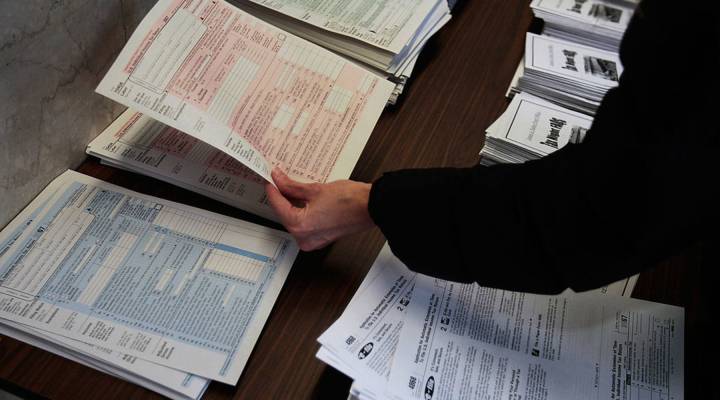 COPY
“When you're doing your taxes, you're just the IRS' lowest-paid employee,” said Austan Goolsbee, former chairman of Obama's Council of Economic Advisers. “All you’re doing is typing in information they already have.” Chris Hondros/Getty Images

“When you're doing your taxes, you're just the IRS' lowest-paid employee,” said Austan Goolsbee, former chairman of Obama's Council of Economic Advisers. “All you’re doing is typing in information they already have.” Chris Hondros/Getty Images
Listen Now

If you open the White House budget proposal and look past the headline-grabbing tax cuts and double counting, you’ll find these six words: We must simplify our tax system.

The budget proposal doesn’t specify how the Trump administration will do this, but while introducing the proposal in a White House briefing on May 23, Budget Director Mick Mulvaney suggested that making it easier to file your taxes could bring in billions in additional tax revenue by closing the “tax gap.”

The tax gap is a term for all the money the IRS is supposed to collect on time but doesn’t. There are various reasons: people make honest mistakes, or dishonest ones, or they simply file late (in fact, nearly 20 percent of the tax gap is recovered by the IRS via audits or simply with late payments rolling in, according to The Urban Institute).  The latest IRS report, issued in 2016 and covering 2008 through 2010, pegs that number at roughly $458 billion a year.

Mulvaney goes on to suggest that a simpler tax filing process would help close the tax gap.

“If you can really fill out your tax returns on a single piece of paper, ” Mulvaney said, “you’re much more likely to actually do it. It’s also easier for us to see if you’re paying the right amount.”

This seems logical: Make paying taxes easier, and more people will pay their taxes. So why hasn’t it happened yet? President Obama also pushed for a simpler tax filing system. He wanted the option of pre-filled tax returns. The argument is that the IRS already has most of the information it needs to fill out your tax return for you, whether via income information provided by your employer on a W-2 form or via interest statements from your bank, etc.

“When you’re doing your taxes, you’re just the IRS’ lowest-paid employee,” said Austan Goolsbee, a professor of economics at the University of Chicago and former chairman of Obama’s Council of Economic Advisers. “All you’re doing is typing in information they already have.”

With a pre-filled tax return, you’d still have the option to scan the tax code looking for additional credits and deductions that the IRS may have missed. But right now, 68.5 percent of American households simply take the standard deduction, according to the IRS.

“There are lots of provisions in the tax code that people don’t understand or don’t know about,” said Kyle Pomerleau, director of federal projects at the Tax Foundation. This leads to people throwing up their hands and taking the standard deduction rather than wade into the complexities of the tax code.

“If you look at the 1040EZ form,” Goolsbee said, “I believe it’s 13 lines long … and the instruction manual is 39 pages. In that world, you can understand why people say the tax system is deeply screwed up.”

Various lawmakers have introduced tax filing simplification legislation over the years. Sen. Elizabeth Warren, a Democrat from Massachusetts, has such a bill in committee right now.

“For millions of taxpayers, filing taxes could take less than a minute,” Warren said. “The IRS is seriously behind on making tax filing easier. You know, many other countries already offer taxpayers pre-filled out returns. We know how to do this.”

Warren introduced a version of this bill last year, but it died in committee. She said a powerful lobbying interest is to blame.

“The tax preparation industry makes a lot of money by keeping it hard for Americans to pay their taxes,” Warren said. “It’s the reason people buy their product.”

In 2016, H&R Block spent $3.26 million on lobbying expenses, including against Warren’s bill. And Intuit, which makes the popular TurboTax software, spent $2.39 million. Neither company responded to interview requests for this story. Mark Steber, chief tax officer for tax service Jackson Hewitt, which spent nothing on lobbying last year and very little in years previous, said that pre-filled tax returns would profoundly change his business. He opposes the idea on principle.

“I’ve never been a big conspiracy theorist,” Steber said, “but I do know you don’t let the fox guard the henhouse.”

“Once they get a letter from the IRS saying ‘You’re all right, nothing wrong with your taxes,'” Steber said, “I think an unfair amount will probably rely on that as being accurate, not taking the closer look that they probably should to see if they qualified for the hundreds of deductions or credits that they might otherwise qualify for.”

Regardless of whether tax simplification is good for taxpayers or not, it may not work to close the tax gap. The Tax Institute’s Pomerleau said Budget Director Mulvaney’s suggestion that simpler tax filing would bring in additional tax revenue is not accurate.

“You have to pair that with fundamental simplification of the tax code,” Pomerleau said.

And, he adds, the politics of passing tax simplification are nothing compared to what reforming the whole tax code would take.