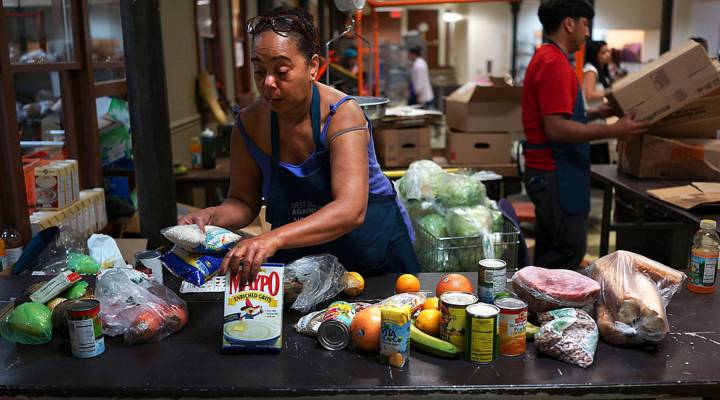 President Trump released his budget proposal on May 23, outlining how much the federal government would, or rather, would no longer spend on the social safety net. One of those programs bracing for cuts is SNAP, the Supplemental Nutrition Assistance Program, formerly known as food stamps.

Currently, 44 million people throughout the U.S. make use of the federal program, at a cost of $70 billion per year. The administration wants to cut SNAP by $193 billion over 10 years. That’s a third of the annual funding.

At a Senate Budget Committee hearing on May 25, the White House Budget Director Mick Mulvaney said: “We no longer measure success by how much money we spend but by the number of people we actually help.”

While Trump’s budget must still be approved by Congress, organizations that act as a backup plan to the social safety net, like food banks and food pantries, are looking ahead to the financial shifts that might be needed in order to bridge the gap between what the federal government provides and what people need.

And lots of people need help with their daily food supply. Stephen Leslie is an unemployed veteran who occasionally stops by a Salvation Army food pantry in Nashville, Tennessee.

“Every little bit helps,” he said. “It gets real close — you’ll come right down to the end of the month when you’re about to run out of food … I never go completely out of food, but I get low sometimes. … I eat less. I can do that.”

This food pantry is supplied by an organization called Second Harvest Food Bank of Middle Tennessee. Jaynee Day is its president and CEO. In her 29 years in the food bank field, Day has seen fluctuations in funding, and with President Trump’s proposed cuts, she’s developing a contingency plan. Right now, her food bank supplies food for 460,000 individuals that are identified as food insecure, but if funding is reduced, Day said, “we’re going to have to cut back services” at a time when people are in need.

“Hunger is not picky,” she said. “Hunger can affect any of us, at any time in our lifetime. … If we had affordable housing, if we had affordable health care and we had living wages for everyone, there really wouldn’t be a need for food banks across the country.”

Asked if she thinks her food bank is a backstop for the federally funded social safety net, Day said, “We are the safety net.”

“We were established to help meet the need when government or private industry or other organizations could not provide that need. … We are here to provide for those when nobody else can. And so I think it’s critical for our organization and for the people that we serve that we exist.”

She does dream, however, of a world in which her organization doesn’t exist.

“If we could eliminate hunger in this country, and I believe that we can, I would love it if we could close our doors and nobody needed our food assistance. Unfortunately, I don’t think that’s going to happen.”

For more from Jaynee Day’s interview, click on the media player above.