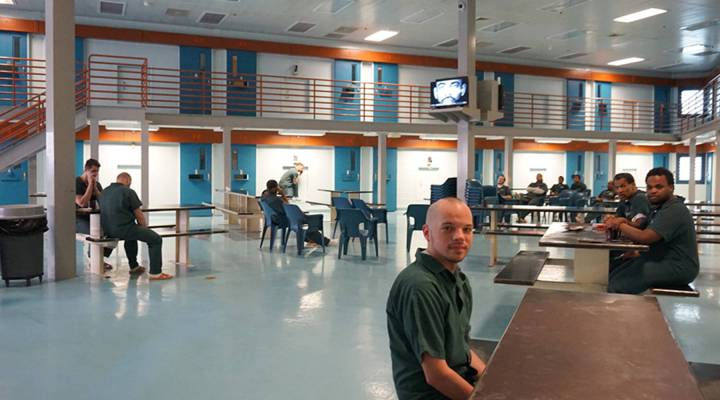 COPY
Dennis Rodgers, 29, is serving a sentence in the Erie County Prison stemming from drug abuse. A candidate for Vivitrol, he says, “This is a good shot to be completely clean.” Erika Beras
The Big Promise

Dennis Rodgers, 29, is serving a sentence in the Erie County Prison stemming from drug abuse. A candidate for Vivitrol, he says, “This is a good shot to be completely clean.” Erika Beras
Listen Now

Heidi Karash has been working as a nurse in Erie, Pennsylvania, for nearly 13 years. And to her, opioid addiction isn’t just a crisis. It’s a weight to bear.

“Its been an epidemic here in Erie,” she said.

And Karash worries she played a role in that. In her first nursing job at Erie’s Hamot Hospital, she said she treated patients who had overdosed on pain killers. She also gave those very same opioids to people in pain.

“In the hospital, especially in the ICU, we were almost more part of the problem than the solution,” she said.

And the problem has gotten worse. In the past decade, overdoses have nearly tripled in Erie. Every week, two people there lose their lives to drugs. More than half of the 700 inmates in Erie County Prison come in addicted. And if they leave and come back, its usually because they’re using again. This cycle of addiction costs Erie County nearly $20 million a year.

It’s a cycle Karash knows well. She became head of nursing at the prison about two years ago.

“Here, I can be part of the solution,” she said.

Heidi Karash, head of nursing at the Erie County Prison, stands in front of the medical records for prisoners past and present.

That solution includes Vivitrol, a drug designed to break the pattern where addicts are jailed, get clean, get released, then use again and end up back where they started. Or they end up dead.

Vivitrol is a monthly shot that acts like an opioid vaccine. The drug creates “a kind of a force field around the part of your brain that likes heroin,” said Joshua Lee, an addiction specialist at New York University. He said Vivitrol makes it impossible to feelhigh.

The hope is the drug, which is given to addicts as they are released and is being used in other prisons across the country, will curb addiction in Erie.

Vivitrol, which is manufactured by pharmaceutical company Alkermes, works “really, really well,” said Lee. “We wish we had medications like this for hypertension or diabetes or depression, but we don’t.”

But Vivitrol is a lot like other drugs when it comes to aggressive marketing and sky-high prices. Prisons and inmates get the first dose of the drug for free as they’re being released, then they’re on their own. And insurers may prefer to pay for the drug in pill form rather than the $1,000 plus monthly shot.

As Christina Paul found out, that can be an important difference.

“That’s making a choice every day to just not get high today,” she said.

Paul, a former heroin addict, lives in Erie with her two daughters. Her boyfriend got clean with the help of Vivitrol, got a job and got off Medicaid. His new insurance, though, didn’t cover the shot, just the daily pills.

“So, he did OK at first with it, but then he just kinda didn’t want to take a daily pill, so um,” she said.

Within a couple months, he was dead.

Christina Paul lost her longtime partner, Nicholas Babay, to a drug overdose when he stopped getting the Vivitrol shot.

It’s unclear how drug treatment programs that were guaranteed under the Affordable Care Act will fare under new health care legislation. But at this point, they are slated to be cut back severely, despite campaign promises by President Trump.

At the Erie County Prison, Karash said the loss of those services will only add to Erie’s already considerable pain.

“I think that in Erie, a lot of people have lost hope, and I think this last election was a sign of that,” she said.

Karash, who has spent her life in Erie, has also seen family and friends struggle with addiction. She said the region itself with its depressed economy is the biggest problem.

“So you just start using to cope with the sadness, and that’s maybe the first reason you shot up, but then you become addicted,” she said.

Vivitrol can’t fix those problems — but it can keep people from using. And Karash said at this point, that’s something.