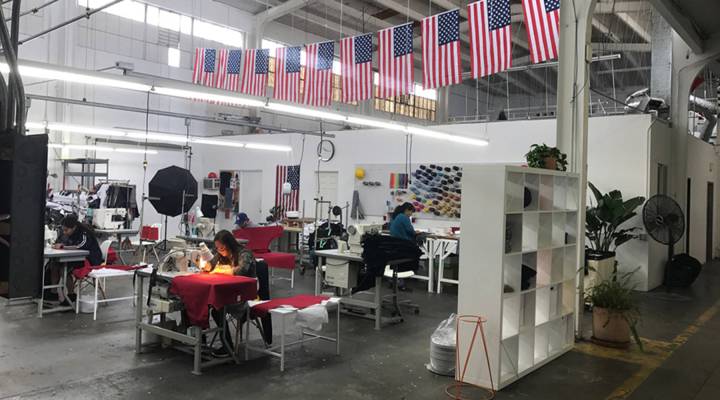 COPY
“We’re a full-blown manufacturing company…And people can come and visit. This is totally open to the public,” says Ellen Bennett of Hedley & Bennett Robert Garrova/Marketplace

Ellen Bennett said she’s always wanted her company Hedley & Bennett to be “the Nike of the culinary world.” The designer chef gear company has become a favorite of culinary giants like Martha Stewart and Alton Brown. Marketplace host Kai Ryssdal visited Hedley & Bennett headquarters in Vernon, California, and found a factory floor that was open to the public, tree-houses that were used as cubicles, and a community space with a kitchen and an espresso machine. He talked with Bennett about how she got into the apron business.

The following is an edited transcript of part of their conversation.

Ellen Bennett: Well, I’ve always wanted to be like the Nike of the culinary world.

Bennett: So hairy. I really wanted to, basically, outfit people and give them a sense of dignity and pride in the kitchen which didn’t exist. I was a line cook myself.

Ryssdal: That’s right, we should say “you know of what speak.”

Bennett: Yes. I was a line cook at Providence and Baco Mercat here in L.A. and we would get our buns handed to us every night and working seriously long hours trying to become a chef. And [I thought], gosh if only I can make a uniform that I can wear and put on, and have some dignity and pride, and hold my head up higher when I cook for myself and my team.

Ryssdal: Is it true that you started while you were still cooking.

Bennett: Yes I was very still a cook. My chef at Baco came up to me and he’s like “Hey, there’s a girl, she’s going to make aprons, do you want to get in on that order?” And I was like “Chef, I have an apron company now, I will make you those aprons,” and I totally had nothing. I clocked out and I ran around town trying to find fabrics.

Ryssdal: And were you like sewing them yourself and the whole deal?

Bennett: No, I don’t know how to sew.

Bennett: So yeah. I bartered with people. I was working at two great restaurants right so I was like “I’ll come and make you dinner, if you make me a pattern. I’ll make you breakfast, if you make me the apron cut.” And that was how I got the first one off the ground.

Ryssdal: And you’re doing well. I mean seven figures is what I saw, right?

Bennett: Yeah. We’re in of over 4,000 restaurants in the U.S. And this year, we’re launching in Williams-Sonoma and Sur La Table. So yeah, and we’re in Whole Foods too.

Bennett: Well, yes. We work our butts off, to say that lightly.

Ryssdal: This is so interesting. When did you go from line cook to entrepreneur?

Bennett: I think I was sort of born that way. I don’t think I became an entrepreneur because of  Hedley & Bennett; I think you have it in you, and you have that drive and hustle, and it’s just sort of a piece of you. But that moment when I told my chef that I would make him those aprons, I think that that was a very strong marking point in my life as a, I don’t know, hooligan-slash-entrepreneur.

Click on the audio player above to listen to the full interview.