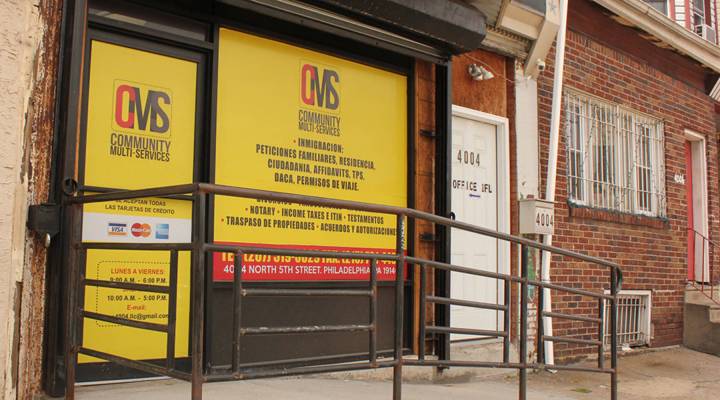 Ricardo Mejia runs a business that offers help translating documents and filling out forms, from divorces to immigration paperwork. He recently put up a new sign up in the waiting room of his office that clarifies, in English and in Spanish, that Mejia is not a lawyer and cannot give legal advice.

“I’m not allowed to provide assistance either, so just what I can do is just fill out forms based on information provided by the customer,” he said.

This sign was required by a 2014 Philadelphia city law regulating non-attorneys advertising immigration services. Mejia said he wasn’t aware of the statute until he received a recent visit from a representative of Philadelphia’s commerce department.

Wendolyne David, business services manager at the city, began visiting offices like Mejia’s earlier this year as part of a program to inform companies of the rules. Another sign in Mejia’s office now lists his fees for every service he provides.

The law aims to address a longstanding problem that the American Bar Association and others have noted in immigrant communities around the country: Businesses promising help with immigration applications that have, in some cases, taken advantage of clients or simply offered bad advice.

Vanessa Stine, who worked with Philadelphia to craft the law and implement it, said the new enforcement activity is well-timed to the start of the Trump administration. An attorney with the nonprofit Friends of Farmworkers, she said that whenever immigration makes headlines, immigrants concerned about the impact of new policies will seek advice.

“People are proactively seeking out legal help and representation that have never had legal consultations in the United States before,” she noted.

Stine also heads the Philadelphia-based nonprofit’s Fight Notario Fraud project. The name refers to practitioners in Hispanic communities who may profit from confusion related to similarities between the words “notary” and “notario,” which in many Latin American countries refers to someone with legal training. Stine is generally concerned with businesses whose staff lacks the training or authorization to provide the types of services they offer.

Since notarios are often located in immigrant neighborhoods, they can appear to be accessible, attractive alternatives to private attorneys who charge high fees or nonprofits that have long waiting lists for pro bono services.

However, Stine said that when immigrants turn to non-attorneys, they may face serious consequences, including deportation, in cases where notarios have advised clients to file flawed applications.

“Some people really do mean well but they don’t understand,” Miriam Enriquez, who leads Philadelphia’s Office of Immigrant Affairs, said of those who offer services to the immigrant community.

However, she added, “I do believe that there are people that know exactly what they’re doing. They know that this is a population who is vulnerable, who is very desperate to get right with the law, that they make them promises that they very well know that they cannot keep.”

Clients facing cultural barriers, especially those living in the U.S. illegally, may hesitate to report problems to government officials, making this type of consumer fraud what Enriquez refers to as “the perfect crime.”

The city of Philadelphia has committed to respond to complaints by fining businesses and referring serious violations to law enforcement. Meanwhile, Enriquez said, another key aspect is community education about “how to protect yourself,” she explained and “what red flags [immigrants] need to look out for.”