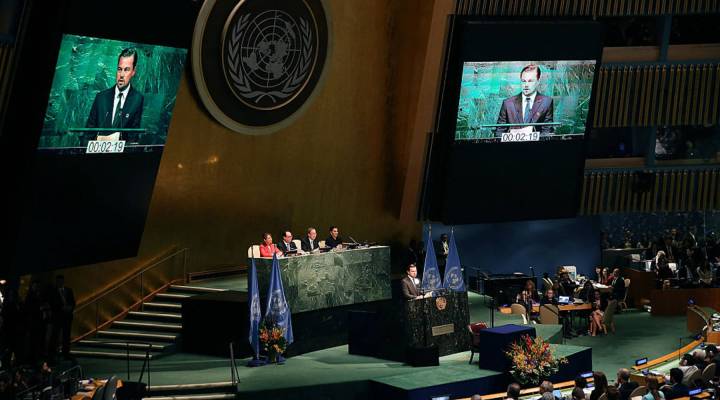 World leaders are pledging to boost their efforts to curb global warming in response to President Donald Trump’s decision to pull the United States out of the Paris climate accord. German Chancellor Angela Merkel calls Trump’s move “extremely regrettable.”  The president of the European Council says the EU and China are convinced that the U.S. decision is a “big mistake.”

Susan Biniaz served as the lead climate lawyer for the State Department under presidents George H.W. Bush, Bill Clinton, George W. Bush and Barack Obama. She was a key architect of the Paris agreement.

Biniaz talked with Marketplace reporter Andy Uhler about President Trump’s decision to withdraw from the climate accord. Here’s an edited transcript of their conversation:

Andy Uhler: How was this agreement was devised? Was it a treaty?

It’s a very flexible framework for encouraging climate action. It’s not the kind of agreement that was described today in the president’s remarks, which made it sound like the agreement imposes emissions limits on countries and imposes financial contributions. On the contrary, one of its main features is that it allows each party to determine what it’s going to do in terms of setting its own goals and setting its own goals. They’re called “nationally determined contributions.”

It’s the exact opposite of the Kyoto Protocol, where the countries that were covered by it negotiated targets with each other. So you might end up with a target that you didn’t really want but you were pushed into them. This the exact opposite. Each country came up with its own target. And if this administration doesn’t like the target that’s currently on the books for the United States, it can change it. So, I think it’s a little bit misleading to say that the Paris Agreement dictates an emissions target that’s going to ruin the U.S. economy. It’s completely within the control of the United States to change that that target any way it sees fit.

Uhler: One of the major points of contention in Kyoto was that China and India weren’t going to be involved. This is a different deal, right?

Biniaz: Absolutely. It’s very different from the Kyoto Protocol. The targets are not negotiated. They’re dictated by each country for itself. The developing countries were excluded from the Kyoto Protocol, which was one of the main reasons the United States rejected Kyoto, and this agreement does the exact opposite. Everybody’s in and you don’t have that exemption problem that you had with the Kyoto Protocol. There’s also a strong transparency regime which is something that has been a bipartisan goal of the United States for a long time, and everybody should have to report on their emissions and how they’re doing in implementing their emissions targets.

Uhler: Part of the process was setting a goal and then the country was responsible for keeping others up to date on how they’re doing in meeting the goal?

Biniaz: Exactly. So the agreement is very process oriented. It leaves the substance to each country. You have to report on how you’re doing in terms of your target. And so we call it a “process oriented agreement.” Obviously it had a long-term objective of trying to reduce global emissions and keep under particular temperature goal, but it does it through encouraging climate action rather than dictating climate action in terms of the implications of what happened today (Thursday), and pulling out of the agreement it’s not going to it’s not immediate.

Uhler: The United States can have the intent to back out of this agreement, but it’s not going to take place immediately, right?

When they say we’re not going to implement, I take it to mean two things: We’re not going to take steps to implement whatever commitments we what we might have under the agreement, whether they’re binding or non-binding. And we probably would not be participating in the in the meetings of the parties to the agreement. That’s a shame because the U.S. has been very much involved in the development of the guidelines and other ways of implementing the Paris agreement. And it will be a shame to have other countries take over that role.

We played a substantial role in shaping the terms of the agreement and we’re giving up that role. That role will be taken over by other countries whose interests may not be exactly the same as ours. China will take on a greater role. We did a lot of cooperation with China on climate change. But we also stood up to China in a way that other countries may not necessarily be able to.

Uhler: The president said this agreement would harm the economy in terms of jobs an overall lag in the economy. Is that what data you’re you’re seeing indicates? Where is this coming from?

Biniaz: I’m not really sure. It may derive from an analysis of the existing U.S. target under the Paris agreement, but even then I’m I’m just not sure whether that’s an accurate assessment. In any event I think the main point is this administration doesn’t like the target. But it can change it to something that it thinks is consistent with U.S. economic growth and jobs and all that. So the notion that Paris dictate a particular impact on the U.S. economy is just false.

Uhler:  Is this going to dictate the way that we deal with other countries?

Biniaz: My suspicion is that it will have a much more substantial impact on diplomacy than even the Kyoto Protocol. I think with the Kyoto Protocol, even though countries may have disagreed with the Bush administration, they could understand why the United States had to reject that agreement because it excluded developing countries and the target in it was too stringent compared to what the administration had put forward. This is a totally different situation. The Paris Agreement addressed every one of those problems with the Kyoto Protocol, and so it really will not be understandable. It’s kind of inexplicable why the U.S. has to reject this agreement. You can change your target the financial contributions are voluntary. So this notion that the U.S. taxpayer is being robbed and that our economy is going to be crushed by the or by the U.S. emissions target under the Paris agreement is just not right. I think the repercussions will go way beyond the climate arena.

Uhler: Are there any economic pitfalls of pulling out of the Paris agreement?

Biniaz: What I hear from from major companies in the United States is that they’re better off having the U.S. in. I think they think they’re going to lose out on certain markets in terms of clean energy technologies, renewables, etc. There might be economic sanctions taken against the United States as a non-party to the Paris agreement. You absolutely have to look at both sides of the equation.

Uhler: If there’s a new administration in 2020 and the U.S. wants back in the agreement, do you think other countries will be game?

Biniaz: Our credibility has definitely been thrown into question. We negotiated Kyoto and then we didn’t join. We negotiated Paris and them we’re going to withdraw. So there would be an  understandable reluctance to engage with us fully.

But I do think we should be given another chance if a new administration comes in and decides to re-enter the Paris agreement.

Uhler: As someone who just left the government and the State Department and is now teaching, are you are you happy that you’re out of this equation? What’s your what’s your take, personally, on what’s happened.

Biniaz: I am I’m very disappointed at the outcome, not because I personally worked on it, but because I think it’s a real mistake mainly from a diplomatic point of view. I think the climate will not necessarily be affected that much. In fact, U.S. withdrawal may even catalyze more action on the part of U.S. cities and states and other countries may have even more resolve to do more as a result of this act.

But I think from the point of view of U.S. foreign policy, this was a huge mistake and a very unnecessary act. We could have protected all our interests sitting inside the Paris agreement and making whatever adjustments we wanted to with respect to our own target and our funding contribution. So, I think it was a self-inflicted wound.

We were looking for an agreement where you determine your own targets, were the targets and not legally binding, where everybody’s in, including China and India, and where there’s robust transparency. All four of those are absolutely the way the Paris agreement came out. So, to throw this away is just kind of shocking from a public policy point of view.