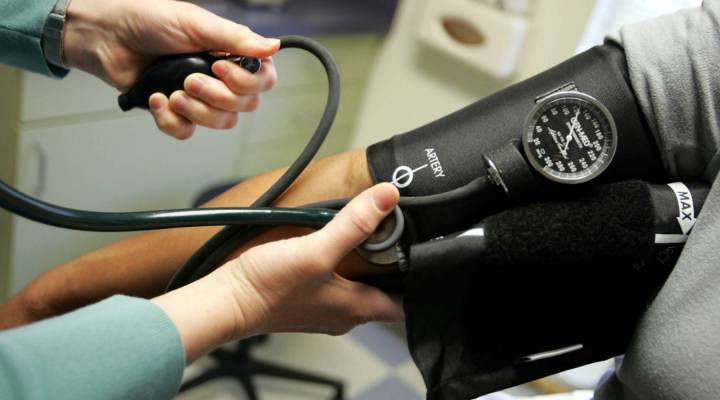 Six months ago, John Halamka surprised himself while taking his blood pressure. It was very high: 170/100. Halamka wondered how that could be, given how seriously he takes health and fitness. “I’m a vegan, with a body mass index of 21,” he said.

He thought it could be work stress caused by his job as the chief information officer at the Beth Israel Deaconess hospital system in Boston. Or perhaps his diet. Whatever the cause, he called his doctor.

“My primary care physician said, ‘Let’s measure your blood pressure over the course of the day,’” he recalled.

For $125, Halamka bought himself a blood pressure cuff and an EKG device to monitor his pulse, and took the measurements early and often, “before and after the commute, before and after a cup of coffee.”

He sent the data from those devices through his phone to the doctor’s office.

“My doctor was able to say, ‘You know, it isn’t your life. It isn’t something you are doing. It’s your genetics,” he said.

With an instant diagnosis, he had a prescription for beta blockers in hand that day.

This dream scenario explains the optimism behind market research firms’ predictions that home health devices will grow into a $100 billion industry in five years. Companies have noticed delivering results in less than 24 hours — results that right now can take weeks — could be a gold mine.

“The technology is just developing so fast that people are having trouble keeping up with it,” said Kathy Dion, managing editor of Home Health Technology News.

She said manufacturers are cranking out devices to treat diabetes, chronic obstructive pulmonary disease and high blood pressure. Physicians like them because they want to see what’s happening across a patient’s life, beyond what they measure in their exam rooms.

“If you follow a cohort of people who have blood pressure that’s out of control, they’ll have many more bad outcomes such as stroke, kidney failure, heart attack,” he said. “If you take the same cohort of individuals and you are able to control their blood pressure, they will have fewer of those events.”

Kvedar said a sliver of doctors and hospitals, maybe 10 percent, have gotten serious about home monitoring.

Others have been less enthusiastic. There are a number of reasons why. One is that the devices kick out a bunch of data, and it’s tough to focus on what’s relevant through the noise. There’s also little financial incentive to adopt the practice.

For patients, there are several obstacles getting in the way of home health monitoring.

“What we find right now is a number of people who are very much in need of the service, are either, don’t want to buy the cuff, can’t afford the cuff, don’t even know what it means to download an app,” Kvedar said.

The other issue: the lack of a business argument. Kvedar said no one has demonstrated this approach will save money at scale.

It sounds like it should. And maybe it will. But it’s not there yet.