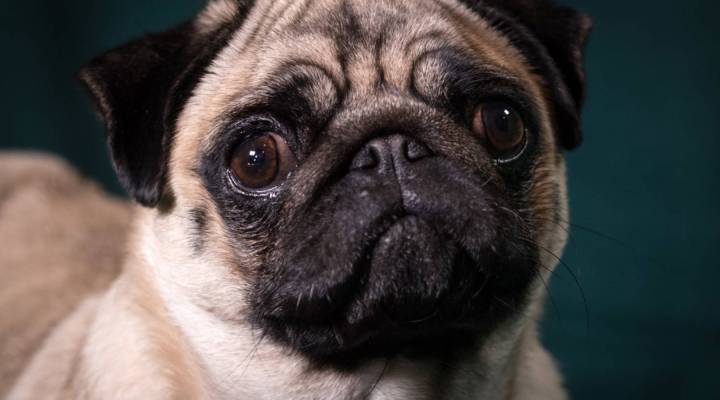 A statue of a pug appeared next to "The Fearless Girl" statue this Memorial Day. Matt Cardy/Getty Images

A statue of a pug appeared next to "The Fearless Girl" statue this Memorial Day. Matt Cardy/Getty Images

A pug has entered the fight brewing on Wall Street. On Monday morning, a statue of a pug appeared on the scene, with the animal relieving itself on “The Fearless Girl” statue.

Things have been heating up between “The Fearless Girl” and “The Charging Bull” ever since the girl made her appearance shortly before International Women’s Day. The statue was intended to be a symbol of female empowerment, but its critics insist that it’s an advertisement ploy. “The Fearless Girl” statue was commissioned by State Street Global Advisors, an investment firm whose 11-member board has just three female members.

“It has nothing to do with feminism, and it is disrespect to the artist that made the bull. That bull had integrity,” Alex Gardega, who designed the pug statue, told the New York Post. He added that his statue was poorly designed to further insult the artwork he was protesting. “I decided to build this dog and make it crappy to downgrade the statue, exactly how the girl is a downgrade on the bull.”

The newest statue — which has been dubbed “The Pissing Pug” and “The Sketchy Dog” — was only in place for about three hours, according to NBC New York.

“I took it away personally,” Gardega told NBC. “I didn’t want to leave it to be taken and certainly had no rights to bolt it to the ground. Most people were amused or perplexed by it.”

Both “The Fearless Girl” and “The Charging Bull” appeared on the street overnight without prior permission. Since it appeared in 1989, the bull has become an iconic representation of Wall Street. At the time, artist Arturo Di Modica gave the bull statue to the city in hopes of lifting its spirits after the 1987 stock market crash.

While his bull is a symbol of strength, “The Fearless Girl” is just an advertisement trick, Di Modica said earlier this year.

He is not entirely wrong. According to calculations by Apex Marketing, in less than two months, the excitement around the statue has resulted in about $7.4 million worth of free advertising for State Street Global Advisors. Every time news organizations write about the statue or people post a selfie with it, that is considered free publicity for the company.

A woman poses for a photo with “The Fearless Girl” across from the iconic Wall Street charging bull. All those photos and selfies add up to a whole load of free advertising.

What’s more, this latest update in the girl versus bull saga is likely to lead to additional free advertising — the opposite of what Gardega intended.

The week that Di Modica held a press conference to announce that he was considering legal action against State Street Global Advisors, the firm’s social media mentions spiked. In fact, they reached levels equivalent to the mentions achieved during the week when New York Mayor Bill De Blasio announced that the city had issued a permit for “the Fearless Girl” statue to remain on Wall Street for another year.

Di Modica is currently suing the firm for trademark and copyright infringement.