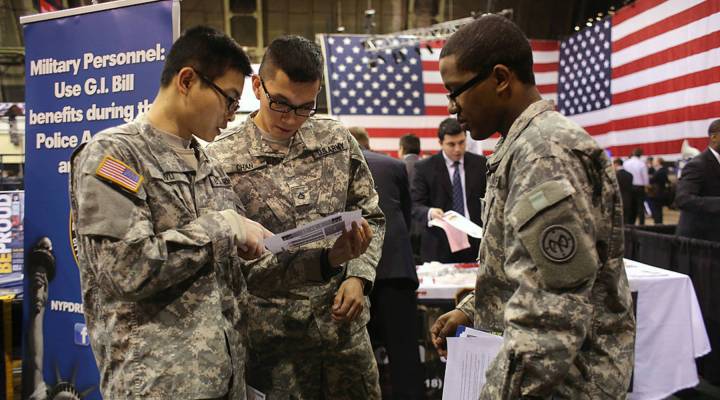 Tommy Diaz was looking to make a career move after graduating community college in 2008, so he joined the U.S. Army. In 2010, he was deployed to Bagram, Afghanistan, where he worked in military intelligence.

The job was high pressure, but Diaz knew it mattered. He picked up important skills, but he struggled to put those skills to work when he came home to Southern California. He got his first full-time job tracking inventory for an aircraft parts supplier.

“I did that for about 10 months, but I just got bored of it,” Diaz said. “It just felt like a dead end. It wasn’t clicking. I was a cube monkey, just hashing out reports, and I wanted to do more.”

So, he left. And Diaz isn’t alone. A 2016 survey by the U.S. Chamber of Commerce Foundation found that 44 percent of veterans left their first post-military job within a year.

The unemployment rate for U.S. military veterans is down from nearly 9 percent back in 2010 to just above 4 percent today. Thanks to a big push from the federal government and a bunch of corporate initiatives, U.S. companies have done a good job hiring veterans in recent years, but keeping them is another story.

Many leave because they have trouble matching military skills to job requirements or finding a sense of purpose in the job. But for many vets, the very experience of being in an office causes problems.

“It just becomes kind of a minefield of how to interact with people,” said Emily King, author of “Field Tested: Recruiting, Managing and Retaining Veterans.”

King has been hired by companies to help integrate veteran employees. She said it’s hard for them to reorient from the military way of doing things.

“An attitude where the mission comes first and interpersonal communication and effectiveness come second is not usually effective in a civilian environment where they tend to pay as much attention to how you do something as to what you do,” King said.

Some veterans’ service providers say the recent push to get companies to hire veterans has actually unwittingly played into the turnover problem.

“They’re looking more into quantity than they are into quality,” said Mark Brenner, of Los Angeles nonprofit Veterans Career XChange. “If you have to put 40 people to work, they’ll put them to work wherever they can.”

So, vets are thrown into jobs they’re not prepared for, or jobs they don’t see a future in. Brenner said if we need people to volunteer to fight wars, helping them find meaningful careers when they get back is crucial.