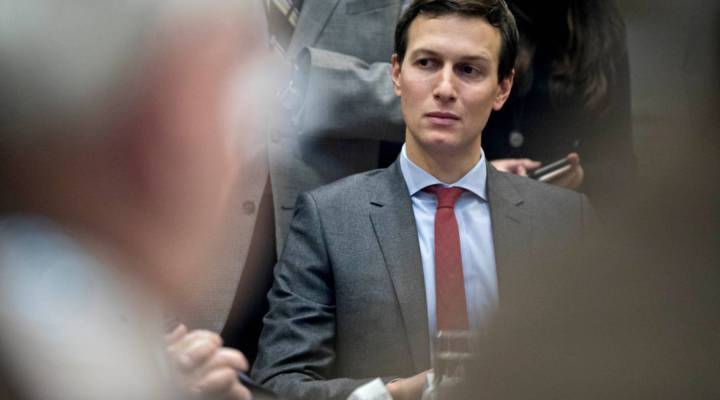 Jared Kushner is the son-in-law of the president of the United States, a senior official in the Trump White House and, according to some reports, a person of interest in the FBI’s investigation of the Trump campaign and Russian interference. He’s also a big name in commercial real estate. Although he’s stepped away from a formal role managing his family’s real estate businesses, he’s still a beneficiary of the company and its investments.

ProPublica reporter Alec MacGillis spent time at some of the Kushner Companies’ lesser-known properties for a story in the New York Times Magazine this weekend. He talked with Marketplace host Kai Ryssdal about what he learned. Below is an edited transcript of their conversation.

Kai Ryssdal: Just as a way to get going here, give me the background on the Kushner Companies and specifically Jared’s role in those companies in that family enterprise before the election.

Alec MacGillis: Well, the Kushner Companies is a major real estate company that goes back decades back to Jared’s grandfather, and we think of them usually as a company with these very fancy high-end holdings. But in fact, they also have these very modest downscale holdings around the country that Jared himself bought. He made these purchases in 2011, 2012, soon after the recession and just got them at a real bargain and saw them as a good investment that would produce a steady revenue stream.

Ryssdal: The thrust of the piece in the Times this weekend is the extent to which and the vigor with which Kushner Companies and their subsidiaries go after and collect the debts from some of these tenants. Tell me about Kamiia Warren.

MacGillis: So, she was single mom who had three kids. Back in 2010, she was living in one of these units and she decided to move out. Couple years later, a process server comes to her new house and says, “You are being sued for several thousand dollars because you broke your lease.” And she’s very confused by this because she had not broken her lease. She had gotten written permission to move. But she was also confused because the company that was suing her was a company she’d never heard of. Turns out, that the Kushner companies had, in the intervening time, bought this complex. And they had basically gone back through the records looking for any former tenants that they could possibly go after for more money — anyone who had broken a lease or owed back rent when they had left, even if it was two or three years earlier. And one of the people they swept up in this sort of clawback was Kamiia. And they went after her. She went to court. She unfortunately did not have a copy of that signed form anymore, and the judge sided with the company and she ended up getting a judgment of almost $5,000 when all the different interests and fees and late fees and court costs and attorney’s fees were piled on.

Ryssdal: And her wages were garnished right? Her bank account gets garnished.

MacGillis: Exactly. She got wiped out. She finally did get a copy of the form and she brought it to court and said, “Here, I’ve even got the form,” but even that didn’t help. And the judgment stood. She’s now got a court lien against her, which has completely destroyed her credit record.

Ryssdal: You called the company. What did they say?

MacGillis: Company said that this is just how it works. Basically, it was remarkably businesslike, almost brusque response from the company saying, “First of all we follow industry standards in these matters. Second of all, these are contracts that are signed by the tenants and they owe us this money, and if they break a lease we’re going to come after them.” In the case of Kamiia Warren, they had no specific response. They said, “We decline to comment on that particular case.”

Ryssdal: There are anecdotes like that throughout the piece and included in many of them was the question you asked of whether or not they knew Jared Kushner was, at some level of remove, their landlord. What did they say?

MacGillis: Almost nobody had any idea that he was their landlord. They were stunned when they found out. And a lot of them in fact did not even know who Jared Kushner was. I would say, “Are you aware that your complex is owned by Jared Kushner or the family of Jared Kushner?” And that name often meant nothing to them. It was only when I described Jared Kushner as, you know, the husband of Ivanka, then they made the connection and then it really sank in. One of the things that comes through in these complexes is just how completely disconnected people in this realm are politically. So many people I spoke to did not vote at all. These are people living right on the edge of a mid-size city right on the East Coast, 40 miles from Washington, and they’re very cut off politically. It’s another reminder of just how great the sort of disconnect is in the lower tiers of our society.