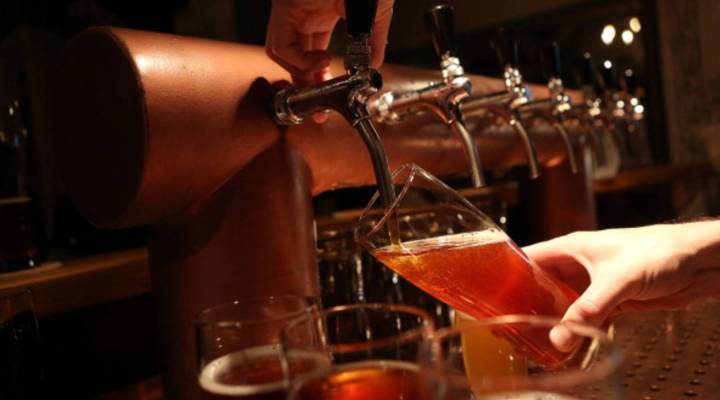 COPY
"I found across all these occupations is this renewed attention to detail," says Richard Ocejo, an associate professor of sociology at John Jay University and the The City University of New York. "They really reinvigorated them with this sense of meaning, this sense of craft," Adam Berry/Getty Images

"I found across all these occupations is this renewed attention to detail," says Richard Ocejo, an associate professor of sociology at John Jay University and the The City University of New York. "They really reinvigorated them with this sense of meaning, this sense of craft," Adam Berry/Getty Images
Listen Now

What makes a job “cool?” That’s the question behind Richard Ocejo’s book, “Masters of Craft: Old Jobs in the New Urban Economy.” Ocejo, an associate professor of sociology at John Jay University and The City University of New York,” interviewed bartenders, distillers, barbers and butchers to understand why these folks pursue a craft service career. Ocejo even joined the bandwagon and got a job as an intern butcher at Dickson’s Farmstead Meats in New York. Marketplace host Kai Ryssdal spoke with Ocejo about his research and his job. An edited transcript of their conversation follows.

Kai Ryssdal: I want you to start by telling me about how to make hamburger patties at Dickson’s Farmstand Meats in Chelsea Market.

Richard Ocejo: Well, you have to start by grinding out your trim. Then grinding it out another time, a little coarser, with 20 percent of the weight with bacon ends. Get it a little bit coarser, and then you have your ground meat for your hamburger patties. So then you want to roll them up into a ball, good and tight. No cracks in there. And then you put it in the press, press it down, and hopefully that’s what you have. You have a perfect patty. Took me a little bit to learn that.

Ryssdal: It’s a great passage in the book, you learning how to make a hamburger patty. But it sort of goes to the heart of this book, which is all about, as you say in your subtitle, these old jobs in the new urban economy that are a combination of hip and very crafts based. They’re hard to get right, as you demonstrated, and still quite popular, too.

Ryssdal: And they are, as you point out in the book, and these are basically your words, they’re not the good jobs that people want their kids to get, right? These are college-educated, 20- and 30-somethings going into what is in essence blue collar service work.

Ryssdal: The thing about Jake and all these folks who have done this, and you say this in the book, and it’s a little bit counterintuitive, because they are the ones who have options in the labor market. They have the luxury of it, right? As opposed to somebody who’s doing this for subsistence.

Ocejo: I really expected to see them kind of moonlighting, doing it, say, out of some kind of hipster irony or something like that. These are very serious pursuits that they wanted to be doing, and they could have been doing something else, so they were making these sacrifices, really. And if it didn’t work out, well, they did have options going forward. But for a lot of people who are in the service industry in general, that’s not really the the option that they have. They get these jobs because they can. But it’s not necessarily something you would equate with upward mobility or anything like that.

Ryssdal: Which goes to the next question, which is: They’re riding the trend now, right? Where to be a craft distiller or a craft whole-animal butcher is, you know, the ‘it’ thing now. But in 25 years, where are these folks going to be?

Ocejo: That’s a great question. Right now we have a solid generation of urbanites who really kind of expect to go to a bar and see a cocktail menu. And you know, we’ll see if this next wave of young newcomers to the city had the same expectations, are going to want the same things. That will probably determine whether or not these occupations are sustained beyond the next decade or so.