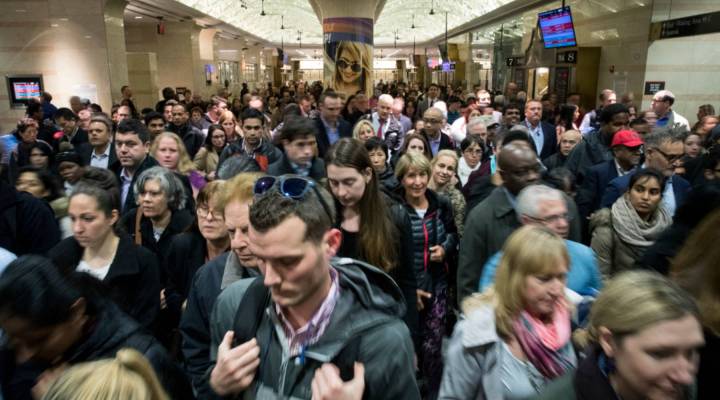 The busiest stretch of road in the entire country is Interstate 405 in Los Angeles, which carries more than 350,000 drivers a day, according to the U.S. Department of Transportation. But on the East Coast, a single train depot handles nearly twice as many people every day.

“It always adds hours,” said Joe Peterson of Ronkonkoma, New York. “What are you gonna do? Can’t fight it.” Peterson said he’s late to work on a regular basis, no matter how early he leaves.

The ripple effects of Penn Station delays affect the economy of the whole East Coast, according to Mitchell Moss, director of the Rudin Center for Transportation Policy & Management at New York University.

“The entire productivity of the Northeast relies on the movement of people in and out of Boston, New York and Washington, and even further down into Florida,” Moss said. “So unless we have a functioning Penn Station, there’s a severe problem for the movement of people, and this means that the economy slows down.”

Moss said the underlying problem is that Penn is actually three train stations rolled into one: Amtrak, New Jersey Transit and the Long Island Rail Road all share the same tracks. This makes delays and congestion inevitable at Penn Station. Or, as New York state Sen. Todd Kaminsky refers to it, “the bane of [his] constituents’ existence.”

“New York Penn Station is at the heart of the Northeast corridor, which is the most important revenue-generating component in Amtrak,” said President and CEO Wick Moorman.

“I’ve had constituents call me from the bathroom of trains,” Kaminsky said. “They’re literally sitting in the bathroom because there are no seats. That’s something you would hear in a different country.”

According to a report from New York’s state comptroller, delays and cancellations on the Long Island Rail Road alone cost the region $60 million in lost productivity last year. Now Amtrak, which owns and operates Penn Station, plans to close down a quarter of the tracks this summer for overdue maintenance work.

Kaminsky said the timing couldn’t be worse. “We on Long Island really depend on a summer economy,” he said. “So to say that, “Hey, this summer we’re going to take your trains offline,” could really be devastating to the Long Island economy that relies on city people coming out.”

But in general, commuter traffic dips over the summer. So while it might hurt the Long Island beach scene, a summer closure will affect the fewest number of riders overall.

Perhaps no one has more to lose at Penn Station though than Amtrak itself.

“New York Penn Station is at the heart of the Northeast corridor, which is the most important revenue-generating component in Amtrak,” said President and CEO Wick Moorman. “It’s literally at the heart of what we do, from a financial standpoint.”

Moorman said that because of Penn Station’s centrality to the company, Amtrak has more incentive than anyone to improve conditions there. But others think the company is not invested enough. Recently, governors Andrew Cuomo of New York and Chris Christie of New Jersey issued a joint letter calling for a new, private operator to take over Penn Station. And Cuomo has reached out to President Trump for federal funding, calling Penn Station an “emergency situation.”

Moorman said neither funding nor Amtrak’s management are the problem.

“The fundamental problems at Penn Station have to do with the fact that it is at or beyond capacity,” Moorman said. “Nothing changes that, with a private operator.”

Rather than money, Moorman said, Amtrak lacks New York’s most precious commodity. “Time,” Moorman said. “We just have to take the time to do this work and to get it right.”

But as the complaints–and the trains–pile up, Amtrak may find its time is running out.